Wagyu Edge conference: ‘No need to jump at shadows’

One topic that inevitably arises whenever cattle producers gather in Australia at present is the subject of vegan activism, and how the industry should respond to increasingly militant campaigns against meat production by protestors. 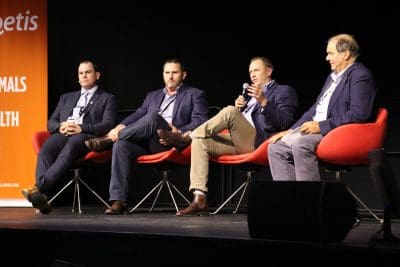 The question emerged again during a panel session at the 2019 Wagyu conference in Adelaide on Wednesday, when a producer asked if activism is likely to pose a threat to public support for long feeding operations in future.

“Our industry credentials are extremely strong,” he said.

“The vast majority of our markets are content with the standard we produce.

“Our QA systems and our verifiable stories globally are higher than anyone else in the world really.”

He said critics of the industry would continue to make a lot of noise, and the Australian cattle sector had to tell its story effectively.

He said the indsutry should be proud rather than defensive.

“An animal on feed is no worse off in terms of the five animal freedoms welfare wise.

“It is a very interesting, fast moving, significant space, but I don’t think it is an armageddon that is going to blindside us really.”

Mort & Co’s Berry Reynolds said the industry said the company would be proud to put people on a bus and show them around its feedlots, which employed world’s best protocols and management systems.

“If we all adhere to best practice as an industry and strive to be our best, we can be proactive and say we’d love to show you what we’re doing.”

Rangers Valley’s Andrew Malloy said activists tended not to target the large class one feedlots, and the message for every player, from big to small, was that “we must keep our backyards tidy”.

Kerwee Feedlot general manager Steve Martin said there was an “ultra-niche market of people who are voting with their fork” and paying premiums for higher perceived welfare. However this was also limited, as people who made a lot of noise did not always vote the same way with their fork.