A decade’s worth of progress in Wagyu cattle genetic selection and management was in clear evidence in yesterday’s 2021 Wagyu branded beef competition staged by the Australian Wagyu Association in Brisbane.

Reflecting the expanding footprint of the Wagyu industry in this country, entries in this year’s tenth annual competition were at record numbers, representing supply chains extending from Western Australia through to South Australia, Victoria and Tasmania, NSW and Queensland.

The growth in Fullblood entries reflects the growing emphasis on Fullblood Wagyu production being seen across the industry, as a proportion of overall Wagyu cattle being bred and fed.

Based on yesterday’s judging, a number of trends were clearly evident. While the Wagyu taste test is judged blind (i.e. judges were not told which class each sample came from), some reasonable assumptions could be made.

Firstly, marbling is now much more consistent, across all classes from Fullblood to crossbred and commercial, than it was a decade ago.

In the early competitions (Beef Central’s Jon Condon has sat on the judging panel for all of them) there were some good marbling performers in all classes – but equally, some entries performed only modestly. This year, with the exception of a couple of grassfed and first-time commercial Wagyu entries making their competition debut, marbling was consistently high in both the crossbred and Fullblood class. 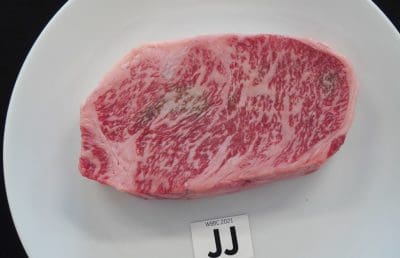 Using the Meat Image Japan (MIJ) grading camera, it was determined that the highest marbling Fullblood entry in this year’s competition was an unbelievable 15.97 marbling score, representing an estimated 52-53pc intra-muscular fat. To put that into perspective, Australia’s AusMeat marbling scores ends at 9+, while Japan measures marbling only to MS12.

This entry was the highest marbling score ever seen in this competition, and was boosted by a high concentration of fine marbling, which the MIJ camera is specifically designed to pick-up.

Only one previous entry over the past ten years in the Wagyu Branded Beef competition has produced an IMF of 50pc, previous records show.

“It means that when an entry comes along expressing a lot of that really fine marbling, it does push the IMF percentage number higher,” he said.

Yesterday’s extreme high marbling score entry was also particularly large, with an eye muscle area of around 150sq cm – right up there with the biggest in the competition.

“There’s also an interesting statistical link between the abundance of marbling and eye muscle area, which is specific to Wagyu cattle,” Dr McDonagh said. “When you get these examples with really large eye muscles that are pumped full of marbling, there is a genetic correlation.”

Is there a ‘swelling’ effect occurring, as intra-muscular fat deposit zones fill up to saturation point? Beef Central asked.

“I think there’s a bit of that to it,” Dr McDonagh said. “The abundant fat deposit is actually making the muscle size bigger than it otherwise would be.”

“Longer days on feed, and more Fullbloods in general now entering the production system might also be contributing to the presence of such carcases.”

The sheer size of the rib eyes from Fullblood entries in yesterday’s competition suggest the carcases these samples were drawn from were very large, indeed. Some may have been 550-600kg or more in carcase weight. This does present some challenges when attempting to serve a piece of Wagyu in traditional sliced steak form, chefs involved in yesterday’s judging said. 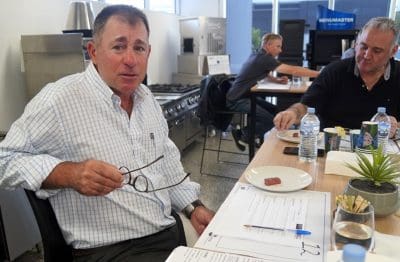 One of the judges was Matt George from Bovine Dynamics

He agreed with the premise that the abundance and consistency of marbling now being reflected in the competition has improved.

“There’s probably a number of reasons for it,” he said. “The number of Fullbloods, as a proportion of the overall Wagyu numbers on feed in Australia, continues to grow. That’s being seen in more Fullblood competition entries, but also greater evidence of that extreme high marbling performance across more entries,” he said.

“Secondly, all Wagyu beef supply chains – from crossbred to Fullblood – are now chasing higher marbling performance, for commercial reasons. There’s a lot more money in a marbling score 7 carcase than a score 6, and feedlot managers are prepared to leave cattle on feed longer, in order to try to achieve it. Demand has definitely increased for the higher marbling cattle. Lower feedgrain prices have also encouraged yard managers to do this,” he said.

During the height of the high feedgrain prices a year or two ago, some Wagyu F1 programs were winding back to 300-350 days on feed, where more of them were now out to 400 days, Dr George said.

Changes had also occurred in the way young Wagyu cattle were being set up for feedlot entry, he said.

“Because of the drought over the previous two years, more Wagyu backgrounder cattle were being fed on ‘grower’ diets including starches in smaller supply feedyards (plus some larger yards).

“A lot more of those young cattle are now coming into the feedlots straight off grass, instead of spending time on a grower ration. We’re certainly seeing some older Wagyu coming through the system as a result, which means they have been out there in the paddock on grass for longer periods beforehand.”

The impact of that could potentially be a minor drop in performance going forward.

“Physical performance in terms of growth might be a little better, but we could lose a small amount of carcase yield and the expression of marbling and marbling texture will likely be lower and coarser, in general.”

“It’s about delayed intervention in providing that nutritional support. Some of the bigger supply chains that have invested a lot of money in genetics are maintaining higher nutrition in young cattle to optimise performance, but we are certainly also seeing some supply chains that have gone back to more grass-based growing cycles, with the return to better seasons.” 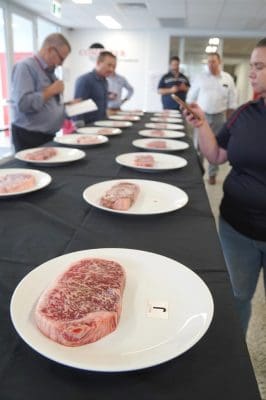 So how does Australian high-end Wagyu now measure up against the best Japanese domestic Wagyu?

Comparisons are difficult, for a number of reasons. Firstly, Japanese Wagyu are micro-managed, at an individual animal level, with frequent blood sampling for vitamin A levels and nutritional adjustment. In contrast, Australian Wagyu are fed and managed as a mob – often 100-200 head per pen – for practical commercial reasons.

Secondly, high-end A5 grade Wagyu are often fed in Japan out to 800 or 900 days, when 500-600 days is the absolute ceiling for Australian Fullblood programs, Matt McDonagh said. This means cost of production of a Wagyu beast in Japan is typically three times as high as that in Australia, although intra-muscular fat levels of up to 60pc have been recorded in high-end Japanese domestic Wagyu fed for two and a half years.

If there was a modest area of inconsistency remaining in entries judged yesterday, it was in meat/muscle texture. The coarseness or fineness of muscle varied considerably from sample to sample, despite the fact they were cut from exactly the same location on each entry.

So who were the winners from yesterday’s 2021 AWA branded Wagyu beef competition judging?

All will be revealed at the competition awards ceremony, held as a centrepiece of the AWA’s 2021 Wagyu conference on the Gold Coast from 27-29 April. Click here for details.