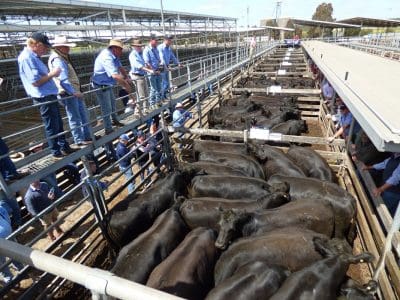 A difference-of-opinion between producers and processors over whether a Victorian cattle sale should run under pre- or post-sale weighing conditions in February 2015 triggered a Senate inquiry and ACCC investigation into competition issues in the red meat industry.

The Senate inquiry is still running, due to report in June, but the ACCC market study has now been completed.

After investigating allegations that nine cattle buyers had collectively boycotted the Barnawatha prime cattle sale in Victoria in February 2015, the ACCC said there was no evidence to show processors had reached a collective agreement not to attend the sale.

In the wake of that alleged boycott, the Victorian Farmers Federation mounted calls for pre-sale weighing to be made mandatory at saleyards throughout Australia, which it said was necessary to stamp out anti-competitive industry practices.

However, the ACCC’s ensuing investigation and report made almost no mention of pre-sale or post-sale weighing.

In a statement today the VFF said producers have been been left dismayed “by inaction on the issue” and said the livestock industry was outraged at the failure of the ACCC to deal with transparency at cattle saleyards.

“We demanded for industry practices to be investigated along the supply chain, and we got a Senate inquiry into the red meat sector, as well as a review from the ACCC,” VFF Livestock President Leonard Vallance said.

“But producers have been badly let down by the review because there was no recommendation on pre-sale weighing, which was why we had the review in the first place.”

Mr Vallance said the absence of nine processors at the February 2015 Barnawatha sale was a tactic to cause instability in the livestock industry.

He said the industry should enforce pre-sale weighing in a move to bolster transparency at the point of sale.

“It’s impossible to set a market price for cattle when saleyards don’t use consistent weighing methods and I don’t know any other industry where you can buy a product without either needing to know the volume or weight of that product,” he said.

“Backgrounders and feedlotters rely on pre-sale weighing to manage costs and margins, and determine bids but the post-sale weighing basis stops this part of the market from competing effectively in saleyards.”

“Post-sale weighing is a discriminatory practice, it’s anti-competitive, and the only way to ensure true competition in the sector is by selling cattle with their weight displayed at the point of sale.”

Mr Vallance said the pre-sale and post-sale issue had to be dealt with and said the “industry is running low on patience.”

ACCC: ‘no conclusive evidence either way’

“We certainly looked at that issue,” Mr Keogh explained.

“We didn’t have the technical resources to conduct weighing trials for example.

“We certainly understood both sides of it.

“From a farmer’s perspective the view is that it is fairer if the weight of animals is on display at the time of the sale.

“That means that they are competing on a more even basis with a professional buyer, who is much better able to judge visually the weight of livestock. We understood that argument.

“The counter argument put by the processors was that, in terms of the predictability of the yield of the animal as a slaughter animal, because of the uncertainty with pre-sale about the length of time the animal had been off-feed and water, whether it had been transported eight hours or whether it was only transported one hour, they made the claim that pre-sale created more uncertainty for them and that post-sale meant that at least some of that uncertainty was reduced.

“Their view was that post-sale was preferable because it took some of the uncertainty out of the potential carcase yield estimate, and, therefore, in their words, allowed them to pay closer to true value for the animal.”

A further complication, he said, was that some facilities were set up for pre-sale weighing, such as Wagga where cattle are weighed before they are sold through a central auction ring, while other facilities would require rearrangement of infrastructure if they were to change from one system to the other.

“So in the absence of pretty conclusive evidence either way and recognising there are two sides of the argument, that was where we landed, we didn’t come to any firm conclusion either way.

“I guess in some respects we are reflecting the views of the industry, where there is not a clear opinion there either.

“Unfortunately some of the variations in protocols around receiving animals into saleyards etc have added to the uncertainty.

“In some respects if there was more consistency around curfews maybe some of that uncertainty would disappear and the matter would be less contentious.”

Asked if the ACCC’s investigations showed strong support for pre-sale weighing among producers nationally, Mr Keogh said it seemed a lot of producers in some regions were not too concerned about the issue.

Support for pre-sale weighing appeared to be higher in areas such as north eastern Victoria where restockers were often competing more directly for female cattle with slaughter buyers, he said.