RESPECTED Queensland pastoral industry identity Sir William Allen has passed away in Brisbane. It is understood he was 89.

Widely known to his close cohort of industry friends and acquaintances simply as ‘Bill’, Sir William was a prominent member of the western Queensland grazing community, where he owned and operated large scale downs country sheep and cattle operations around Blackall, Longreach and Alpha. 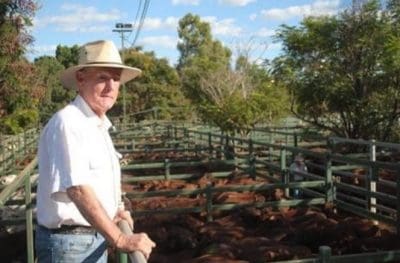 Well known properties either currently, or formerly owned included Forest Park, Athol, Malvern Hills, Evora and Mascot, Alice Downs and Sedgeford, near Alpha, sold in the 1990s to the Teys family. The Allen family bought Nukinenda near Esk, in 1963.

The original emphasis was primarily on wool production, but like many in the central west, beef became the predominant pursuit in later years. In recent years it has been almost exclusively a beef operation.

Bill Allan significantly expanded the sheep and cattle operations established by his father, also Sir William, the son of a US immigrant who died in 1977.

Sir William, who carried himself with poise and a quiet dignity, took an active interest in industry affairs, and occupied senior positions in the United Graziers Association, at state and local branch level.

Like his father, who served several terms as a sitting member in the Queensland state government, Sir William took a keen interest in political affairs, and was regarded as a senior power-broker in National Party ranks, at both state and Federal level.  He was knighted for services to the pastoral industry, politics and the western Queensland community.

As a passionate private pilot who flew for more than 40 years, Sir William was able to visit his Central Western cattle and sheep operations frequently and conveniently from his base in Brisbane.

Asked some years ago, when aged in his mid 80’s, whether he was still flying, he simply said: “I wish I was.”

Possessing a keen business sense, Sir William made a series of investments outside the livestock industries, including hotels and motels, and a significant shareholding in Brisbane radio station 4IP, at the time the state capital’s number one broadcaster. He also owned radio stations 4LG at Longreach and 4EM in Emerald.

He joined a group of fellow Central Western Queensland beef producers who embraced Santa Gertrudis cattle soon after the breed’s arrival in Australia in 1952, buying a series of high-priced bulls at early King Ranch sales held at Macquarie Downs near Leyburn to found his commercial herd.

Santa Gertrudis Stud Breeders’ chief executive Chris Todd, remembers Sir William as a passionate Santa breed supporter, who carried himself with dignity, and had a great passion for helping young people in the industry. He established the Forest Park Santa stud herd in 1986, having bought Santa bulls for commercial use for decades before that. Mr Todd said.

Former Landmark stock and property agent Brendan Wade did a lot of business with Sir William over the years.

“He was a real gentleman to deal with, and treated people fairly and squarely. For anybody who got to know Bill, a business relationship quickly grew into a true friendship,” Mr Wade said.

“He was very alert to shifts and opportunities in livestock markets that were going on, in an era before communication made that easier. He also provided guidance and sage advice to a lot of younger people in the industry. He liked to see young people getting a go.”

Veteran Queensland stock agent Jim Scully, formerly of Elders, was also close to Sir William over half a century. He spoke to him as recently as yesterday, organising a luncheon for next week.

“Bill was very loyal to those he dealt with, and those who worked with him inevitably had longevity – people were very loyal to him,” Mr Scully said.

“He was an astute businessman, and carried himself with great dignity.”

Funeral details will be added to this item when they become available.