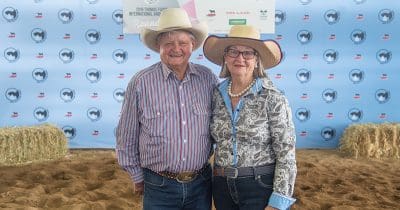 ROBERT ‘Bobby’ Gregory attended his first Royal Easter Show in Sydney in 1938, when, at the age of three years and four months, he led a prize-winning calf around the ring.

When hy was recognised as a “Show Legend” by the NSW Royal Agricultural Society at the age of 81 in 2016, he had attended every single Royal Easter Show since.

Fittingly Bobby met his wife Yvonne at the Sydney Royal Easter Show when he was just 21 and she was 16.

He was named  grand champion parader 17 times in Sydney.

Bobby, like his father, Abbey, spent his entire working life with the Munro Family of Booroomooka Angus stud at Bingara, NSW.

After his father’s retirement in 1967, Bobby took over as stud manager with Yvonne, who was always by his side on the property and the show circuit.

On its website Angus Australia said Bobby will be remembered across the beef industry as someone with a lot of dedication and passion for the beef industry, but more importantly his education of youth in the industry.

“Right up to the end Bobby was always seen ringside at any cattle event with his wife Yvonne, with the Sydney Royal Easter Show one of his favourites.”

2019 was the 80th year that Bobby attended the Sydney Royal Easter Show, with the Centenary Celebrations of Angus Australia taking centre stage at the show.

In a 2016, Sydney’s Daily Telegraph wrote about Bobby’s close to 80 year love affair with life in the show ring.

“It’s the greatest show on Earth, I wouldn’t miss it for the world,” he told the paper.