He had suffered from dementia over the previous two years, making one of his last real industry appearances at Beef 2015 in Rockhampton to catch up with old acquaintances. 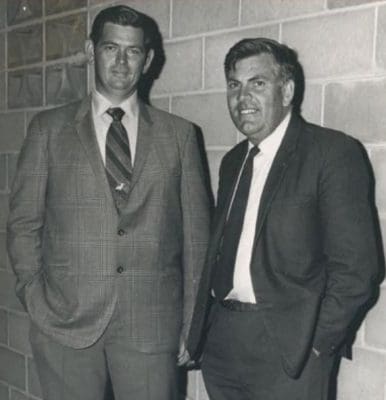 Ken Coombe, pictured right, with Bubba Hudgins from JD Hudgins during the opening of Brahman House in Rockhampton in 1981.

As one of the founders and the original chairman of Beef 88, the inaugural Beef Expo held in Australia’s bicentennial year, Mr Coombe saw the ‘one-off’ event grow into the southern hemisphere’s largest and best-known beef industry gatherings.

Ken Coombe left an indelible stamp on the northern Australian beef industry, bearing witness to and contributing heavily towards the transformation in genetics to tropically adapted cattle from the region’s original breeds.

Born in Victoria as the son of a bank manager, his first real exposure to the cattle industry came soon after completing grade 12, when working for Gordon Munro at Booroomooka Angus near Bingara in NSW.

Mr Coombe is best remembered as the head of bull breeding operations with the AMP Society’s Stanbroke Pastoral Co – at that point the world’s largest cattle enterprise.

He spent 21 years from 1973 to 1994 as general manager of breeding operations based at Stanbroke’s bull breeding headquarters, Waverley Station near St Lawrence.

Prior to that he worked for about 14 years from 1957 for Fairymead Sugar Co (at that time a large-scale beef producer using land set aside for cane production), running its bull breeding operations based near Bundaberg. Fairymead’s Avondale Brahman Stud was one of the most successful and well-known Brahman studs in the breed’s formative years, attracting large crowds and high prices to its annual on-property bull sales.

It was a transformational era when large parts of Queensland first started the move out of traditional British breeds like Hereford, Shorthorn and Devon into infusions of Bos indicus, delivering drought and external parasite tolerance and better weightgain.

On joining Stanbroke in 1973, Mr Coombe played a key role in the transformation of the Barkly’s traditional Shorthorn herds into Bos Indicus.

Early in his career, he served as honorary secretary of the fledging Australian Brahman Breeders Association from 1960 to 1968, and worked for a year for the breed society in 1972 as field officer. During his period as secretary, ABBA membership grew from 26 to 550, as early breed momentum continued to grow across northern Australia.

Mr Coombe was a vigorous and enthusiastic supporter of beef research throughout his career, engaging with CSIRO, DPI and others in countless field research trials and field days focusing on fertility, genetic selection, nutrition, pasture improvement and other topics at Waverley. In conjunction with CSIRO, early field trials in the 1970s were conducted looking into composite breeding, which major companies like Stanbroke, AA Co and NAPCo ultimately adopted years later.

He was an early-adopter of on-farm computer technology in the 1980s, establishing herd records and other data on early Commodore 64 computers using floppy disc memory.

Mr Coombe earned an Order of Australia Medal for services to the beef industry around 1990.

He is survived by four sons and a daughter – Brett, Mark, Geoff Ian and Susan.

Relatives and friends of the late Ken Coombe are invited to attend his funeral service at the Rockhampton Crematorium, 440 Yaamba Road, Norman Gardens, Qld, Tuesday November 19 at 11am. The service will be followed by a wake at the Rockhampton Leagues Club, Cambridge St.