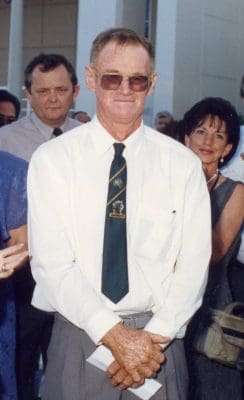 One of the pioneers of Brahman cattle breeding in northern Australia in the late 1960s and early 1970s, Mr Lansdowne and wife Anne ran the successful Kumbidgee Brahman Stud from their Katherine River property of the same name for many years, selling herd bulls widely across the Northern Territory and into Western Australia.

Most of the cattle in the Territory at the time were Shorthorn-based, but the tropical adaptation and production advantages offered by Brahman cattle quickly caught on.

Mr Lansdowne spent a lengthy period as a director of the Australian Brahman Breeders Association, including terms as president. He was later made a Life Member of the ABBA.

He was also a foundation member and later president for 15 years of the NT branch of the Australian Stock Horse Society, established in 1972, breeding, drafting and selling a string of top working horses over many years. By 2012, the NT branch of the ASHS had more than 170 members, with eight society inspectors covering the NT and Kimberley region.

He made countless contributions to the local NT community, chairing the Katherine Show society, sitting on the NT Land Board and the Conservation Commission, and chaired the Bushfires Council and Katherine Rural College board.

Mr Lansdowne judged Brahman cattle and stock horses across Queensland and the NT for many years.

He was the quintessential top end cattleman – tall, ramrod straight, quietly spoken, modest but self-assured – but with a great instinctive knowledge of the challenges involved in running cattle in the tough territory conditions.

Born in Murrurundi in NSW, he headed to the territory as a ringer in the mid-1950s, working firstly for the Australian Agricultural Co at Avon Downs on the Barkly, and later on Auvergne and Newry near the Western Australian border.

The Lansdownes later moved from Kumbidgee to Maryfield, a larger property near Larrimah south of Katherine, and after 40 years in the territory, returned to Queensland, buying Soutterwood, a property west of Emerald.

The Lansdownes retired to Toowoomba five years ago.

Mr Lansdowne is survived by his wife Anne, son Kim, who remains at Soutterwood, and daughters Megan and Robyn.