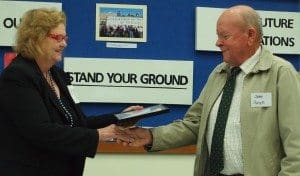 The Australian cattle industry is mourning the loss of one of its most respected leaders following the passing overnight of former Cattleman’s Union of Australia and Property Rights Australia president John Purcell OAM in Rockhampton.

The Central Queensland cattleman lived by the motto “stand your ground” and was widely respected as a steadfast and fearless advocate for the cattle industry and a determined and fearsome adversary for those on opposing sides of debates.

“In his heyday at the Cattleman’s Union he was a renowned orator,” long time friend and CU and PRA colleague Ron Bahnish recalls.

“He could command an audience, and when chairing meetings of up to 1200 people it was noted that he had ability to address near everyone from the stage by first name.”

Mr Purcell was an inaugural member of the Cattleman’s Union and was twice chairman of the organisation, which merged with UGA and GrainGrowers in 2000 to form AgForce.

As a leader of the CU one of his notable achievements was the role he played in negotiating the Cape York Heads of Agreement. “Reconciliation between indigenous and non-indigenous Australians must be founded on justice, if it is to be durable,” he said at the time.

He also served on the Cattle Council of Australia and was a president of Property Rights Australia.

In 2012 Mr Purcell was recognised with an Order of Australia Medal for his service to agripolitics, particularly the Cattleman’s Union of Australia and Property Rights Australia.

Mr Purcell drew the property “Yatton” near Marlborough in a ballot in 1960 and developed it over the past 55 years while also devoting large amounts of time to representing the cattle industry on regional, state and national issues.