Jim (later Sir James) Balderstone, who left an indelible stamp on the northern Australian meat and livestock industry over five decades, died in Melbourne this week, after prolonged ill health. He was 93. 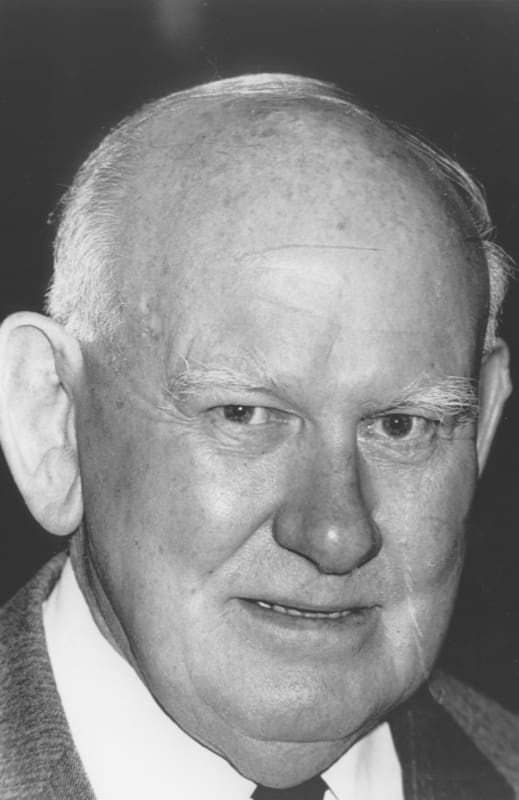 As the founding managing director and later chairman of Stanbroke Pastoral Company, Jim Balderstone was responsible for establishing many of the land and cattle management systems and conventions later adopted by the nation’s largest pastoral companies across the top half of Australia.

Stanbroke, under his astute guidance, grew from small beginnings in 1964 to become the largest cattle enterprise in Australia, and probably the world, at that time. The expansion was heavily backed by Stanbroke’s owner, the AMP Society, and in Jim Balderstone, they had found a man capable of delivering on the company’s vision.

Jim Balderstone, or JSB as he later became popularly known, was born in Melbourne in 1921. He and his twin brother, Bob, were the youngest of six children. His education at Scotch College, Melbourne, finished in 1939, two months after the outbreak of World War II.

The Balderstone family lived in Melbourne and had a grazing property at Moulamein in NSW. Bob, being more attracted to day-to-day, hands-on stock management, went to Wagga Wagga Agricultural College with a view to eventually assuming management of the family property.

Their father, James Schofield Balderstone, was the general manager of Thomas Borthwick and Sons Australasia Pty Ltd from 1911 to 1945, a meat processing company headquartered in London with operations in the UK, Australia and New Zealand. It was to NZ that a young Jim was sent as a raw-boned recruit for his first job with Borthwicks.

It was a fairly short-lived study and employment period, as at the end of 1940 Bob joined the Army and Jim, the Navy. Both were away serving their country for the next five years.

Jim rejoined Borthwicks in 1945 and was based at its Melbourne office for a year before being transferred to Brisbane only a month after his marriage to Mary Tyree. Their eldest son, James, was born in Brisbane, followed by Susan, Elizabeth and Richard, all born in Melbourne.

It was this move to Queensland that was the catalyst for Jim’s interest in the northern Australian cattle industry, as in his role, he had to visit Borthwicks’ livestock suppliers. These trips took him away around the state for five or six weeks at a time.  The Borthwicks company at the time owned four cattle stations in Queensland and Jim’s interest in this area of the company’s operations saw him placed in charge of the properties as part of his duties.

He became enthusiastic about the prospect of Borthwicks buying more properties to enhance its cattle supply, but the only cash available at the time was required to maintain and update the company’s processing plants at Murarrie and Bowen in Queensland; Albany in Western Australia; Mt Gambier, South Australia; and Portland and Brooklyn in Victoria.

Jim continued with Borthwicks in a number of roles through until 1953 when at the young age of 32, he was appointed general manager of the company. In 1963 he became the inaugural chairman of the Australian Meat Exporters’ Federal Council (AMEFC), formed that year, and became the first AMEFC representative on the re-formed Australian Meat Board in 1964.

In 1962 he was offered a position on AMP’s Victorian Board of Advice as a non-executive director.

AMP had shown earlier interest in Australia’s agricultural sector as an area of investment. During the 1950s and early 1960s it undertook several large-scale land development projects in South Australia and NSW. These projects involved clearing and developing unproductive land, turning it into viable farming and grazing country, including correcting mineral deficiencies and sowing improved pastures. The land was then subdivided and sold off to individual owners.

In 1963, AMP’s chief investment officer asked Jim to do an assessment of a proposal which the company had received from Hooker Pastoral Group to invest in Northern Territory pastoral properties.

Jim advised the AMP not to proceed with the investment in the Hooker proposal, however. His main concerns were the lack of processing facilities, transport costs and generally difficult operating conditions which prevailed at the time in the NT. Additionally, some of the cattle performance projections used in the proposal appeared optimistic.

AMP took this advice, but at the same time said it was keen to invest in the beef cattle industry. It suggested to Jim that if Borthwicks wished to expand in the cattle business then it and AMP could establish a jointly-owned company with the turnoff being sold to Borthwicks, hence assisting its cattle supply security.

Jim was personally interested in this concept and put a proposal to the London head office of Borthwicks which agreed that it be investigated further. AMP initially wanted a 30 percent stake in the company, Borthwicks would take another 30 percent, and he undertook to find other investors to take the remainder.

It was proposed that part of Borthwicks’ capital contribution to the company would be two of its existing cattle station assets, being Stanbroke Station, southwest of Cloncurry, and Banchory on the Central Highlands near Clermont. At the suggestion of AMP’s deputy general manager, Keith Steel, it was decided to lodge the name, Stanbroke Pastoral Company.

AMP ended up taking 51pc of the company. The other shareholdings were settled at Borthwicks 30pc, Squatting Investments 16pc and Sidney Kidman & Co, 3pc.  Kidmans, a legendary Australian grazing family company, sold thousands of cattle to Borthwicks each year and a solid business connection had been established.

From incorporation through until mid-1967, the company was run from Borthwicks’ Melbourne office, as Jim was managing both companies during this period, leading up to his resignation from Borthwicks in 1967 to concentrate on the Stanbroke role full-time. 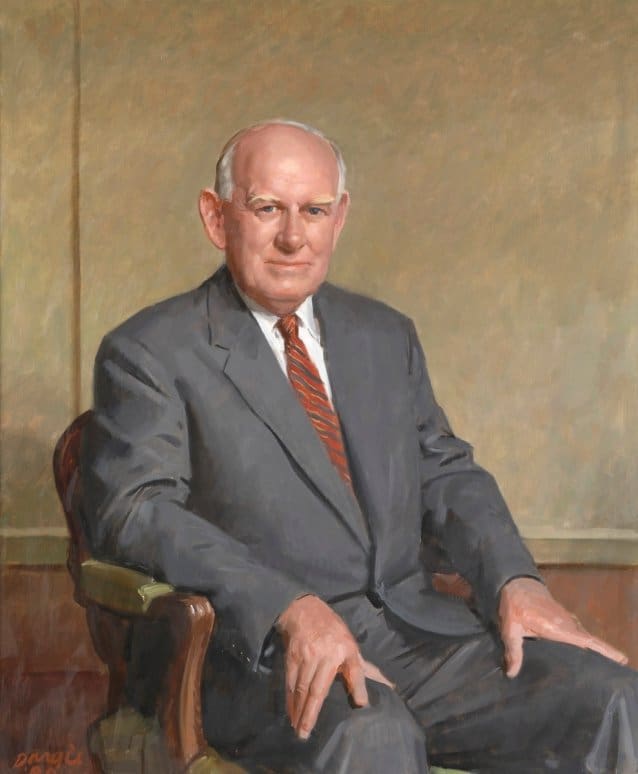 The Stanbroke business started operations on day-one with two properties – Stanbroke and Banchory – which were part of Borthwicks’ capital contribution to the new company.

From this narrow base, the plan was to acquire properties that would provide the company with a portfolio of strategically located cattle stations in various rainfall and land type regions.

Such a spread would provide a balance of breeding country in the lighter rainfall areas, and grass fattening capacity in the more reliable and heavier rainfall areas of central Queensland and the Channel country. The Channel country itself does not receive a high annual rainfall, but relies largely on beneficial flooding from upstream rainfall in the catchments of the larger western rivers.

This geographic strategy was also designed to provide flexibility in the movement of stock between properties in times of regional drought.

The main task was to identify properties suited to the company’s needs, and with a reputation for quality of country, along with a proven track record for cattle performance. Having done this, the issue became acquiring them at a commercially viable price. Some of the acquisitions were made from properties listed for sale, while others were the result of negotiations initiated by Stanbroke with the owners.

Jim Balderstone used a network of his meat industry contacts, along with some widely-experienced livestock agents like Gordon Reid, Jack Wyland and Tom Scanlon, all of Primaries, to identify the ‘targets’ and set about investigating possible acquisitions. A number of meat companies, stock agency businesses and pastoral family operations had their head offices in Melbourne. It was through these contacts that some of the property purchases were made.

In 1981, Jim retired as managing director of Stanbroke, replaced by Bill Norton, but he continued to guide the company’s fortunes through the turbulent 1980s Beef Slump era as chairman of the board. In 1983 the AMP Society assumed 100pc of the shares in the company.

He eventually retired as Stanbroke chairman in December 1993, bringing to a close a magnificent contribution to the northern Australian cattle industry that spanned 29 years. Including his years at Borthwicks, his influence on the industry extended beyond 50 years.

Mr Halliwell remembers Sir James as a person with a formidable reputation, and an unequalled degree of energy and devotion to his task.

“He commanded an unbelievable measure of respect and loyalty from his staff, at all levels, and gave it back in return,” Mr Halliwell said.

“He established the strong culture which became Stanbroke’s foundation for the next 40 years. He surrounded himself with managers and pastoral inspectors who were top cattlemen, practical, reliable and hard-working people.”

Beyond his deep contribution to the Australian meat and livestock industry, Jim Balderstone had a stellar busines career, becoming a prominent director of public companies, at different times chairing the boards of some of Australia’s largest companies, including  BHP, AMP and Chase AMP Bank. He also served as deputy chairman of Westpac, and sat as a director of ICI Australia and Woodside Petroleum.

He was knighted in 1983 for services to primary industry and commerce, and was made a Companion of the Order of Australia (AC) in 1992.