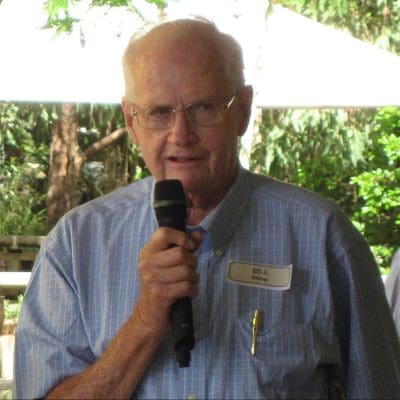 A successful and prominent beef producer and livestock agent, Mr Bishop was born and bred in the Gympie district, where he spent most of his life.

He is perhaps best remembered as a foundation Charolais cattle breeder in Australia, being one of three breeders who visited New Zealand in 1967 to import the first live Charolais cattle to Australia. Other partners in that venture included the late Trevor Cottee and Pat Nolan.

Mr Bishop’s Nuhrunda Charolais stud became a prominent source of seedstock in the formative years of Charolais breeding in Australia, and he later served as president of the Charolais Society of Australia.

He spent large parts of his career as a stock agent, firstly with Elders and later Dalgety, before launching his successful private stock and property agency Bewick, Bishop & Connolly (BCC) with partners Jim Connolly and Chilla Bewick in Gympie in the 1970s.

BCC and investors built and operated the local Woolooga Saleyards from 1973, initially designed to create a ‘trading hub’ for young cattle bred further north and sold to finishers in the Brisbane Valley and Mary Valley/Wide Bay regions. Woolooga remains an important selling centre for store cattle to this day.

Mr Bishop had an entrepreneurial spirit, and invested widely in businesses associated with the beef industry – frequently as a silent partner. At one point he had a shareholding in Violetvale Station in North Queensland, plus other cattle properties, and hotels in western parts of Queensland including Charleville.

He also took a keen interest in the Gympie Show, acting as president, life member and patron of the Gympie District Show Society. The main showgrounds building is named in his honour. He was also a prominent member of the Gympie Turf Club.

A service will be held at St Patrick’s Catholic Church, Church St Gympie next Wednesday, 19 January at 11am.