WHAT consumers and the broader public really think about cattle production and in particular its environmental performance has become one of the most discussed and debated industry issues over the past decade.

But, apart from traditional and social media coverage of key events and conflicts, to date there has been limited peer reviewed research on what drives public perceptions of the environmental performance of and trust in the Australian cattle industry.

Research led by The University of Queensland and published last week in the journal Environmental Research Letters has developed the first model of public attitudes towards the Australian cattle industry.

In a nutshell the research has found that public trust in the Australian cattle industry is high, but does not translate to support for a relaxed regulatory environment.

The study concludes that the industry should remain ‘open and transparent about its operations’ and ‘actively communicate with the general public about its values and goals in terms of shared sustainability objectives’.

Research involved a national online survey in 2018 of 2913 participants, selected to be representative of the Australian public by age, gender and geography, and ensuring both urban and regional attitudes were accounted for. 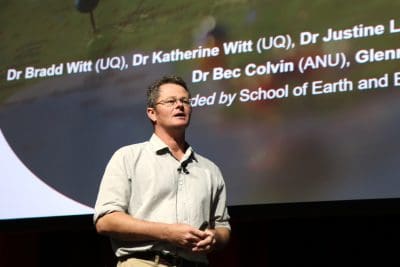 Lead resercher Dr Bradd Witt from the School of Earth and Environmental Science at The University of Queensland, speaking at the 2019 NTCA conference in Darwin. Dr Witt said he hopes the research assists constructive discussions within the industry, but also with those with a genuine interest in the sustainability of the industry.

The researchers set out with a hypothesis suggesting that public trust in the industry is important because if the industry is not perceived to be trustworthy, this will increase the public’s desire for an external party to monitor and regulate the industry’s behaviour, to ensure minimum standards are upheld.

However, the authors reported that through their research they discovered relationships between public attitudes toward the Australian cattle industry that departed from the expected model.

They found that their hypothesised path from trust to need for environmental regulation was not significant.

Instead it was revealed that high trust does not reduce public expectations for environmental regulation, aside from a small indirect effect.

Second, while attitudes toward the environmental performance of the industry are partially influenced by one’s environmental orientation, this orientation is particularly important in predicting the public’s perceived need for environmental regulation.

The paper says a prominent narrative endures in the Australian cattle industry that regulatory measures can be relaxed in high trust environments, and that regulations should be tightened when ‘something goes wrong’.

“However, simply because people trust the industry does not mean their expectations around being informed, involved and having a voice in how the industry operates are in any way diminished,” the authors write.

“Critically, the industry should remain open and transparent about their operations and actively engage with the general public to communicate their values and goals in terms of shared sustainability objectives.”

The paper said the research found that on average respondents trusted the industry and had favourable perceptions of its environmental performance.

This indicated that the Australian cattle industry had an opportunity to use environmental regulation and societal oversight to demonstrate good environmental performance and to engage with majority urban public on a diverse range of community expectations.

Among respondents self-reported knowledge of the cattle industry was variable but generally quite low, with 57pc saying they had limited or very limited knowledge.

Self-reported knowledge of environmental issues was much higher, with only 21pc of participants rating themselves as having limited or very limited knowledge.

The authors say the Australian cattle industry needs to demonstrate responsiveness to drivers of public attitudes – and responsiveness needs to go beyond improving industry practices to increasing engagement and communication between the industry, consumers, community and other stakeholders.

“Effective communication which underpins constructive industry-society relationships informs both industry practice and public understandings of the industry while insulating against reactive policy that may have perverse environmental outcomes, not to mention wider social, economic, and animal welfare outcomes.”

It also adds that most public and media interest in the environmental performance of the cattle industry occurs when ‘things going wrong’ which highlights public outrage and provides a skewed lens of community sentiment towards the industry.

“Our study provides representative and informative insights into public attitudes and their underlying drivers which can inform more effective policy and practice for shared sustainability outcomes.”

The research was funded by the School of Earth and Environmental Sciences, The University of Queensland and CSIRO’s Responsible Innovation Future Science Platform.