Trump’s victory against the odds: US, Australian industry reaction

REACTION is starting to flow out of the US and global red meat industries over the implications in Donald Trump’s unexpected victory in yesterday’s US Presidential election.

Swings in currency value around the world are one of the initial impacts, several commentators suggested.

The A$ started to climb against the US$ yesterday as investors were convinced that Hillary Clinton would win the election, only to be sent reeling as it was announced that Trump would be the next US president.

The value of the A$ plummeted as risk appetite waned, following Trump’s surprise win, as investors were worried about what effects a Trump presidency might have on global currency markets.

The A$/US$ rate has become increasingly unstable following yesterday’s shock result. Other currencies including the Euro and UKP have been similarly affected. The Mexican Peso also suffered a dramatic drop in value overnight, which is likely to impact Mexican importers’ ability to access US red meat and poultry products.

The A$ value did recover some of it losses following Trump’s victory speech last night, as traders were encouraged by his more ‘presidential’ tone, after reining-in his usual rhetoric.

However analysts are suggesting the exchange rate is likely to remain unstable over coming weeks, as investors try to anticipate the impact Trump will have on the US and global economy.

“Promises of heavy tariffs on imports, the commitment to do away with NAFTA, no TPP, and limits on free trade in order to stimulate domestic jobs may have a significant detrimental impact on the US meat industry”

“The reality is that a Trump presidency was for the most part discounted as unlikely by the financial markets and at least initially, we expect some panic trading to occur,” Steiner Consulting’s Daily Livestock Report said this morning.

Longer- term, however, no one really knew how the effects of the Trump result would play out.

“The only thing we have to go on are statements and positions taken by president-elect Trump during the election,” DLR said. Promises of heavy tariffs on imports, the erection of a physical barrier with one of our largest trading partners (Mexico), the commitment to do away with NAFTA, no TPP, limits on free trade in order to stimulate domestic jobs and other such commitments may have a significant detrimental impact on the meat industry,” Steiner said.

“Economists can argue about the overall macro effects of such policies and what the general impact may be on the economy, but for US livestock producers, the issue is much more parochial. And some livestock producers stand to lose more than others.” 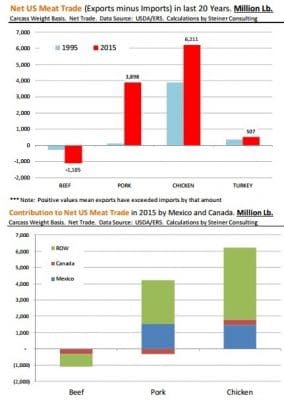 Steiner produced this graph, showing the evolution of net US meat trade in the last 20 years, since the NAFTA and GATT trade agreements went into effect. The biggest beneficiary during this process has been pork, largely because the opening of new markets, including Mexico, allowed low-cost US pork producers to better compete in world markets.

For the past 20 years, the US pork industry has expanded dramatically and most of the growth is due to booming pork exports. The supply of US chicken going to exports has also continued to increase since 1995 although exports always have been a significant driver for that industry.

For the US beef industry, the trade deficit that was in place 20 years ago has gotten larger.

“In 2015, we had a 1.1 billion pound trade deficit in beef, i.e. imports exceeded exports by that amount,” Steiner said.

“However, consider why that is the case. Over the last two decades the beef industry has become more efficient, we are getting more beef per animal in the herd and therefore the beef cow herd has declined.”

As the US beef industry generates more fat trimmings, more lean beef is needed to mix into an acceptable hamburger meat block. Exports accounted for 9.6pc of US beef production in 2015, compared to 7.3pc in 1995.

“The main reason why a more restrictive trade environment could be bad for US beef is because of ample supplies of competing proteins; lack of access to growing markets in Asia, and competitors establish trade pacts with current US export customers, undercutting US beef’s competitiveness,” Steiner said.

“It is certainly premature to discount the risk of trade wars centred on China and Mexico, and whether Trump will instruct his Treasury Secretary to label China a currency manipulator, as he has repeatedly threatened,” Mr Attrill said.

“And will a Trump presidency not at least embark on the path of stemming and reversing the flow of illegal immigration into America?  Both have the potential to sap growth and raise inflation, creating huge dilemmas for Fed policy and with that a key driver of global capital flows into and out of the US dollar. This will ultimately determine where the A$ goes,” he said.

“It’s more questions than answers at this stage. In the meantime markets are left to contemplate the meaningful prospect of a dramatic loosening in fiscal policy, both from the revenue and expenditure sides of the equation, ostensibly more readily achievable in an environment where the Republicans have achieved a clean sweep in controlling all branches of the Legislature and the Executive.  To what extent the Tea Party prove able to exercise a blocking minority on policies which have the effect of sharply raising US debt levels, remains to be seen.”

Any move away from more open markets and towards protectionism can only have a negative impact on Australian farmers, National Farmers Federation president Brent Finlay said yesterday afternoon after Donald Trump’s election victory.

“With the US Presidential election now called for Donald Trump, any move by the new administration to implement protectionist measures is of concern to Australian farmers,” Mr Finlay said.

“Australia exports more than 70pc of what we produce, so any trade damaging measures such as increases in tariffs, reductions in import quotas or increases in US domestic subsidies will hurt Australian farmers and other exporting nations. The US is a major partner in trade and investment and we trust that the strength of our relationship will place us in good stead going forward,” he said.

“Australia must not give up the substantial gains that come from trade and opening up new markets. More trade liberalisation of markets means more growth, innovation and investment and that is consistent with the future of agriculture.

“We do however understand that voting trends around the world suggest that governments must do more to better manage the impacts of trade liberalisation and technological transformation, particularly where people are challenged by or do not fairly share in the outcomes of that change.

With a TPP ratification increasingly unlikely, NFF’s attention would now shift to other negotiations such as the Regional Comprehensive Economic Partnership (RCEP) and the next round of WTO negotiations to salvage any gains forgone.

“The NFF is this week chairing a meeting of the Cairns Group Farm Leaders in Geneva where the focus is squarely on building momentum for substantial improvements in market access,” Mr Finlay said.

“In this forum and others the NFF will continue to advocate long and loud for further trade reform and will assess with our members and in discussion with the government where the outcome of the US election leaves our long term trade objectives.”