IF you work in the livestock industry and have not yet been tested for Q Fever, it might pay to heed a word of truly heartfelt advice from WA stud cattle breeders and industry leaders Kathy and David Lovelock. 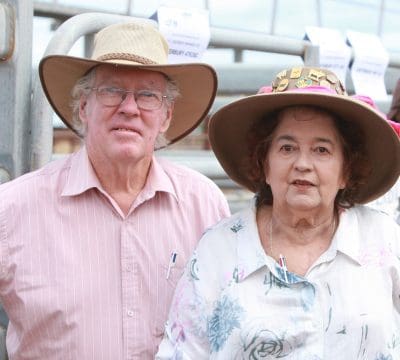 These days Kathy is known as ‘the Brahman lady’, and not just because both she and David are passionate Brahman producers.

It is also because they both now have heart valves made from bovine tissue – a direct consequence of their 25 year battles with Q Fever.

Q fever is an infectious disease that can be spread to humans by sheep, goats and cattle, and is caused by inhaling dust particles contaminated by infected animals.

Kathy has a simple message for anyone working in the livestock sector – testing and vaccination is a far simpler and less costly path to take than risking an infection from the disease.

Kathy and David are the epitome of a non-stop, hard working farming couple.

They have developed a successful stud and commercial Brahman enterprise selling 100 bulls a year into the Pilbara and Kimberley and also exporting bulls into several South East Asian nations.

Now close to retirement, for many years they also ran a sheep operation that included a sheepskin and leather products manufacturing and retailing business operated from their farm, which sits on a popular tourist trail near New Norcia north of Perth.

Kathy and David have also been active and long-serving industry representatives at breed, State and National level.

Most recently David served on the Board of Cattle Council of Australia for 8 years until 2019. Kathy has also served on CCA committees and is the current president of the United Beef Breeders of WA, a position David has also held in the past. Both have also been leaders at various times of the Australian Brahman Breeders Association WA branch. 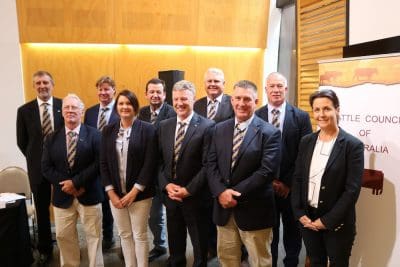 David Lovelock (second from left) pictured with the Cattle Council of Australia board at the council’s 2018 AGM in Canberra.

Kathy and David believe they contracted Q Fever while visiting sheep and goat breeding sheds on Government research sites in Sabah, a Malaysian State on the island of Borneo, in 1995.

By the time they returned to Australia seven days later Kathy was “as sick as a dog”, she said, and was sweating profusely, had turned grey and was “completely immobilised”.

“I couldn’t lift my head off the bed for months,” she recalled.

David did not experience the same degree of symptoms as Kathy, but soon found that his immune system had become badly weakened, and started catching “every bug going around”.

While Kathy suffered repeated debilitating recurrences of lethargy and illness, the cause remained a mystery for 12 years until 2007, when doctors in WA ran a pilot program for Q Fever.

Blood and skin tests confirmed Kathy and David were both infected with Q Fever.

Q fever symptoms can be treated with antibiotics, however Kathy’s situation was made worse by the fact she was allergic to many things, including antibiotics.

As a result she has had to endure 25 years of regularly returning onsets of wearying fatigue and sickness without the aid of suitable medicines that would normally be used to treat and relieve symptoms.

Over time, the disease eventually led to blockages forming in Kathy and David’s heart valves.

In 2015 they both underwent open heart surgery three months apart.

Kathy’s allergies led to an unusual but ironically fitting outcome.

However, Kathy is also allergic to pigs.

Fortuitously their surgeon was able to source replacement aortic valves made in California using bovine tissue which originated from cattle produced in Queensland.

The Australian Country Choice processing plant in Brisbane is an intenationally recognised specialist provider of bovine pericardium tissue for the creation of artificial heart valves.

While the Lovelocks cannot be sure, they like to think that the fact their bovine heart valves originated from Queensland means there is a more than reasonable chance the heart tissue that saved their lives came from Brahman cattle.

She added that while David could have had a pig valve for his operation, as he is not allergic to pigs, in his considered opinion “the cow tissue one was superior to the pig valves.”

While the surgeries were a success, fatigue caused by Q Fever remains a relentless problem for Kathy.

The changes it has forced upon her daily life mean she can truly attest to the fact their Brahman cattle are “as quiet as it is possible to get”.

“In the cattle yards we have a centre pen, and when we’re sorting bulls out or sorting heifers out I sit down there against the rails and I have people with legs that work and tell them what to do with cattle as they come through,” she said.

“We are fine because we have got quiet cattle.

“The worst thing is when the cows get too close to me at the back end and I have to push them out of the way because I don’t want to be accidently sprayed on.”

Why both tests for Q Fever are ‘essential’

Kathy said the simple message for anyone who comes into contact with livestock is to get tested by their doctor, and, if they don’t have the disease, to get vaccinated, which has been proven to be effective.

But importantly, she stresses it is critical to have both tests – the blood test and the skin test – before receiving a vaccination.

For now, the Lovelocks are in the process of retiring, but their hearts will remain firmly in the cattle industry.

Help with research: Charles Sturt University researcher Dr Tabita Tan is inviting people who have had Q Fever to contact her to help with her research about the illness and patient experiences in achieving a diagnosis – for more details click here.