When a truck rolls over, the roll usually starts at the back trailer, not at the front of the vehicle as many tend to believe. 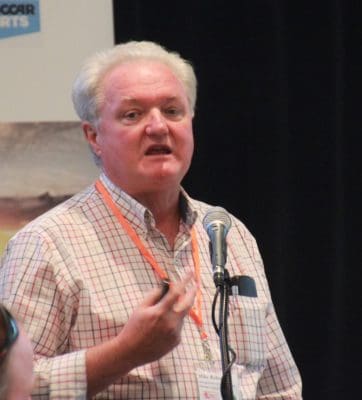 It comes down to basic physics, as engineer and truck crash investigator Mike Robertson explained to the Australian Livestock and Rural Transporters Association conference in Toowoomba last week.

The video below shows what happens when a truck in a test situation takes a corner slightly too fast.

Just prior to this video footage, the truck completed the same manoeuvre three kilometres per hour slower, and handled the turn without incident.

The back wheels lift, the rear of the trailer twists up, the centre of gravity shifts to the outside edge of the tyres, and it is now past the point of no return. From this point, the truck is guaranteed to roll, regardless of what action the driver takes.

But critically, as the video shows, even when the back wheels have lifted well off the ground, the driver has not yet responded. Note that the wheels of the prime mover are still on the ground well after the back wheels have passed the point of no return. It takes more than a second for the driver to feel the catastrophe that is unfolding behind him and apply the brakes – by which time it is all too late.

Does technology have a solution, such as a clever way to detect when a truck is close to a rollover and to apply brakes automatically, before the driver is even aware of the impending disaster?

The answer is yes, in the form of Electronic Braking Systems (EBS) with Electronic Rollover Protection or Electronic Stability Control kits. The technology uses sensors on trailer wheels and suspension to sense when a trailer is approaching a critical rollover situation and applies brakes before the driver knows action is needed.

The introduction of electronic stability control in Germany had dropped the number of truck rollovers there by 80 percent, Mike Robertson told the audience.

The Federal Government is currently exploring the possibility of making this technology a mandatory requirement on all new trailers in Australia.

The Department of Infrastructure & Regional Development is preparing a Regulation Impact Statement, which is due for release in the middle of this year. The conference was told that if a new Australian Design Rule is approved by Government, the technology could become mandatory in Australia within 18-24 months time.

While the concept sounds great in theory for trucks travelling on the modern highway networks of the Eastern seaboard, how will it work in remote Australia on rough unsealed roads and long-distances from workshops?

It is an issue that is clearly dividing opinion in the livestock transport industry.

Some transport companies indicated at the ALRTA conference that they are already using and benefitting from this technology, while others said they had tried it and discontinued its use because of problems.

Evan McDonald from BPW Transpec said the technology is currently being used successfully on vehicles throughout rural and remote Australia including quad fuel tankers operating in the Tanami Desert.

Northern NSW based livestock transporter Robert Cavanagh, Stockmaster, told the conference he has made Electronic Stability Control a standard fixture on his trailers for the past five years.

What sold him on the technology was the educational value for drivers, he said.

“That is what sold me on EBS braking.”

Roma-based transporter David Scott said he has used the technology on three trailers operating in remote areas such as the Moomba and Jackson oil fields.

He has since disconnected the technology on two of them due to excessive tyre wear.

“A set of trailer tyres runs for around 50,000km in that environment out there if you are lucky,” he explained.

“The two we disconnected when we were running the EBS were coming down to between 24,000 and 27,000 kilometres.

“When we disconnected the system we ran straight back up again.”

Mark Johnson, director of sales and marketing for Haulmark Trailers, said the technology could be a great advancement where used appropriately.

However, he expressed concern about its application for operators in remote and off-road type applications.

“We have fitted EBS over the years, in general terms it works okay, but we have found though there can be more accelerated service requirements if you are in remote areas.

“In the livestock game we have clients where 95pc of their life is on dirt, and they could be away from the workshop 5-6 weeks at a time

“There is a whole maintenance question mark over that sort of operation.”

“I am ultimately concerned that if it is a blanket approach, you are going to get it whether you like it or not, and there is a cost involved.”

A lot of livestock trailers operating in harsh, remote areas used spring suspensions, Mr Johnson said, which was more difficult to calibrate for the electronic braking technology than air-bag suspensions.

“We run four different spring deflections depending on where you are going, so it becomes much more difficult to get the system set correctly and to maintain it at that level,” he said.

The Australian Transport Association has taken the position that electronic stability control should be made mandatory across the board, but with appropriate exemptions.

ATA senior engineering advisor Chris Loose said he believed the technology worked in an off-road environment, but acknowledged that it added costs and could present maintenance difficulties in the event of a failure a long way from base.

He urged livestock transporters to actively participate in industry efforts to qualify what an appropriate exemption could be and to build a case for its inclusion.

Stephen Hoy from the Department of Infrastructure & Regional Development said an exemption would have to relate specifically to the construction of the vehicle, not to the geographic area.

“You can’t say where it is going to be used, that is not part of the ADR process, it would have to be something that it is a stock crate and it has certain characteristics such as springs or whatever

“So that is something to bear in mind when you come to us, it has to run to how the vehicle is constructed.”