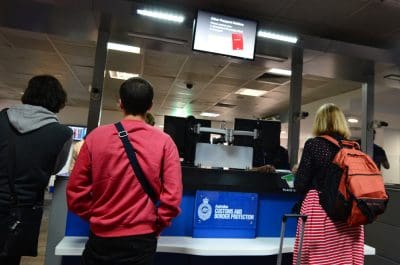 An international traveller has been fined $2,664 and refused entry to Australia after attempting to bring six kilograms of meat products into the country, in a serious breach of Australia’s biosecurity laws.

The traveller failed to declare 3.1 kilograms of duck, 1.4 kilograms of beef rendang, over 500 grams of frozen beef and nearly 900 grams of chicken concealed in his luggage.

The traveller answered ‘no’ on their Incoming Passenger Card when asked whether they were bringing any meat, poultry, fish, seafood, eggs, dairy, fruit or vegetables into Australia.

“This is why legislation is in place to cancel the visa of any traveller who commits a significant biosecurity breach or repeatedly contravenes biosecurity laws,” Minister O’Neil said.

“These types of products are a major risk for bringing food and mouth disease into Australia, and that’s why we make no apologies for our strict biosecurity measures,” Minister Watt said.

“The traveller contravened subsection 533(1) of the Biosecurity Act 2015 by knowingly providing a false or misleading document (the Incoming Passenger Card) to a biosecurity officer on arrival to Australia.

“This is a very serious breach and this traveller has been hit with the toughest penalties at our disposal.

“The actions of Biosecurity Officers and ABF at the border have once again protected the Australian community and our agricultural sector from harmful biosecurity risks that have the potential to do enormous damage.

“All travellers should openly and honestly declare food items on arrival in Australia so that biosecurity officers can inspect the items and assess the biosecurity risk.

“If the goods are permitted into Australia, they will be returned to the traveller. However, if they don’t declare risk items, they will be caught and penalised.”

Travellers who have their visa cancelled are removed from Australia on the earliest available flight, and can face an exclusion period of three years before they are able to reapply for a visa.