Click on video to lean how the Noble Gas Facility operates

IT IS now possible to date groundwater samples from one million years to just a few decades old, under new tools now available to Australian scientists. 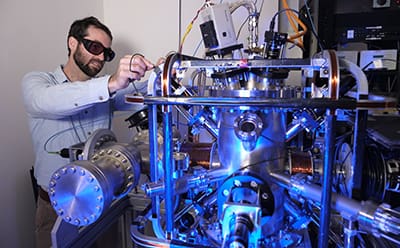 The unique new Atom Trap Trace Analysis (ATTA) facility at the University of Adelaide uses advanced laser physics to count individual atoms of the noble gases, such as Argon and Krypton, that are naturally found in groundwater and ice cores.

Measuring the ultra-low concentrations of these radioactive noble gases allows researchers to understand the age, origin and interconnectivity of the groundwater and how it has moved underground through space and time.

A collaboration between CSIRO and the University of Adelaide, the facility is the first of its kind in the Southern Hemisphere.

Combined with the CSIRO’s complementary Noble Gas Facility at the Waite campus in Adelaide, gives Australia one of the most comprehensive noble gas analysis capabilities in the world.

“Australia relies on its groundwater for 30% of its water supply for human consumption, stock watering, irrigation and mining,” says Professor Andre Luiten, Director of the University’s Institute for Photonics and Advanced Sensing which houses the ATTA facility.

“With climate change and periods of prolonged drought, surface water is becoming increasingly more unreliable and the use of groundwater is rising. We need to make sure it’s sustainable.”

“Because noble gases don’t easily react chemically, they are the gold standard for environmental tracers to track groundwater movements. Before this new facility, researchers wanting to measure these ultra-low concentrations of noble gases had to rely on a very small number of overseas laboratories which can’t meet demand for their services.”

ATTA’s analytic capability will also allow researchers to look further into the past of Antarctica’s climate, building understanding of global environmental change.

CSIRO Senior Principal Research Scientist Dr Dirk Mallants says the new ATTA facility will enable researchers to determine how old groundwater is from decades and centuries up to one million years.

“It will provide Australian researchers, government and industry with unique capability of collaboration on national water challenges.”

Energy, mining and resources is a key industry engagement priority for the University of Adelaide and environmental sustainability is a research focus.

The CSIRO and the University of Adelaide in 2017 announced a new agreement to work together to tackle some of the big issues facing Australia and the region.

The two organisations agreed to build collaborations to advance research in key areas of mutual strength, with significant potential benefit to the Australian economy, society and environment.