Ryan Olive’s feedlot at Raglan Station, situated about one hour’s drive from Rockhampton, is usually home to cattle being fed for export and domestic markets, but on Friday it also hosted some of the nation’s most senior political leaders and an attendant media entourage as well. Mr Olive said he appreciated the opportunity to meet personally with the senior Government leaders, and discussed with them the severity and impact if a disease like FMD or LSD breached Australian shores.

“It shows they are taking an active interest in supporting agriculture and are engaging with people on the major issues,” he said.

“Personally I don’t know if anyone knows the correct combination of steps that need to be taken, but they are prepared to listen, and they are actively looking to do everything they can, like increasing border security and vaccine support in Indonesia.”

‘Every step a good step, but there will always be another step’ During a press conference at Raglan Station, AgForce cattle president Will Wilson said every step taken to protect what is a very valuable industry is a good step, but “it is never going to be the last step and we need to continue to evolve”.

“As producers now we’re at the cutting edge of what we can do to protect ourselves and the community and we appreciate everything the community’s doing, the people that are travelling, as well as the people in Australia that are now aware of what the biosecurity threat is.”

In addition to strengthening Australia’s own biosecurity, he said it was also very important Australia do all it can to help Indonesians control their outbreaks too.

“I think that it’s important that we recognise that in these conversations, because they’re the ones that have the threat at the moment, and we need to really care for them, and I applaud the efforts that we’re making in country in Indonesia, particularly at the moment.

“…Their learnings are going to help us be more prepared here. So, like I said to both the Minister and the Prime Minister, every step that we take is a good step. But there will always be another step that we need to take.”

Asked by a journalist what the Federal Government saw as next steps, Minister Watt said the Government has so far implemented a three-pronged approach focusing on supporting Indonesia and other neighbouring countries, strengthening Australia’s biosecurity at its borders, airports and mail centres, and establishing a national preparedness taskforce.

“One of the other things that we’re looking at as well is traceability, and we were just having a good chat with both Will and Ryan about the importance of that,” Minister Watt said. Having recently convened the first meeting of State and Territory agriculture ministers for nine months, he said a key development was an agreement on a national biosecurity strategy, which was launched last week.

But secondly, for the first time, the meeting also resulted in every Agriculture Minister from around the country signing up to doing more on traceability.

“The reason that matters is that if you’ve got those tags in those animals here, is if you were to have an outbreak of a disease it enables you to track down where animals have been and monitor their movements so you can get an outbreak under control much more quickly.

“Having that kind of national traceability scheme for all cloven-hoofed animals, including sheep, is a critical step for biosecurity.

“And we are closer than we’ve ever been because of the co-operative approach that our government has taken with industry and with states and territories. So that’s just one example. But I’m sure there’ll be more to come.”

After recently announcing more vaccines for Indonesia, Minister Watt added that he will be returning to Indonesia as part of the Agriculture Minister’s G20 conference next month, adding that “there will be further assistance, I’m sure, that will come out of that”.

Amid a national workforce shortage, Mr Wilson said the importance of not allowing jobs in agriculture to be overwhelmed by demand from the resources and expanding renewable energy sectors, and the need for greater recognition of specific trades and career pathways that can be gained in agriculture, was also discussed ahead of next month’s National Jobs Summit in Canberra. 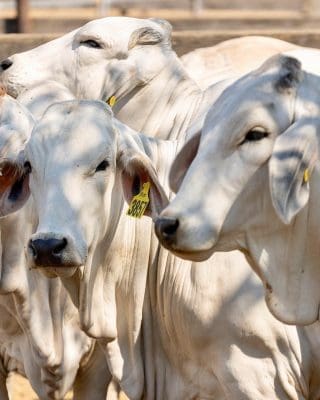 Prime Minister Anthony Albanese told the media conference at Raglan that the Federal Government has responded to the presence of FMD in Indonesia with the “the most comprehensive plan that has ever taken place in Australia to ensure that we’re protecting our industry”.

“This is an industry that produces billions of dollars of benefit for Australia. If FMD was to gain hold in Australia it potentially would provide up to $80 billion of damage,” he said.

He said the Government was working in a cooperative way with industry to make sure that the industry is not just protected, but that it grows into the future.

No scale-back of biosecurity measures any time soon

Minister Watt said it was unlikely that recently ramped-up biosecurity measures including foot mats would be scaled back anytime soon.

“Realistically, with the best will in the world, Indonesia is going to have this outbreak for some time to come and we’ve been very clear that we stand ready to assist them in any way that we can.

“But I’m in constant contact with industry and the department and our biosecurity experts about what other measures can be taken.

“One of the really pleasing things that’s happened in the last week is that we arranged for a group of industry leaders from the livestock industry to go and see it for themselves, what’s happening at airports.

“And you might have seen they were incredibly complimentary about the measures that we have in place.

“There’s actually more than 20 touch points in a travel pattern, where someone has some kind of contact about the risk of Foot and Mouth Disease and what they can do.

“It’s starting with when people booked their tickets and they’re getting social media and other things to alert them to the risk. We’ve now got – when you’re travelling to a new district and Telstra tells you you’re in a new mobile zone and here’s your plan – we’re doing that with foot and mouth disease as well.

“It’s called geofencing. It can pick up when people are in a particular area and give them the information that they need. So we’re doing all sorts of things that are very innovative, and we’ll keep doing more.”