AS fierce winds fan huge fire fronts across tinder dry regions of northern NSW and southern and central Queensland, cattle producers who have endured a horrendous fire season further north are watching on with a strong sense of empathy for their southern counterparts. 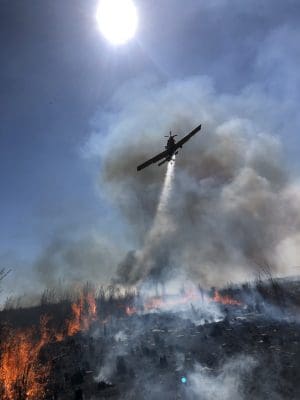 David Connolly and his own team at Tipperarary and Litchfield in the Northern Territory have had an exhausting four months battling blazes in a fire season that has been unlike anything they have experienced before.

Mr Connolly told Beef Central this morning he is feeling for affected landholders and residents currently dealing with fires in NSW and Qld.

“Looking at the fire coverage I know how people will be feeling down there,” he said.

“It is soul destroying.

“They will be physically and emotionally exhausted, drained, it takes a lot out of you.

“These fires are dangerous, they’re hot and their fast moving, and they physically exhaust you to fight them, but also mentally drain you because it is such a responsibility.”

He said producers across the Top End have had their worst fire season in memory on the back of failed wet season followed by unusually hot and dry winds through August, September and October.

Must say, after a straight 72 hours of fighting fire, its starting to grow a little old. #shattered Now for a hot shower and a camp. Storms forecast. Bloody hope so. ⁦@bouta_nt⁩ ⁦@AdamCoffeyNT⁩ ⁦@troysetter⁩ ⁦@BruceCreek⁩ ⁦@osagecattle⁩ pic.twitter.com/AD2JZYBbXW

The parched conditions have led to fires starting for no apparent reason, in areas of bush country where no human intervention has been likely or even possible.

Fires have also been jumping unusually long distances, with new fronts suddenly opening up kilometres away on the back of strong winds, making this year’s fires extremely difficult to fight. 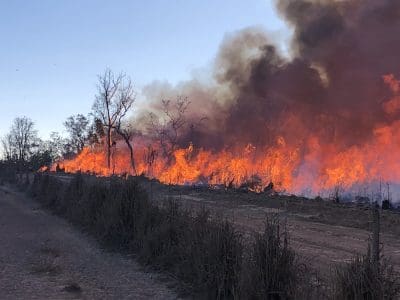 “Where we have been early burning to look after the country we have had another wildfire come through and burn across that old burned country again, and then the same thing again.

“The first fire goes through in a mosaic pattern, it doesn’t burn everything because it is a cool burn and there is a little bit of ground cover left.

“Trees will drop leaves through the year, a second fire will come through and burn really hot on a hot wind and as soon as it has that wind behind it doesn’t seem to need a lot of fuel, it will just roar across the country, and then trees will drop leaves again and then we will get a third fire.

“And those second and third fires, they will creep along for a couple of kilometres and then come to a paddock where there is a heap of feed you have been saving for cattle, and suddenly you have a roaring great inferno again.”

Tipperary alone has lost 200 square kilometres of grass in recent months that was being saved for this late period of the dry season.

As a result they are now drafting heifers for sale that they would rather not be selling.

“We were holding them thinking we are at the right end of the year for some rain.”

It has been a similar plight for many stations across northern Australia in 2019, as the below map from the Northern Australia Fire Information website demonstrates (the coloured areas document scars where fires have occurred at different months throughout this year, with red and blue areas showing fires recorded in the past seven days)

Fighting fires demands all hands on deck with staff rostered on day and night, consuming weeks of time that prevent other important jobs around the station from being done.

Mr Connolly said all staff are given extensive fire management training on the stations in conjunction with local fire authorities. He said the priority is “to look after people first, animals second, infrastructure third and then getting the fires out”.

YULGILBAR FIRE FIGHT: Rob and Lorraine Sinnamon and their team at Yulgilbar Station in northern NSW have been fighting bushfires for over a week and this morning have appealed for urgent agistment or lease opportunities for up to 3000 displaced stock – click on this Facebook post for more information and contact details.

“Mr Connolly said the past year has been the worst fire season he has experienced.

“We have had some big fires here, but we have always been able to manage them and bring them under control very quickly,” he said.

“We back burn aggressively so if a fire takes off we go and give it ground, but then form a line and back burn and get it out.

“This year they just didn’t go out, they wouldn’t go out.

“We had instances where we thought we had a fire out and 16 days later, it started burning again.”

Mr Connolly said after some recent rain he is confident they have finally got the fires under control but added: “I’m always really quick to say you only think you’ve got them out”.