Tom Bull at ICMJ: Lessons from a livestock leader Tom Bull from Lambpro hosting a tour of 150 agricultural students from across Australia and Japan, the United States and Pakistan at his Holbrook property last week. Picture: Keigo Kuchida

TOM Bull didn’t have a large farming operation to return home to when he graduated from Orange Ag College.

Success would require finding his own way.

20 years later, it seems safe to say he found it.

The business he started with borrowed funds to buy his first 36 hectare (90 acre) block has grown to become one of the most influential seedstock enterprises in the Australian prime lamb industry. 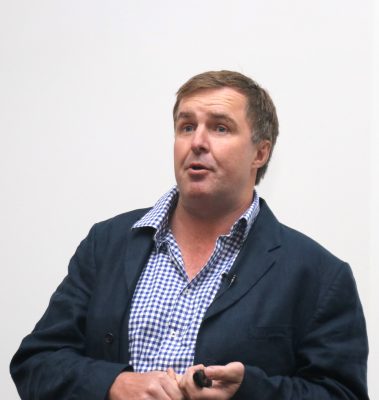 From what is now a 1820ha (4500ac) aggregation at Holbrook in southern NSW, the LambPro operation he has developed with wife Phoebe breeds specialised, market-tailored genetics for a large network of sheep producing clients in southern Australia.

LambPro rams will this year sire more than 800,000 lambs, a number expected to grow above one million annually within the next few years.

In addition to the terminal and maternal ram lines LambPro produces, which are focused specifically on increasing kilograms per hectare and dollars per kilogram, LambPro is also pioneering the development of a specific line of sheep with characteristically high intramuscular fat traits (marbling). In the process it is moving quickly to fill a gap in the domestic market for consistently very high eating quality (MSA five star) prime lamb (more below).

Last week at the Intercollegiate Meat Judging annual conference in Wagga Wagga Mr Bull shared the story of his journey with 150 agricultural students from around Australia, as he has done at the past 10 ICMJ conferences.

That means some thousands of young industry professionals have now had the benefit of hearing directly some of the key market-proven messages that have underpinned Mr Bull’s growth story from self-starter to industry leader.

Tom was in his early 20s when he graduated from Orange campus. Unlike a lot of his mates, he didn’t have a farm to go back to.

“The dilemma for me was what do I do and where do I take myself,” he said.

“As a young graduate I had to look and say ‘well what is my career path?’

“I had a view that what the lamb industry lacked was people that understood every section of the supply chain.

“So I made the point of not trying to get a job on farm, and to try and get a job that was in a different area. I didn’t want to do something I knew, so I went into meat processing.”

He took a job at the Harden abattoir. A firm policy stood that no staff member could progress to management until they could complete every cut in the boning room. He worked his way up.

Next followed a job with MLA, overseeing a research project focused on the meat yield measurement technology ViaScan, before taking on the role of marketing manager for ViaScan across Australia and New Zealand.

The insights these early roles provided into the meat and consumer end of the lamb industry were clearly a key learning experience that helped to shape the LambPro business that was to come.

Start with the consumer and work back

Mr Bull is not a fan of the “Thank a Farmer for your next meal” style of thinking.

“I hate the sentiment that farmers are owed a living,” he said.

“If we want to survive, we have to produce what consumers want.

“We can’t produce something and then all of a sudden expect the world is going to look after us, so we’ve always taken that consumer-first attitude.”

‘Start with the consumer and work back’, was a recurring theme of his address.

The Australian lamb industry has experienced transformational change in the past 30 years.

Domestic lamb consumption per capita has fallen from 20kg per person down to 9.5kg per person, but new markets have emerged and Australia now exports as much lamb of the lamb it produces as it consumes at home.

In 1998 lambs were topping the market at $35 per head. Now the top lambs lambs are exceeding  $350 per head. Over that period grain prices have not risen as significantly, which has improved the cost-effectiveness of production.

Repeating what previous generations have done does not prepare you for change.

“We were very anti-tradition – the whole idea of studmaster and jackaroo and show ring. I took an entirely different approach,” Mr Bull said.

“I forgot tradition and focused on profitability in the markets.”

Rather than producing a specific breed of sheep and trying to convince the world to eat that breed of lamb, Mr Bull’s approach was to work out what the market wanted and then breed sheep that fulfilled that criteria.

“What that actually meant is that a lot of our sheep are hybrids,” he said. “Our main breed is a maternal composite, but it has seven breeds in it.”

Results endorsed the strategy. Within five years of breeding their first composite rams LambPro progeny had broken every sales record in Australia. LambPro’s maternal sale still holds the record for the highest grossing ram sale in the country.

“What actually happened is we attracted a demographic who were interested in one thing, and that was returns per hectare.

“Young corporates, young family farmers, large corporates, most of them are interested not in whether they have got the best Merino flock or Corriedale flock, most of them want to make 5pc or 7pc or 10pc return on capital.

“We look at what animal is going to make us more money and how do we define that.”

Lamb is becoming a premium product for entertaining

A key reason behind the declining consumption per capita of lamb in Australia is its expensive retail price. At $10/kg carcase weight, which prices an individual lamb roast for a family of five or six at around $60 at retail, it was out of reach for many families.

“Lamb is transforming towards being an entertaining product, and the target market for lamb are young professionals worldwide,” Mr Bull said.

Portion sizes are also decreasing, to a standard of between 100-150 grams per serve.

“If you have got a dietician or a doctor or some psycho personal trainer chasing you around saying you can only eat 100 grams of meat in a meal, you want to make sure it is bloody good.

“So that is modern eating – smaller portion sizes, and willing to pay more per kilo.”

Lamb’s dilemma – and a marbling breakthrough

Mr Bull said lamb’s dilemma was that there is still no brand available in Australia than can offer an MSA Five Star eating experience.

With the help of meat scientist Dr Peter McGilchrist from the University of New England and Thomas Foods International, the Bulls began testing a lot of sheep for eating quality. 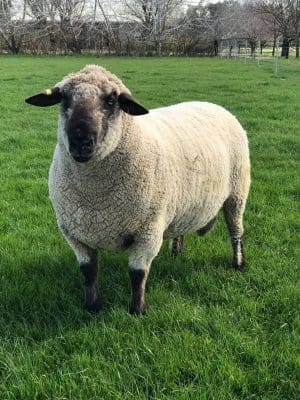 They found a relatively rare breed of sheep called the Hampshire Down which produces consistently higher marbling.

“The MLA put one (Hampshire Down) in their information nucleus and that one ram came in the top 10 out of 850 Dorsets, White Suffolks and all the mainstream breeds.

“No one ever asked the question – was he the best, worst or average of the breed?

“So we went and started testing other Hampshire Downs and out of that we found there were probably 30-40pc of the breed that actually had a higher propensity to marble.

“We purchased several studs which we believe had outlier marbling genetics. We are now self sufficient.

“We are on a journey with our clients to position them for a segmented market.

“So we see that as an opportunity really to brand a product based on its ability to grade five star MSA long term.

“And the upside for our clients is we will have critical mass, you know we can do that with hundreds of thousands of lambs.”

If you want to be the best, learn from the best

Mr Bull’s advice to young people making a start in the livestock sector is to think about their career and where they would like to end up, and then work out the skills they will need to achieve that goal.

“Probably the biggest advice I could tell you is get a job based on what you’ll get out of it from skills, forget about money.

“If you want to be the best you have got to learn from the best.

“And if that job only pays 20 percent, do it, because that will set you up for life.

“Take the long road, look at which job is going to give you the best skill set to really position yourself, get in those companies, ask questions and meet people.

“Your early 20s is a good time to go wherever you need to go to get the experience.

“Get in those companies and if they pay $10 an hour, thank them, and sit there and learn.”