The hunt for a wet October: drought hotspots needing rain

WHILE record crops and a surplus of grass in New South Wales have been the tale of 2021, water is running out and herd numbers are on the decline in large parts of Queensland. 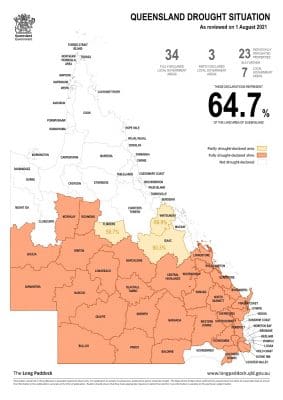 Almost 65 percent of the state is still officially drought declared, with the North Burnett district of central Queensland being typical of those running low on water.

Monto-based livestock agent and saleyard owner Brad McInally said most weaners produced in the North Burnett this year had already been sold.

“Generally, people have been offloading cull cows and cows and calves and cattle like that,” Mr McInally said.

“Feeder cattle have just been worth so much money and if cattle are feedlot entry weight they’re selling because there’s not enough grass to finish them.

“We’ve had a lot of buyer support from people further south around Taroom and Wandoan who have had rain and planted oats crops. There’s also been buyers coming up from the South Burnett.”

But Mr McInally said some areas had received less than 100mm, a fraction of the annual average 600mm. He said the past three wet seasons had also failed to generate much run-off.

“Some of the stock bores have dried up and surface water is certainly an issue,” he said

“I was chatting to a local truck driver and he was telling me he has been carting hay to Monto from other areas, which is very rare.”

Mr McInally said rainfall in the past two months contrasted with the Bureau of Meteorology’s forecast wet spring.

“It’s always dry at this time of year but usually there is a little bit of winter rain to gives some herbage,” he said.

“There’s been nothing this year except 20mm about three months ago.” 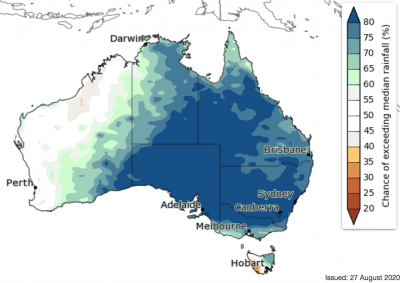 The BoM’s latest rainfall outlook for September through to November.

In the north and west of Queensland, the overwhelming analysis of the past wet season has been patchy and inconsistent.

Longreach-based livestock agent Boyd Curran said with two months left of spring, there was still plenty of anticipation for rain. 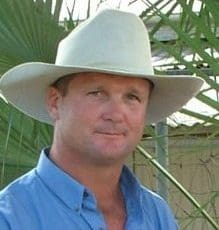 “We are really looking forward to having a full wet season where there’s early storms and it continues to rain through the summer months,” Mr Curran said.

“There’s a lot of areas that are hoping in earnest that the weather bureau is right and we can take advantage of these cattle prices.”

Mr Curran said large numbers of cattle from the area had been sold due to the dry and a lot of producers were sending animals hundreds of kilometres away for agistment.

“This year’s been pretty good for agistment, a lot of our clients have sent cattle down south into New South Wales.”

“There have been properties in western Queensland that have been able to provide agistment to local people, but generally speaking you have to look down south.”