The culture of cattle ranching in the Brazilian Amazon 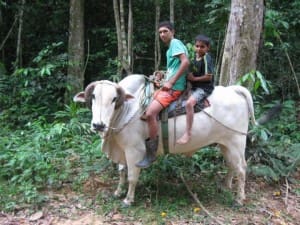 Rubber tapper children ride their steer home from school in the Brazilian state of Acre.

With more and more rainforest giving way to pasture and grazing land every year, the practice of cattle ranching in the Amazon has serious implications on a global scale. At the same time, however, it provides a degree of socioeconomic flexibility for Amazonian smallholders who simply can’t survive on what the forest or agriculture provide.

In a paper published in the current issue of the journal Human Organization, UC Santa Barbara anthropologist Jeffrey Hoelle takes a look at the rise of cattle ranching in the Brazilian state of Acre and the processes that brought it to one of the greenest corners of western Amazonia.

According to Hoelle, an assistant professor of anthropology, the Amazonian research on cattle usually falls into one of two camps: documentation of the environmental consequences of cattle raising — the leading driver of Amazonian deforestation — or analysis of the ways that policies and markets interact to make cattle and pasture more profitable than the standing forest. His article aims to expand the study of Amazonian cattle raising to include “cattle culture,” the positive cultural constructions associated with a cattle-raising lifestyle that contribute to its appeal over other ways of using the land.

In Acre, Hoelle writes, “the rubber tapper movement protested the arrival of cattle ranching in the 1980s, capturing worldwide attention with a message of sustainable forest-based development. Across Amazonia, groups who once opposed or were displaced by cattle are now adopting it, including Acrean rubber tappers and colonists.”

Using primary data he collected among rural and urban groups in Acre, Hoelle demonstrates, through a discussion of two processes that result in very different types of cultural expression, how cattle culture emerged in this unlikely place.

On the one hand, he notes, the subsistence uses of cattle led to cultural beliefs that were based on interdependence and resembled cattle complexes from other parts of the world. Yet local economic relationships with cattle could not explain the explosion of a “cauboi” (cowboy) model in which human control of cattle and nature was celebrated by men and women with shiny belt buckles, tight jeans, boots and a love of rodeos and “sertananeja” or “contri” (country) music.

Rubber tapper Jatobá Rocha was hesitant about cattle when Hoelle first met him in 2007. A year later, however, he bought a young bull named Tchoa, who quickly became a member of the family, pulling his own weight — literally, with an oxcart — and serving as a means of transportation for the Rochas. 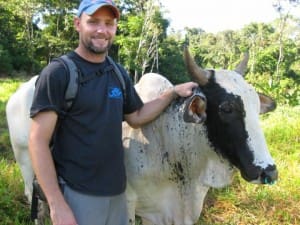 Hoelle, author of the forthcoming book, “Rainforest Cowboys: The Rise of Ranching and Cattle Culture in Western Amazonia,” emphasized that crafting appropriate policy solutions requires an understanding of the interlinked political, economic and cultural features of Amazonian cattle raising.

Hoelle explained that people raise cattle all over the world in different ways, from subsistence pastoralism in East Africa to large-scale capitalist ranching in the Americas, with smallholders who fall somewhere in between these economic and ecological systems. In traditional nomadic pastoralism, humans regarded their cattle as individuals — as the Rochas do Tchoa — and develop an emotional connection with them. With large-scale ranching, cattle are a nameless commodity.

“For the cowboys and ranchers, the objective is to raise cattle as if they were a crop to be harvested at the right time,” Hoelle said. “You don’t want to hurt the herd to the extent that you’ll jeopardize your investment, but you do need to dominate it.” This economic relationship is recreated symbolically in rituals such as rodeos, he noted.

“If, however, you’re relying on a cow for its milk, or if you’re going to ride it to the store, you have to establish a relationship with the animal,” he continued. Deep cultural connections form from that relationship, such as India’s “sacred cow” or the cattle complex in East Africa. Hoelle argued the same thing happens deep in the heart of capitalist ranching in the Amazon.

He emphasized that it isn’t necessarily ranching/pastoralism or capitalism/subsistence that explains the type of cattle culture that emerges, but rather the type of relationship that humans have with animals to secure products or services from them. “This really became apparent when I stopped looking at the ways that cowboys roughed up the cattle and focused instead on the affection they showed their horses,” Hoelle continued. “They’d name their horses, hug them around the neck and nudge them playfully, and probably punch you if you asked about eating their beloved equine.”

For the cowboys, horses were essential economic tools for securing the production of cattle; whereas for smallholders, the cattle served a similar function in terms of daily reliance. In both cases, cultural beliefs develop to protect vital resources.

Since the arrival of cattle in Acre, Hoelle said, these animals have been surrounded by violence, deforestation and displacement. “It is surprising that cattle raising and cattle culture have expanded across Amazonia, and especially in Acre,” he commented. “It is also troubling for those of us concerned with sustainable alternatives to cattle raising. My point is that you have to put that aside for the moment and attempt to understand why it makes sense for those adopting it.”

Understanding the appeal of the cowboy in the Amazon rainforest is critical to understanding the appeal of cattle raising, he noted. “The cowboy persona is something people strive for. It’s very strong there, and really important in terms of the way people interact with nature,” Hoelle said. “Being the strong manly type who can face the forest and transform it into this nice uniform pasture full of big domesticated animals is very powerful in the way it communicates ideals of masculinity, modernity and development.”

From a distance of thousands of miles, it’s easy for us here in the U.S. to decry the Acreans’ decimation of the rainforest to expand cattle-grazing land. Our instinct is to preserve the rainforest because of its vital contribution to the world. “But those who are living it see themselves in the same way pioneers and settlers have throughout history. There is a drive to tame the frontier — to control or cultivate nature,” Hoelle explained. While this tendency has declined in the U.S., it remains front and center for those attempting to make a living in a place where people really do feel that they are under constant assault from the forest, he noted. In this context, the cowboy is an appealing figure, while here it might be more common to romanticise the Indians.