Buyers scout for a bargain at FarmFest yesterday.

New tax breaks for fencing, fodder and water infrastructure were a key driver of producer inquiry at the annual FarmFest field days near Toowoomba on Queensland’s Darling Downs yesterday.

But uncertainty surrounding how the new arrangements will apply was also preventing the stimulated investment interest from translating direclty into new sales, several exhibitors told Beef Central at the field day.

New measures announced in the recent Federal Budget allow primary producers to claim immediate tax deductions on purchases of up to $20,000 on physical items for fencing, fodder storage and water facilities such as troughs, tanks, bores, dams, pumps and windmills.

Under previous rules producers have only been able to claim those purchases as deductions spread over much longer depreciation schedules such as 50 years in the case of fodder storage infrastructure such as sheds or silos, 30 years for fencing and three years for water infrastructure.

Most exhibitors in the fencing, storage and water infrastructure sectors at FarmFest yesterday told Beef Central that the tax breaks were triggering increased investment interest from producers.

However several noted that there was still a lot of uncertainty among producers as to how the $20,000 tax breaks would apply.

Recent changes in the commence date of the measures was also causing confusion. The initial budget announcement indicated that the new depreciation schedules would kick in for purchases made after 1 July 2016, however agriculture minister Barnaby Joyce has since announced that the changes have been backdated to include purchases made since 7:30pm on the night of the budget announcement on 12 May 2015.

(More detail explaining how the $20,000 tax breaks will work for primary producers will follow in a separate article currently being prepared for Beef Central by the Powers Financial Group)

Exhibitors Beef Central spoke with yesterday had varying views as to whether the new tax breaks were translating into new business.

Lorne Bobart from Camel Tanks said the company experienced its biggest first day ever at FarmFest this year, with an estimated 40pc increase in sales this year compared to the previous year.

He attributed the increase to producer interest in the $20,000 tax breaks now available. 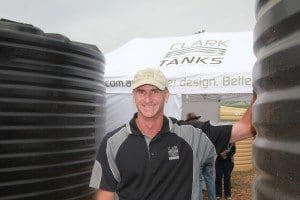 Clark Tanks business development manager Damian High said there was a noticeable increase in demand for the company’s range of purpose specific stockwater tanks over its rainwater tanks, which reflected increased interest driven by the tax breaks.

He said most demand was coming from producers who had done their homework and had spoken to their accountants and for whom turnaround time was very important, wanting tanks ordered, delivered and invoiced by June 30.

“I wouldn’t class it (the tax breaks) as a major trigger,” Mr High said.

“It is a call to action, rather than being a case of I am going to spend extra money on infrastructure that I hadn’t otherwise allocated for it.”

However he said interest in the tax breaks was manifesting in the form of specific requests for shed packages under the $20,000 immediate-depreciation threshold. 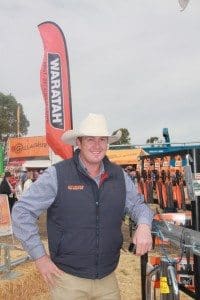 In the fencing sector, Lachy Radford from Waratah said inquiry was flowing through in relation to the tax breaks, with producers seeking clarification as to when tax breaks commenced and how the tax breaks applied to planned feral fencing purchases in particular.

“We’re certainly getting inquiry and phone calls from people asking what they eligible for,” Mr Radford said.

“It is mainly from people we are talking to about feral fencing, wondering how the tax break will work, and asking questions like if they do $60,000 worth of fencing, can they divide that into three claims each of $20,000.”

* Powers Financial Group will answer some of the key questions surrounding producer eligibility for the $20,000 tax breaks in a follow up article