Australian beef’s future lies in differentiating itself from beef produced more cheaply in other parts of the world, and embracing concepts like ‘sustainability’ is an important part of that process, a prominent beef exporter says. 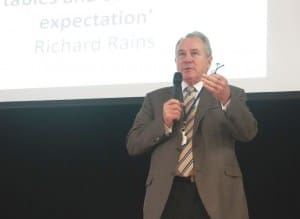 Richard Rains, former managing director of Sanger Australia, told the AgForce 360 Vision seminar in Roma, Queensland yesterday that Australia could not hope to compete on price in world beef markets against low-cost producers like Brazil and India.

Just in processing efficiency, alone, Australia had easily the highest costs among all major exporters. “To process an animal in Australia costs twice as much today as what it does in the US, and 2.5 times as much as in Brazil, he said.

Greater use of automation was part of the solution, but so too was differentiating our product more. “We cannot afford to be a commodity player in this space,” Mr Rains said.

“Until recently, the producer delivered what he or she wanted, and then tried to sell it. That’s not good enough anymore. I believe producers need to interact with their processors, find out exactly what they want, and what they are going to want in the years ahead, so they can produce a differentiated item that hopefully they will get a premium for. Sustainable claims will be part of that, along with grassfed, natural, organic no-HGP or other segments, in taking Australian product out of the commodity beef world into a differentiated, value-added product attracting a premium,” Mr Rains said.

Beef today is the highest-priced protein in much of the world, so retailers needed to differentiate it as much as possible, in order to achieve this record high price.

“The alternative is that the Australian industry certainly is not sustainable, in a financial sense,” he said. A long lead-time applied in the cattle industry, meaning producers needed to be preparing well in advance for such changes. Mr Rains said in his view, the recent dialogue about the merit of Australia engaging in the global roundtable for sustainable beef was very much a Queensland debate, with little or no knowledge or concern raised about the process in southern States.

“Anybody I have asked, south of the Queensland border, has no idea what I’m talking about when I ask them about sustainability issues in the beef industry,” he said.

“It’s a debate that has been largely driven, for some strange reason, by the Queensland Country Life newspaper. I know the non-government organisation, the World Wildlife Fund, has history in Queensland surrounding the land clearing debate, but I don’t think that is the end of the world.”

Mr Rains also sat in on the National Party orchestrated ‘square table’ conference process in Brisbane recently, and he said his interpretation of the outcomes from the closed-meeting contrasted starkly with those published in some print media. There had been no change of direction, as suggested, and Cattle Council of Australia remained an active member of the Global Roundtable process.

“Just selling beef as a commodity is not going to cut, it – Australia needs to have a point of difference, and it has every opportunity to deliver those niches,” he said. The term ‘sustainability’ was not something that the industry should be afraid of, Mr Rains said.

“Rather it should be embraced, and supported. I honestly find it very difficult to understand the level of recent debate on the subject. Most of the ‘anti’ sentiment surrounding Australia’s involvement with the Global Roundtable process that I’ve seen expressed in the paper argues that Australian beef is already sustainable, and does not need anybody else to tell us that.”

“If today we’re are not getting a premium for our product, then we need to do more to ensure that we can. I believe it’s to Australia’s advantage to engage with the Global Roundtable process, to put ourselves in that position.” Mr Rains said the Global Roundtable for Sustainable Beef was comprised of 50-odd stakeholder companies and entities, and it continued to grow. Just some of the participants included the likes of McDonald’s, Cargill, JBS, Elanco, Merck, Walmart, Samsung, Woolworths and the WWF.

“The major, major retailers of our product (Australian beef) are at that table, and I believe we need to be at that table as well,” he said.

“If we are sustainable, and the consumer wants it, why all the negative press from the National Party and others?” Mr Rains asked. “It’s imperative that all the segments of the industry get behind this initiative and create a definition of sustainability, and get on with the job. They key is having the right definition. True sustainability deals with three pillars: economic, environmental and social, in a model of balance, and most importantly, continual improvement.”

If a definition for sustainability could not be drawn up that the Australian beef industry could live with, then perhaps it might be time to withdraw, but there was no suggestion that that would occur yet. “The consumers want it, and I believe we should be driving that bus, to a sustainability claim that we can stand behind, but of course it has to be something that suits our industry.”

Mr Rains pointed to some stark contrasts between the response to the Global Roundtable process in some quarters in Australia, and in other countries.

“Canada, for example, is all over it. They say they don’t care what the definition is – yes it has to be negotiated, but we’re sustainable, and we want to get on with it. Canada says it wants to be the first country to supply McDonald’s and anybody else who wants sustainable produced beef.”

“I have to tell you, that attitude has really resonated around the world for Canada, while the negative press here (specifically from Queensland Country Life) has not done Australian beef any favours at all,” he said. Mr Rains said it was important that the Australian beef industry be ‘led by the hip-pocket’ into embracing sustainability.

Mr Rains said he did not see the World Wildlife Fund as the ‘bad guy in the room’, as has been portrayed in print media reports and by National Party Senators who have lobbied against the process.

“Of all the non-government organisations I’m aware of, I don’t see them as the real boogie man. But for sustainability to have credibility with the consumer, we have to have an NGO taking part, and for my part, the WWF is appropriate. And a critical point to remember – they carry just one vote in the Global Roundtable collective, which now includes 50-odd votes. To suggest they can in some way manipulate the outcomes under these circumstances is just ridiculous. They do not, and are not going to have the sway around the Global Roundtable group that some have led us to believe.”

At the end of the day, sustainability was all about continuous improvement, Mr Rains said.

“Everybody who has a property wants to leave it – perhaps to their kids – in better condition than how they got it. That, for me, signifies that you are sustainable,” he said.

All the fish used today through McDonald’s network worldwide was approved through the Marine Stewardship Council, providing an assurance over sustainability in the seafood industry.

A comment posted recently by a reader had suggested that because of the recent dialogue over sustainability, Australia should boycott, or avoid supplying McDonald’s.

“But here’s a quick snapshot: McDonald’s is the single largest purchaser of beef on the planet. It serves 70 million customers daily. I think they know their customers, and where their needs and aspirations lie.”

Mr Rains quoted Apple founder, Steve Jobs, who said Apple’s aim was to ‘invent products that the consumer did not know they needed, until it had been released – after which they could not do without them’.”

“That’s where McDonald’s is. They’re reading their customer. There’s no point waking up tomorrow, with the customers demanding sustainability, and then starting to do something about it. They want to be ahead of their consumer, and they believe that’s where their consumer is going, and they want to be ahead of the game in putting systems in place that will start to deliver sustainably-labelled product for their customers. I agree with McDonald’s.”

“Henry Ford once said, ‘If I had asked people what they wanted, they would have said faster horses’.”