A South Australian woman has pleaded guilty to the underfeeding of 29 cattle between June and September last year.

Images of the emaciated, lice infested cattle on a property near Myponga in South Australia have been broadcast on 7 television news this week. 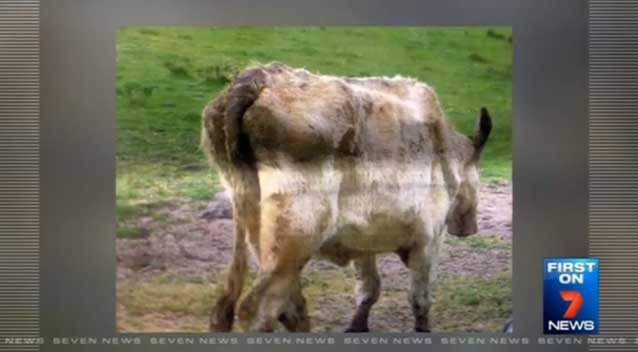 One of the images of the neglected cattle broadcast on Channel 7.

In April the Gristwoods were charged with 30 counts of ill treating an animal and two counts of failing to comply with an animal welfare notice.

The RSPCA alleged 29 cattle were emaciated and 11 more were neglected between June and September 2014 on the Gristwoods’ property south of Mount Compass.

Susan Gristwood, owner of the Adelaide Angus Stud, last week pleaded guilty to the charges in the Adelaide Magistrates Court and to breaching an order for a vet to see the animals.

The same charges were dropped against her husband, Doctor Ron Gristwood, who is a member of the Order of Australia for services to his field.

Mrs Gristwood’s lawyer told the court the neglect was not intentional but due to a number of unfortunate coincidences.

She had pneumonia at the time and her husband was aged 87.

According to a 7 News report, this drew a sharp response from Magistrate Susan O’Connor who repeatedly accused the defence “of not being candid”.
“He can look after patients but can’t rake hay to feed animals?” she said.

The court heard someone mysteriously opened gates on their property which led to the cattle contracting lice, and that an RSPCA inspector let the animals into an area that had the poisonous weed, bracken fern.

The case was adjourned until October 9.

“RSPCA South Australia attended the Adelaide Magistrates Court on Wednesday the 2nd of September, to present evidence against Susan Gristwood, who has been charged with multiple ill-treatment offences under the Animal Welfare Act.

“It is alleged that an RSPCA South Australia Inspector visited the Gristwood property in late August 2014, finding cattle and calves in emaciated condition suffering badly from lice infestation. It is also alleged that the Inspector found the bodies of 10 deceased cattle at the property.

“Following an examination by an RSPCA veterinarian, the cows were seized by RSPCA officers and transported to an agistment property where they regained significant body condition and their general health improved. One cow’s bodyweight increased by 44% in just two months.

“The matter is still on going before the courts, with the next appearance scheduled for October 9th.”