The head of Queensland’s specialist police stock squad has moved to dispel rumours his team’s focus is shifting away from stock and rural crime investigations. 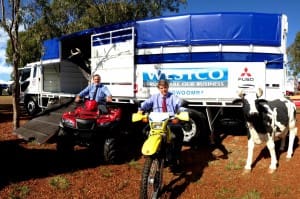 The drug ‘ice’ in particular now poses a significant threat of harm to rural communities, he said, as do emerging levels of organised crime outside larger cities.

The ever-evolving nature of the internet and increased connectivity for rural residents also meant online crimes such as fraud and child exploitation material offences were on the rise.

SARCIS is a unique and specialised rural crime unit, with members located in ten locations across rural and regional Queensland.

Squad members investigate rural crime using specialist skills, industry knowledge and community engagement, D.I. Dowie said. It is focused on the detection of offences that cause harm to the community.

The unit is attached to the Queensland Police State Crime Command, which D.I. Dowie said had extensive resources and a charter to target and disrupt organised crime, investigate serious crime and provide support to regional police.

“In a bid to disrupt the criminal element, SARCIS will actively seek out intelligence and support the districts in addressing these types of crimes,” he said.

“SARCIS has a duty to prevent crime and for this reason, the community can expect their SARCIS officers to be speaking to them about the threat posed by organised criminals (especially drug dealers), online fraud, online child exploitation and firearms theft and trafficking.

“We urge rural communities and industry to engage with their local police and SARCIS officers to combat such crimes,’ he said.

The involvement of SARCIS officers in investigations that may not appear to be specifically ag related has led to concerns being relayed back to SARCIS that its focus is changing.

However D.I. Dowie said that was not the case.

“There is no intention to shift the focus of the squad’s current responsibilities away from stock and rural crime.

“We are very much aware of the hardship being faced by the industries due to drought and the price of restocking.

“We remain committed to detecting, deterring and solving stock and rural crime.

“Our SARCIS officers are being upskilled in new investigative techniques and technologies to improve their capacity to effectively and efficiently conduct these investigations,” Detective Inspector Dowie said.

He said the changing nature of crime was underlined by the findings of the Queensland Organised Crime Commission of Inquiry, which found that organised crime posed a significant threat to rural Queensland.

It also found that the drug ‘ice’ poses the most significant threat of harm to the community.

Independent research by Flinders University recently found, statistically, that rural Australians are at a greater risk from the drug ‘ice’.

“These crimes are harming regional communities and they are not just confined to big city centres,” he said.

Anyone with information which could assist in helping police with rural crime investigations can contact Crime Stoppers anonymously via 1800 333 000 or crimestoppers.com.au 24hrs a day. Crime Stoppers is a registered charity and community volunteer organisation working in partnership with the Queensland Police Service. For all non-urgent police reporting or general police inquiries contact Policelink on 131 444.