The award is named in honour of the late Alward Foster, who joined the NTCA’s Pastoral Real Jobs Program as an employee on Newry Station on the West Australian border, and later joined the NTCA to mentor young indigenous people and Indonesian exchange students in the NT.

The program was established to to attract Indigenous Territory men and women to cattle station life, and is supported by the NTCA, the Central Land Council and National Indigenous Pastoral Enterprises.

Stewart is also a participant in  the Pastoral Real Jobs Program. He worked at Manbulloo Station near Katherine and Auvergne near Timber Creek before becoming leading hand at Morstone Downs near Camooweal.

Morstone Downs managers Ian and Kerrie Fletcher say Stewart is an independent man and a “great role model for the younger generation”.

“He balances his family responsibilities, culture and working in a non-Indigenous environment very well and without hassle. 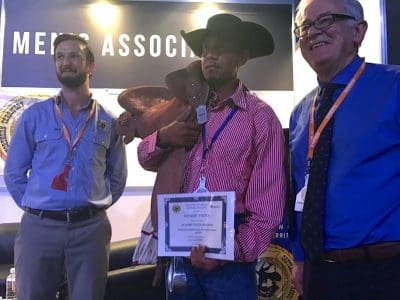 “He has been known to take on a few young fellas that follow him on his journey and without realising it, he mentors and supports them.

“Sometimes it works out, sometimes it doesn’t. Stewart acknowledge this and continues on his journey.”

The Fletchers describe him as a “bright, talented gentlemen with a great work ethic”.

“He has become what the Real Jobs Program is intended for.”

“He is constantly open to learning new skills and developing himself.”

NTCA chief executive Tracey Hayes said: “We’re delighted that such a role model as Stewart is the first winner of this award.

“Indigenous people played a key role in opening the Northern Territory to pastoralists and we want to attract more Aboriginal stockmen and women back to the industry.

“Pastoralists are keen to play their part in combating Indigenous disadvantage.”

The namesake of the award, Alward Foster, became a full-time NTCA staff member after  participating in the Pastoral Real Jobs Program.

His job was to train, mentor and support young Indigenous people in the Real Jobs Program and Indonesian students from the NTCA Indonesian Australia Pastoral Program.

An NTCA statement described Alward as a natural born leader, who once went to Canberra and showed then Prime Minister Julia Gillard how to crack a stockwhip.

“The award recognises a young Indigenous leader with the attributes of the Aboriginal stockmen and women who contributed so much to building the cattle industry in the Territory.”