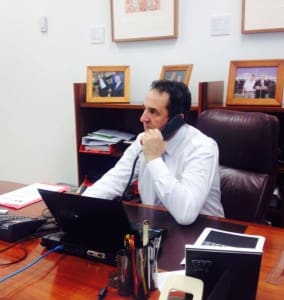 The Senator who chaired the Senate inquiry into grassfed cattle industry systems says he has been left gob smacked by agriculture minister Barnaby Joyce’s formal response to the committee’s recommendations.

Labor Senator for WA Glenn Sterle said Mr Joyce has refused to accept the clear message from producers that they want full control of their own funds, and has failed to go into bat for their interests in the face of bureaucratic resistance.

Senator Sterle and his fellow members of the Senate Rural and Regional Affairs and Transport committee handed down seven recommendations for grassfed cattle industry reform last September after considering hundreds of submissions and conducting several public hearings around Australia.

The first and main recommendation was for the Government to legislate to create a new grassfed producer elected, owned and controlled body that would receive all grassfed levy funding in future instead of Meat & Livestock Australia.

Mr Sterle said Mr Joyce’s reasoning in rejecting that recommendation, in which the Minister said giving levy funding to a new grower organisation would compromise the new group’s independence and make it beholden to the Government, was “absolute bullsh*t”.

“That number one recommendation came at the request of the people we met, producers,” Mr Sterle told Beef Central.

“I am absolutely gob smacked that Barnaby who sees himself as the friend of the bush could absolutely poo-poo the idea when the industry had come together and asked for it.

“Who the hell is government to stand there say you have got it all wrong?”

“And my experience when I was dealing with truckles is that when you have industry come together and say this is what we want to do, and this is the best way, who the hell is government to stand there and say you have got it all wrong?”

Senator Sterle said the Senate Committee had travelled widely and talked to a lot of producers before producing a report that it was confident accurately reflected their views. But the minister did not like what it said and the Senate Inquiry process he initiated had backfired on him, Senator Sterle said.

“Producers made it very clear that the return to the farm gate has been absolutely slashed.

“The industry said they were in desperate trouble for a number of reasons.

“To deny the growers an opportunity to form their own body and this is not just one group but all of them working together to have equal representation from their areas and their zones, to actually have the ability to collectively decide, discuss, argue for and against how their dollars will be spent, and to be just smacked on the head by the minister is beyond the realms of impossibility.”

Senator Sterle said that in the face of a strong message from producers that they wanted full control of their levies, Government departments should simply “get out of the way and make it happen.”

“This is an absolutely classic example of bureaucracy doing everything it can to ignore the wishes of those who are paying the levy.”

He said growers should be now be given the right to vote on whether they want the senate committee recommendations as handed down last September enacted.

He said the Minister had gone out on a limb to attack his own Government over the Watermark coal mine, and had not shown the same commitment to support producers who were in dire straits and told a senate committee they believed their industry would be better off it was in full control of its own money.

“If he had the same passion for our cattle producers and our rural communities that are outside the Liverpool plains as he does to stop a coal mine then you know what, we would all be popping the corks.”