A SERIES of soil carbon projects across Queensland and New South Wales are expected to yeild carbon credits by the end of next month, with the industry regulator working through the auditing process.

The discussion came up at the tenth annual Carbon Farmers of Australia conference in Albury, NSW, today – which had a crowd of more than 400 and 100 online.

While soil carbon was a big focus of the conference, only one project has generated Australian Carbon Credit Units in seven years of operating. But the industry looks set for a change with two major aggregators expecting to yield credits soon.

The industry’s largest project holder Agriprove says it has six projects which have shown carbon increases and are working through the process. 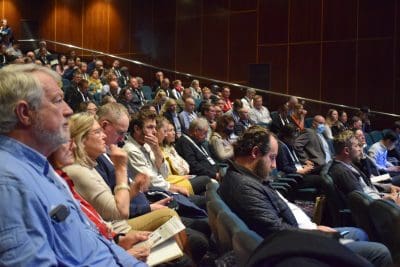 About 400 people attended the Carbon Farmers of Australia conference in Albury today.

Carbon Link, which was derived from RCS grazing, has recently completed a second-round soil samples on 20,000ha of land and the company says it has shown promising results. The results are currently being assessed by the Clean Energy Regulator and the company is hoping credits will be awarded next month.

Commercial director Andrew Gatenby said he was keen to hear back from the regulator.

“This will be the largest longitudinal study of soil carbon, at scale, in a commercial environment anywhere in the world,” Mr Gatenby said.

“The preliminary findings look very promising, despite the properties facing significant seasonal challenges such as 2-3 years of drought (60pc of average rainfall during 5 years), impact from large fires and pasture dieback.

“Interestingly, carbon was found at levels that only the Carbon Link / CSIRO technology can detect.  The project results will be reviewed by the Australian Government’s Clean Energy Regulator over coming months.”

Mr Gatenby said the results so far were encouraging for the growing soil carbon industry.

“We are encouraging Australian farmers to consider the benefits of implementing practice changes which improve productivity, enhance soil health, and also offer financial benefits through the production, measurement and issuance of ACCUs.”

“Our research indicates that soil carbon projects have the potential to be very profitable for landholders on large-scale grazing country.

“Our existing projects, suggest a well-managed beef operation can generate additional returns from soil carbon, that are on par or greater than the average return for Queensland beef producers, exceeding $100/ha/year (net of costs – unaudited).”