Senate report not an attack on CCA or MLA: Chris Back 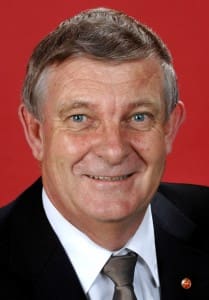 Liberal Senator from WA and career veterinarian Chris Back said the Senate grassfed beef report was the result of an in-depth inquiry and wide-ranging consultations by Senators with no vested interest in the industry.

The participating Senators had effectively started with a blank sheet of paper and made recommendations that they believed offered the best chance of maximising benefits for producer levy-payers.

Senator Back said he had seen some commentary since the report’s release last week suggesting the recommendations were ‘anti-Cattle Council’ or ‘anti-Meat & Livestock Australia’.

He emphatically rejected that was the case, saying both groups could benefit from the model recommended in the report.

“What it’s about is giving the people who have the ultimate accountability and responsibility the resources and revenue to be able to do their job properly,” Senator Back told Beef Central.

At the moment producers had high expectations about what the peak industry council CCA should do, but it was not adequately funded and relied significantly on funding from the service provider MLA.

That relationship was wrong, Senator Back said.

He said CCA, or a reformed version of it, could become the producer body that controls grassfed levy income in future. Ultimately the shape of that producer organisaiton would be a decision for producers to make.

“How anyone could say you’re trying to decimate CCA, when in fact it could well be that CCA becomes very much better resourced both in terms of people and dollars,” Senator Back said.

“I would have thought they (CCA) would be saying, well what a fantastic opportunity, this gives us the chance to do what our producer members expect of us and what we legitimately see as the role of the peak body.”

The recommended model also allowed MLA to return to its intended role purely as a service provider for industry marketing and R&D, ‘unhindered from other responsibilities’ such as providing feedback to producers.

“Is that their role to be providing feedback to producers when they’re not the peak body?” Senator Back said.

“The peak body is supposed to be the body that directs the operations and oversees and judges and audits and determines whether the service provider is doing a good job, but then it turns around says ‘oh, by the way can we have some funds this week so we can pay our staff.

“So do you see my message, this is no criticism at all of anybody, it is that the relationships at the moment are wrong.”

“The question has been asked whether the peak body, in recommendation one, needs to be established by legislation. It might not need to be except for the fact that the government matches the R&D component of the levy on a dollar for dollar basis. I would have thought, if statutory funds were being contributed, then a legislative instrument might be necessary,” Senator Back said.

Senator Back said producers spent $50m a year on levies and had an expectation that their peak body would hold those funds, would direct the operations of service providers and would report back to them.

“We consulted widely, we travelled the length and breadth of the country, we got a lot of submissions, we spoke to people, we had a very good relationship across the committee and of course none of us have a vested interest so we’re in the happy position of genuinely having been able to independently make recommendations.”

Separating producer and processor levies would also provide greater transparency throughout the supply chain without necessarily affecting the ability for processor and producer funds to be jointly used for areas of common industry benefit such as marketing.

Senator Back also said he believed that groups representing producers and processors could speak with one voice when they agreed on issues without the need of the Red Meat Advisory Group.

“There is nothing in a democratic system that says where people are in agreement, such as the Korea Australia Free Trade Agreement, or the Japan FTA or China FTA, that the processing industry and the producing industry can’t give each other a phone call and say our voices would be enhanced if we were to go with one body to the minister and give he or she advice on this issue.

“In an issue such as the live cattle export ban, the most necessary time in the industry’s history probably that they needed to speak with one voice to the minister, they couldn’t.

“Therefore the committee asks the question, does the Red Meat Advisory Council need to exist, because you can still have plenty of instances where both or a number of bodies can come together for common good, and the Aust-China FTA would be a prime example of that.”

Senator Back said most of the feedback he had personally received about the report and its recommendations had been positive.