A second international visitor has been refused entry to Australia as international animal health experts warn of the continuing spread of African swine fever through Asia and the world.

Minister for Agriculture, Bridget McKenzie, said a 60 year old Vietnamese man who arrived in Sydney with nearly 4kg of pork-filled mooncakes stowed in his luggage had been fined and was being sent home for failing to declare the food. 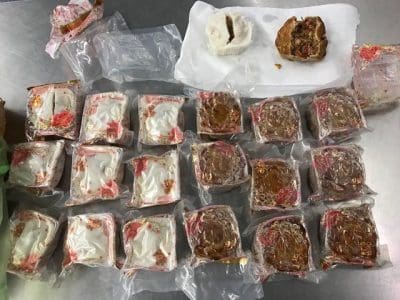 The passenger had 4 kilos of pork filled moon cakes.

“It’s one of the heightened measures our Government put in place to keep the devastating disease out of Australia and to protect our 2700 pork producers.

“A recent round of testing found nearly 50 per cent of pork products seized from air travellers tested positive for African swine fever.

“That’s why I have a zero tolerance approach to those who intentionally do the wrong thing and lie about what they’re carrying.

“If pork products carrying the virus get past our border, are eaten by family and friends and the leftovers fed to pigs then we’ll be in a world of pain.

“Swill feeding, or the practice of feeding leftovers containing meat to pigs, is not permitted in Australia, something our pig farmers are very well aware of.

“But there are hobby farmers and pet pig owners that we need to get that message through to.

“There’s also 10 times more feral pigs than farmed pigs in Australia who eat what they find at landfill sites as well as in the bush.

“This disease is already responsible for the loss of a quarter of the world’s pigs – there’s no vaccine and no cure.

“A change of this magnitude in the global protein supply chain has ramifications for international food security, depressing prices for feed grain, as well as increasing prices and competition for other protein sources.

“So next time you’re passing through an airport and you think it isn’t worth declaring the pork jerky in your handbag, or the mooncakes in your case –  think again.

“Your actions really do matter when it comes to safeguarding Australia from this disease.”