SE Qld added to 75pc of state under drought-declarations 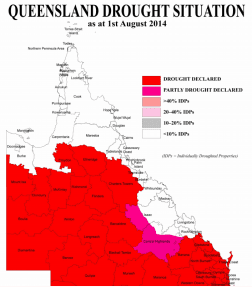 Queensland drought situation as at August 1, 2014. Click on map to view in larger format.

Farmers in Queensland’s south-east corner may qualify for assistance from the Queensland Government after the region was officially drought declared today.

The declaration follows a deterioration in rural pastures in the region because of a lack of significant rainfall and will have no impact on domestic water supplies.

The drought-declared area now extends from Mt Isa in the north west to Coolangatta in the south east and covers 75.5 per cent of the state.

“Unfortunately, the dry winter and heavy frosts from the cold nights have hit pastures in the south east,” Mr McVeigh said.

“The drought now has a vast geographical spread across our state.

“In response, the Queensland Government has so far allocated $62 million towards assisting those farmers doing it tough.

“But this declaration will have no effect on domestic water supplies in the south east.

“The 12 dams in south east Queensland that contribute to the water supply system are currently at an average of 86 per cent of their full supply capacity.”

Seqwater today said south east Queensland’s water security status was “high” and added that irrigation schemes in the region are at or near 100 per cent allocation.

Earlier this week Brisbane’s Courier Mail reported that the area stretching from Bundaberg on the Queensland coast to Coffs Harbour in northern NSW and west to St George has recorded its lowest rainfall season since 1901.

Primary producers may be eligible for the Emergency Water Infrastructure Rebate (EWIR) and other assistance measures under the Drought Relief Assistance Scheme (DRAS).

Source: Qld Minister for Agriculture John McVeigh. More information regarding DRAS can be found at www.daff.qld.gov.au or by contacting 13 25 23.