Rural and rugby tour to Argentina and Uruguay in March

A unique opportunity to explore successful cattle, sheep and farming operations in South America – including visits to ranches worked by traditional gauchos and a saleyard where up to 50,000 prime cattle are sold each week – is available through a specially-tailored tour being led by well-known rural journalist Pete Lewis. 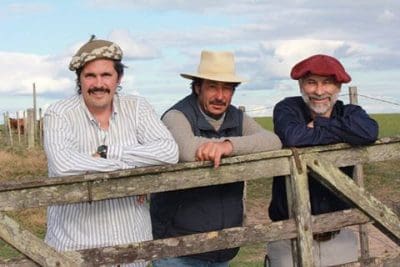 Pete Lewis (right) gets into the gaucho spirit during a reconnaissance tour of Argentina and Uruguay last October in preparation for this March’s Rural and Rugby Tour.

The former ABC-TV Landline reporter has a few places remaining on his first Rural & Rugby Tour to Argentina and Uruguay in March.

As the name suggests, the nine-day tour combines farm visits and footy – the Queensland Reds’ first Super Rugby match on South American soil against the Argentinian Jaguares at the Velez Sarsfield Stadium in Buenos Aires on March 25.

“We’ll be meeting the men and women running some of the most successful beef cattle, sheep, cropping, citrus, wine and olive operations anywhere in the world,” Pete said.

The tour also takes in the exciting cities of Buenos Aires, Rosario, Punta del Este and Montevideo in comfortable air-conditioned coaches  and fast ferries with fluent English and Spanish-speaking guides.

“Along the way we’ll get a taste some of the best beef and lamb in the world as well as some of the finest “new world” wine varieties such as Malbec  and Tannat.”

The tour group will also inspect one of South America’s most important livestock selling centres – the Mataderos in Buenos Aires – where 50,000 head of cattle are sold each week.

Time is running out to join the tour however, with bookings set to close on February 15. The tour departs on Friday, March 17.

For more details or to be part of this unique insight into South American agriculture, and an exciting milestone for Queensland Rugby, contact Pete Lewis on 0408 722 113 or by email pete.ruralandrugbytours@gmail.com