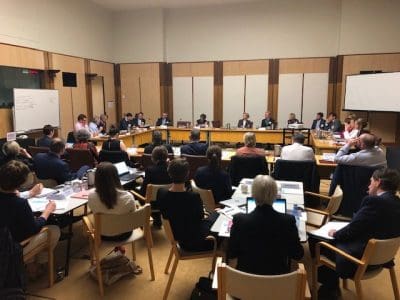 She said the roundtable was focused on making sure Australia was taking all appropriate actions to keep the disease out, but also had plans to eradicate it quickly if it were to arrive, and could play a role in supporting international food security.

“Our first priority is to keep it out of Australia but we also need to make sure we are prepared in case it does arrive – after all about 15 per cent of the product we’ve confiscated at the border has tested positive.

“The Australian Government is playing its part, industry is aware and watchful and we need the community to take this seriously and do the right thing.

“What I heard at the roundtable was the need for more forums like this where all parties can come together, test our respective systems, and share perspectives and knowledge.

“There was a lot of goodwill and consensus around the need to improve communication not just between governments and industry—like those represented today, Australian Pork Limited, MLA, Sheep Producers Australia, Australian Meat Industry Council, Stockfeed Manufacturers, and Grain Growers—but also with the whole community.

“I’ve asked my department to actively engage with international student associations and tour operators to make sure the message is getting through to people in African swine fever countries—don’t bring pork products in through the airport or the mail.

“We’re also increasing the testing of the confiscated pork we seize through our mail centres and airports, and I’ll be sharing those results with industry as soon as I have them.

“We’ll be holding a simulation exercise later this year to test our disease response capabilities to make sure we’re as prepared as we can be – should the unthinkable happen. The exercise will involve all those with a stake including state and territory departments, the pork industry and Animal Health Australia.”

Australian Pork Limited’s chief executive Margo Andrae said the Australian pork industry was an important contributor to rural and regional economies providing 36,000 jobs and is worth $5.3 billion to the Australian economy.

“Our industry is very proactive in managing biosecurity risks and today is an important reminder that whether you have a pet pig or 10,000 pigs you have a responsibility,” Ms Andrae said.

“Most importantly this devastating disease doesn’t affect people and isn’t in Australia so all Australians can continue to enjoy pork and pork products.”

Minister McKenzie said it was important to remember that African swine fever wasn’t just a threat to Australia; in some countries it was having disastrous consequences and causing social and economic impacts.

“China’s says it will have a 10 million tonne pork deficit this year – that is more than the total amount of pork traded internationally each year.

“Some Chinese consumers will be looking to substitute pork with other meats like poultry, beef and lamb but China has said it will struggle to fill the gap with domestically produced meat.

“And while we don’t have direct market access for poultry and pork we can expect that those countries that do will be sending product to China. That may present an opportunity for our producers to ‘backfill’ in other markets so that Chinese consumers can continue to access the protein they want.”