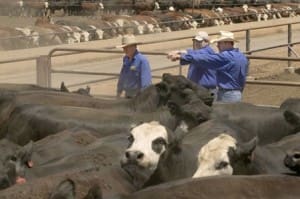 The Australian beef industry’s history in the field of risk management has not been a happy one, with two failed attempts to established a live cattle futures contract over the years, and Chicago Mercantile Exchange’s more recently proposed 90CL grinding beef contract seemingly dead in the water.

Despite that history, there is no doubt that there is still an enormous amount of volatility within the Australian cattle and meat sector.

Just this calendar year alone, the Eastern Young Cattle Indictor has range from 285c/kg to 361c/kg over the past six months – a 27 percent variation in value that would leave many forms of business gasping at swings involved. Meat prices aren’t much better, with the imported 90CL meat price into the US varying by 23pc in a matter of months last year.

It’s in this context that international risk management firm INTL FCStone, has been working to develop a suite of financial products that have been moulded to the Australian market, which it will showcase in an upcoming seminar for meat industry stakeholders next month.

That was borne out of both input costs (within the grainfed sector, the cost of feeder cattle and the cost of grain, for example) and the cost of outputs (for example the cost of the carcase meat or trimmings) sold into the international market. Overlaid on that was the performance of the A$ and international currency movements, meaning the industry faces ongoing market risk – all of which can be managed, FC Stone Australia says.

“Our risk management philosophy is to utilise existing tools and where necessary, develop tools which allow our customers create margin businesses, and to move away from the whims of the market,” Mr Quilty said.

He said in all the past instances where risk management tools like cattle futures had been launched, they had failed because of lack of liquidity, and the inability of buyers and sellers to get together.

“In Australia in the past, there’s often been too many sellers, and not enough buyers, or simply that the market is all sitting on the same side of the ledger. To offset risk, two players are needed – a buyer and a seller – and in the past, we’ve always had this issue with liquidity.”

What FC Stone Australia is now attempting to do is bring a ‘northern hemisphere’ summer demand for Australian beef, and offset that against the traditional supply pattern out of the southern hemisphere.

“We have the natural seller out of Australia and New Zealand, and the natural buyer out of North America, but we think that will transfer over quite easily into Asian buyers as well,” Mr Quilty said.

“We think we can leverage our global presence to help make sure Liquidity is no longer the issue that it once was.”

Through the development of its own Burger Blend Index, FC Stone Australia had been able to tie in that buyer-seller relationship. The Index basically reflects the demand for a typical 77CL burger pattie in North America, based on both the USDA and Urner Barry’s Yellow Sheet report on daily pricing by US grinders.

“We’ve found with the index that we’ve been able to establish price relationships, not only for trimmings as used in the burger industry, but also finished cattle, against the burger index, it is a swaps contract that meets many needs of the market” Mr Quilty said.

“The other step forward is in being able to price-relate US live cattle futures to the value of Australian fed cattle and feeder cattle prices.”

This work, looking for correlations and price relationships, has been carried out over the past 12 months –  by the FCStone team in both the US and Australia.

This work has led FC Stone to the conclusion that it is possible to hedge the input of grain and feeder cattle in Australia, and the output of fed cattle, trimmings and carcase beef in Australia, based on the index.

This will operate under FC Stone Australia’s Integrated Risk Management Program (IRMP), an advisory platform, which operates separately from the ongoing OTC and derivatives that the company offers.

“The US live cattle futures information is available everywhere on a daily basis, but the way in which we have been able to draw that into an Australian application, and the price relationships and foreign exchange, are the critical parts of what has been achieved over the past year of development,” Mr Quilty said.

The full day program will include sessions about better understanding where price risk lies along the beef supply chain, and the ability to manage that risk.

A number of key speakers from North and South America will address the gathering:

A series of local speakers will follow, discussing risk management issues within Australia: the burger swap role in Australia’s cattle meat industry; the deregulation of grain and its impact on lotfeeding margins; foreign exchange and the role the A$ can play in Asia; and a weather outlook with a focus on understanding El Nino.

A panel session and discussion about hedging solutions available to Australia will complete the seminar.

“We’re of the view that with the utilisation of existing tools and the development of alternative solutions, the Australian beef industry can enjoy the benefits of risk management which is evident in the US,” Mr Quilty said.

“That’s not just among the large companies working in the meat industry, but also producers and lotfeeders, financial institutions and others. Banks are now actively encouraging their rural customers to adopt such tools,” he said.

“There’s been a gradual shift in this direction, and we’re confident we’re going to be able to offer financial solutions to everyone in the supply chain, even live cattle exporters.”

Click here to register for the event, or email fcstoneaust.marketing@intlfcstone.com