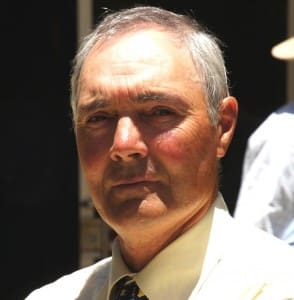 Overseeing a restructure process that aims to give grassfed cattle producers more control over their industry stands as a highlight of Andrew Ogilvie’s presidency of the Cattle Council of Australia.

Mr Ogilvie’s three-year term came to an end at the CCA’s Annual General Meeting in Sydney this morning.

The new CCA board will elect his successor on Friday.

Notably, this morning’s AGM was the first to be held under a new and more inclusive membership structure, which is the result of a reform process initiated by CCA when Mr Ogilvie first became president at its AGM in Longreach in 2011.

The new structure, which was formally introduced in January this year, allows for individual grassfed producers to join CCA as direct members and enables CCA’s decision-making to benefit from improved access to cross-sectoral expertise through the use of new consultative committees.

Despite the recent changes CCA may be facing even further significant changes ahead, if industry-wide reforms recommended by the recent Senate Inquiry into grassfed beef structures are implemented.

When Mr Ogilvie was first elected as CCA president at Longreach three years ago, he predicted to Beef Central that the biggest challenges the council would face during his presidency were unlikely to have yet emerged.

“The most challenging challenges are the ones that come up that we don’t see on the horizon,” he said at the time.

The comments were not so much prophetic as simply realistic, based on the lessons learned from many years in industry representation.

Indeed when Mr Ogilvie came into the job the Australian cattle industry was attempting to manage the impact of a major unforseen broadside delivered by the then Gillard Government five months earlier when it suddenly suspended Australia’s large live export trade to Indonesia. The ramifications of that rushed decision are still playing out through a class action against the Federal Government today. 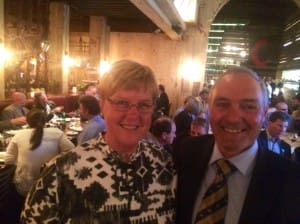 With his term now at an end, Mr Ogilvie nominates the sudden emergence of the Senate Inquiry as one of those sudden broadsides that the council had to deal with during his presidency.

“There are always challenges in this industry that you don’t see coming at you, and certainly the Senate Inquiry and the fallout from that is going to be an ongoing challenge to produce a body that is going to achieve what we want.”

Despite the uncertainty still surrounding the final restructure outcome, Mr Ogilvie says the progress made on reforming the national peak representative body stands as a highlight of his time as CCA president.

“The restructure is not finished yet of course, because we have had the Senate Inquiry into grassfed levies and the resulting recommendations from that, which we’re currently as a board working through,” Mr Ogilvie said.

“But we have moved a substantial distance down that track.

“I think it is pretty significant, it is moving towards giving grassfed beef producers a body that is accountable and transparent, hopefully a body that is well funded and in charge of its own destiny.

“The Cattle Council is determined to achieve that outline, and it will happen after my presidency, but all of these things are the result of a lot of people doing a lot of work, not one person’s work.

“The CEO Jed Matz has been instrumental in putting together all of that on behalf of the board and Cattle Council, it is a pretty good achievement.

“I think what producers need to do is to feel that they are control of their industry and can call the shots occasionally and if we can get a structure that can provide them with that sort of confidence, I think we’re probably a long way to making them a lot happier.”

Mr Ogilvie said there was still a lot of detail and consultation to work through before a final grassfed industry restructure can be secured.

CCA’s recent decision to move its preferred position on restructure into line with several other grassfed producer groups by supporting the Senate inquiry’s recommendation that all grassfed levies flow directly to one producer owned, controlled and elected body, instead of to MLA, was just a first step, he said.

“It is only a start and we need to work with the Minister and industry about how we proceed with it. So it is only in its early stages yet,” Mr Ogilvie said.

“There will be consultation with everyone concerned, Ministers, the Departments of Agriculture, State Farming Organisations, producers and other industry groups.”

Mr Ogilvie said a further highlight from his three-year term included the progress that had been made on trade deals with important markets such as Japan, Korea and China since the Coalition Government had been elected.

The evolution of Australia’s position on demonstrating sustainability also dominated headlines while Mr Ogilvie was in the chair.

“That was an issue around sustainability that we thought we had heading in the right direction (via the council’s participation in the Global Roundtable for Sustainable Beef process), but then along came the ‘Square-table’ with its political interference and we had to change track there.

“I think that was a significant milestone for the industry.

“What we could demonstrate is that the industry wants to be in charge of its own production system and its own outputs, so what we couldn’t achieve at a global level we are certainly working on achieving now at a national level, and I am pretty confident that our national sustainability credentials will stand anybody’s scrutiny.”

Balancing the twin roles of being a cattle producer and a full-time national industry leader had been extremely rewarding from a personal point of view, Mr Ogilvie said, but also had been “very demanding on your business and also the people around you”.

“I have had great people both in Cattle Council as board members and staff, and my family at home helping with the business. Without those people you couldn’t do the job.”

Asked if he had learned anything in the past three years that had surprised him, he said one thing that continually surprised him was the level of commitment people had to the industry and the amount of work they were prepared to put in to see it prosper.

“And quite often it is not paid work either, it is their own paid work and intellect,” he said. “It is unappreciated I think by a lot of beef producers just how much work is done at a national level on their behalf.”

On the outlook for grassfed producers ahead, Mr Ogilvie sees reason for optimism when the dry conditions gripping many parts of Australia finally breaks.

“Hopefully producers are about to see better prices beyond the farm gate,” he said.

“The global demand for beef is unprecedented, but we have had unprecedented dry times throughout Australia too which is a huge flood of cattle and depressed prices.

“That has got to end sooner or later, and we’re looking at some pretty good prices.”