THE recent early-February peak in the Eastern Young Cattle Indicator at 451.25¢/kg poses the question: Are farm-gate prices the highest they have ever been?

The short answer is “yes” in nominal terms, but “no” in real terms, judging by content in an important new report being issued by MLA this evening.

Market information and NLRS manager Ben Thomas and his team have been observing cattle price trends and the fluctuating EYCI, and recently decided to investigate the history of cattle prices in real vs nominal terms, since 1970. The quarterly national average yearling steer price in Australia has been plotted in a graph between 1970 and 2014 in real (2014 dollars) and nominal terms. Even though yearling prices have begun 2015 on a strong note – averaging between 400¢ and 450¢/kg – they are not high enough in real terms to match the peaks during the 1970s, the report finds.

That said, the low points in the cattle market cycle of 2013 due to widespread drought conditions, causing a huge influx of cattle onto the market, did not dip as low as the troughs seen in the 1970s Beef Slump era.

Adding to this, through increased investment in trade and consumer marketing globally, volatility in cattle prices has decreased markedly in recent years, greatly reducing the price risk of being a participant in the Australian beef industry.

MLA’s report (Click here to read full document) outlines a brief history of cattle prices from 1970 to the present and examines the key factors that have influenced the industry over that time.

Where do cattle prices stand now?

In real terms, current prices are lower than the highs of the 1970s, but they are also higher than the troughs, the report found. The considerable degree of market volatility has been tempered by an increased diversification of export markets and Free Trade Agreements, limiting the ability of key export markets to move to protective measures when faced with falling domestic prices.

In fact, before 1987 the standard deviation, (a measure of volatility) of real cattle prices was 160¢/kg (carcase weight) while after 1987 it was 54¢/kg. While real prices have fallen over the past four decades, so has the price risk of being a participant in the industry. 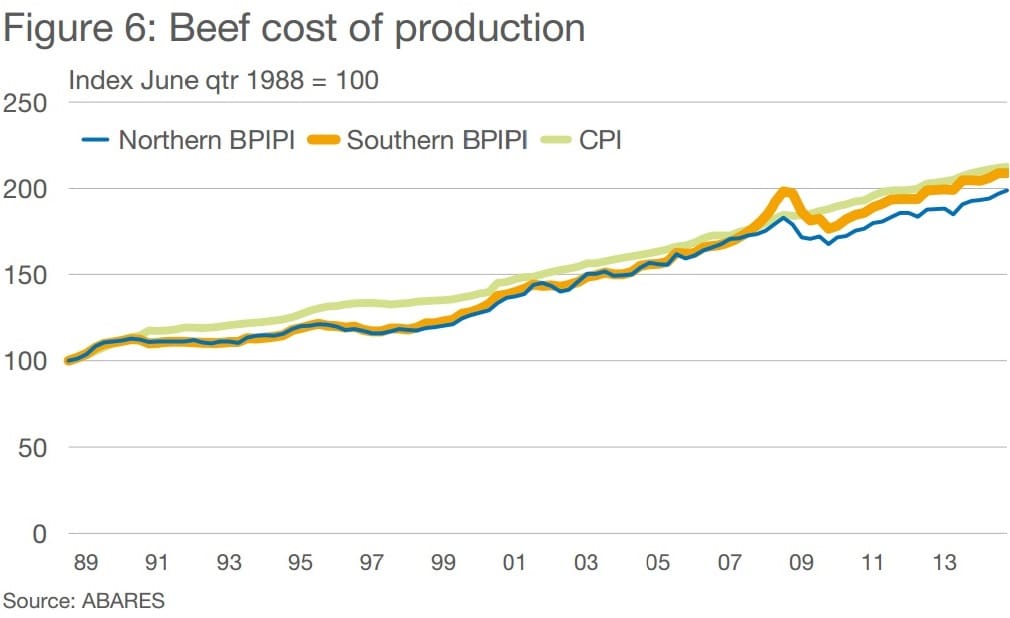 Furthermore, focusing on post-1987, while farm-gate returns fluctuated with seasonal conditions and trade developments, long-term real prices have remained relatively flat, as illustrated in Figure 1. Current prices, at around 400-450¢/kg (2015 dollars), are roughly in line with the real returns received in the late 1980s.

Looking at the beef cattle business as a whole, farm input costs, while increasing over time, have kept pace with inflation – Figure 6 illustrates the Northern and Southern Beef Producer Input Price Index (BPIPI)  and the Consumer Price Index (CPI) since 1988.

While indicative farm incomes have fluctuated with cattle prices, input costs and productivity, MLA’s report says they have had a relatively flat trend in the long term, as illustrated in Figure 7. Yearly beef producer farm cash incomes have averaged about $94,000 in the north and $70,000 in the south (ABARES), in real terms (2013-14 dollars), over the last 20 years. Hence, while real prices aren’t what they once were, in the long-term, farm cash income has not been significantly eroded.

MLA’s report says cattle prices are expected to improve further once Australia phases out of drought, especially given the current high prices in the US and strong international demand.

Cattle prices would have to increase to around 750¢/kg to be comparable to the highs of the 1970s – an unlikely event, it suggests.

However, if real prices were to exceed 500¢/kg, which is a more realistic prospect sometime this year or next, it would be for only the third time in the past 25 years.