COULD flavour-enhanced dry-aged beef be the next big trend in the hotel and restaurant  food service sector?

An interesting trial is unfolding in Brisbane this month as one of the beef capital’s best-known steak dining restaurants explores a new preparation technique, designed to infuse the smokey, complex flavour of whiskey into dry-aged striploins being readied for service through the restaurant.

The historic Regatta Hotel Boatshed* on the Brisbane River has no less than 18 different steaks featured on its carnivore-friendly menu. About 30 percent of the steak dining options are dry-aged, housed in a large, low-humidity dry-age cabinet on display in front of diners.

A showcase Whiskey Beef lunch featuring the new infusion process being held on 16 February sold out within days of being posted on social media a few days ago. However regular Boatshed diners will be able to sample the whiskey-infused steaks afterwards, as the item will continue to feature on the restaurant menu. 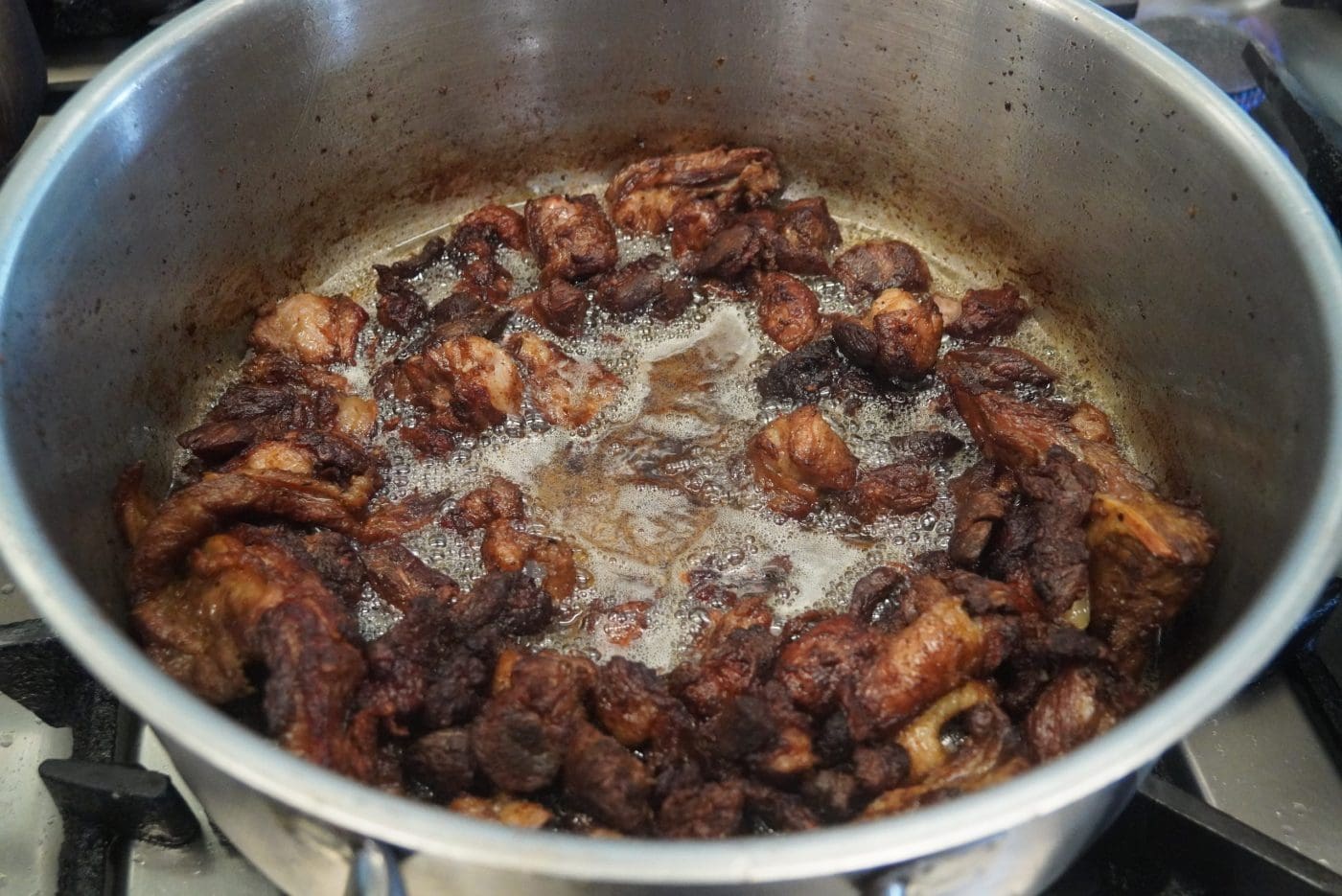 Beef Central stopped off at the Regatta Boatshed yesterday to have a look at this interesting and unique process first hand.

Under the technique, beef fat from larder-trimmed cuts is rendered-down into a clear tallow form, before a substantial quantity of whiskey is emulsified into the liquid. The equivalent of half a bottle of whiskey (a blend of Scottish, American Makers and Japanese Yamazaki, each bringing its own distinctive flavour profile) is added to each five-litre batch of liquid beef tallow.

The resultant liquid has a distinct meaty, whiskey scent to it.

The tallow is kept warm-enough not to solidify, and is then ladelled over a chilled (3 degrees C) striploin primal, where, as these photos show, it quickly solidifies into a creamy, smooth ‘skin.’ Three aged whiskies from Scotland, Japan and the US are used in the infusion process

The process is repeated up to five times to build-up a protective coating, not unlike the way wax candles are made, which helps push the whiskey flavour through the meat while protecting it during the dry-aging phase.

The product then goes into the dry-age cabinet for 40 days, before the solidified lard coating is removed and the primal trimmed and portioned into steaks for conventional grilling.

The protective coating is designed to eliminate the evaporation of the whiskey flavouring on the surface of the meat before it has the chance to fully penetrate (humidity levels in the dry age cabinet are typically around 50pc). Lochlan Alexander applies the first of several layers of whiskey-infused beef fat to the whole striploin. Click on image for a larger view

“Originally we tried injecting a whiskey-based liquid solution directly into the primal, similar to using a brining needle,” he said.

“We tried wrapping that in a muslin cloth and then spritzing it with the whiskey marinade while in the dry aging cabinet.

“All this is still all very much an experiment, but we are now trying this flavour-enhanced larding approach,” chef Alexander said.

“Dry aging is one of the talking points among diners at the Boatshed, and we have changed that up a little through this whiskey-infused process,” he said.

To his knowledge, the flavour enhanced larding process had not been tried on steak cuts like this before in Australia.

“We know the process will work – we have done similar things before, and the whiskey flavour will transfer into the meat itself after 40-days dry aging – it’s just a matter of how much and how well,” chef Alexander said. “We are still feeling our way in the whole process, but we’re encouraged by what we’ve learned so far.”

So why choose whiskey over another distilled or fermented alcohol for the process?

“I think the whiskeys’ smokiness and complexity will match well with the beef,” he said, “but there is no reason why we could not also try red wine or gin, for example. There are so many ways we could take this, if the consumer reaction supports it.” The finished product ready for the dry-age room

He thought striploin was a better option to try the new process on, rather than rib-eye, because of the cut’s elongated shape and larger surface area.

“I think we could struggle to get the flavour penetration through a rounder rib-eye primal.”

The cooking process for the whiskey-infused striploin on the chargrill is exactly the same as any other steak, chef Alexander said.

He conceded that there was additional production cost involved in producing a whiskey infused dry-aged steak, as well as a little more labour and prep-time, but the hotel’s liquor suppliers had come to the party in helping offset that raw material cost.

As a result, the cost per serve at the Boatshed will be kept at an approachable $55-$60, in the middle of the menu’s steak price spectrum.

The idea is that patrons will have the option to pair their whiskey-infused steak with one of the three whiskies being used in the infusion process. JBS is the principal supplier of beef to the Regatta Boatshed, ranging from yearling to 150-day grainfed and Wagyu.

The product chosen for the new flavour-infused dry-age program ‘experiment’ is JBS Pure Prime, a 150-day grainfed, British-based product with a minimum marbling requirement of score 3. The product is being produced out of JBS Dinmore, Beef City and Riverina (formerly Rockdale) in southern NSW.

JBS business development manager Denis Conroy said dry aging itself had been around now for ten year or more, but the process being trialled at the Regatta was about pushing the limits of what can be done with quality beef at the restaurant/steakhouse level, in novel and interesting ways.

This was the first time he had heard of this process being used in Australia.

“The Regatta is out there, looking to market and promote beef in new and different ways, and this is a good example of that. We do a lot of work with them for that reason – because they are leading the way in looking to explore beef in new and novel ways. This is great to see.”

* The Regatta Hotel’s restaurant name, Boatshed, is derived from the precinct’s spiritual place as the home of schoolboy rowing in Brisbane. This writer’s former boarding school boat shed was across the road from the hotel on the banks of the Toowong Reach of the Brisbane River, before it was swept away in the 1974 Brisbane floods.