Beef 2021: Red meat industry urges people to get more ‘facts’ in their diet

A new ‘fast-facts’ resource to promote the red meat industry’s credentials and empower Australia’s red meat advocates, has been launched this morning at Beef 2021. 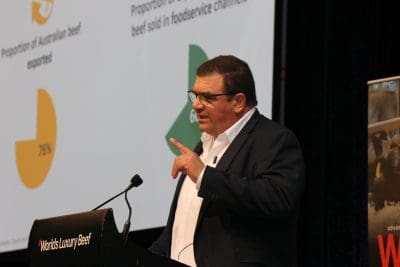 MLA managing director Jason Strong said while Australia’s red meat industry had world-leading production systems, was the custodian for half of Australia’s land mass, and played a vital and sustainable role in feeding people worldwide – but frustratingly, misconceptions, inaccuracies and criticisms of our industry continued to gain traction.

“Never has it been more important for us to work together across our industry to be proactive and positive about what we do with the facts to counter any negative narrative,” Mr Strong said.

“The reality is, our industry is leading the way in the challenge to lower emissions, to improve productivity, to constantly improve animal welfare and in doing that, we produce a uniquely nutrient-dense and natural protein of the highest quality,” he said.

“It is vital our industry is transparent and proud of our ongoing achievements in caring for our land, animals and products, with the evidence to back it up.”

With this being front of mind, MLA has produced Red Meat, Green Facts, bringing together clear, evidence-based messages to empower Australia’s red meat advocates on topics such as the environment, animal welfare, nutrition and plant-based fake meats.

“For MLA, this work around red meat positioning forms a critical part of our current strategic output,” Mr Strong said.

“Our consumer and community insights continue to show that perceptions of the red meat industry are improving,” he said. “However, consumers are less informed about the specifics, and are increasingly turning to a wide variety of sources for information. The red meat industry has a good story to tell, and if we don’t start to tell it a little better, it’s a given that someone less qualified or with an anti-meat agenda will.”

Underpinning Australian red meat’s popularity and quality are the world-leading practices that its producers use on-farm, every single day.

“We want our story to reflect the positivity of our industry’s contribution – around long-term sustainability, people’s health, growing our economy and leaving the land in better shape than we found it,” Mr Strong said.

“That’s how we will resonate with the community most successfully. We want those in our industry to use this as a basis for engaging in conversations with your communities and networks.

“Let’s be on the front foot, let’s be positive about what we do, let’s be proud of what we produce, and let’s be passionate advocates in the promotion our industry.”

The latest initiative follows the original Red Meat Green Facts package launched by MLA back in 2010 – an environmental communications program that was supported by a national media campaign in metropolitan newspapers, a consumer website, social media activity and a public relations campaign.

Five Green Facts about the red meat and livestock industry:

Also coinciding with Beef 2021, MLA has released its Sustainability Update 2021.

As a service provider to the Australian red meat and livestock industry, MLA is regularly asked about its sustainability investments and how they support global and industry’s strategic objectives.

This document outlines these objectives and captures in one place the significant level of MLA’s investments in sustainability across the red meat supply chain. The report demonstrates industry’s investments in sustainability, its commitment to transparency of its production systems, and its unwavering focus on continuous improvement through proactive adoption and practice change.

MLA has a broad program of work and investments around sustainability across the red meat supply chain as aligned to industry’s priority areas. Sustainability includes the production of livestock in a way that is environmentally, socially and financially responsible with respect to people, animals and natural resources, today and for future generations.

To read a copy of MLA’s Sustainability Update 2021, click here.