Michael Crowley opens the producer panel session and forum at the Red Meat 2019 in Tamworth this morning.

AUSTRALIA’S red meat sector is seeing the emergence of a cultural shift in the way adoption of research and development is conducted, the opening session of Meat & Livestock Australia’s two-day Red Meat 2019 event in Tamworth heard morning.

Australia has a poor track record of driving adoption of research, but this morning’s producer consultation and adoption forum was told that distinct strategies are now in place throughout the research sector to address that. 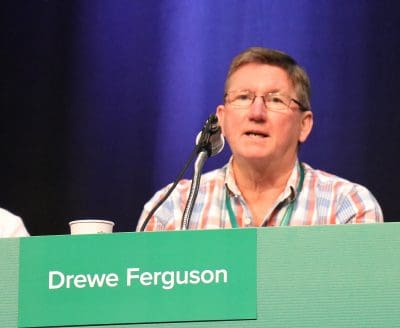 CSIRO livestock systems research director Drewe Ferguson said that while there have been some success stories, one of the areas in which Australia’s innovation community has “failed miserably” was in innovation efficiency – that is extracting value from research inputs and turning it into innovation outcomes.

While Australia ranks 22nd on the global innovation index, it falls to somewhere between 70th and 80th in terms of innovation efficiency, and last of all on the list of OECD countries.

“Clearly we have not been good at achieving higher conversion rates of research output at the end of a project cycle into an industry or societal outcome,” Dr Ferguson said.

‘We have got to get better at that.”

Adoption must start at the beginning

Mr Ferguson said the industry has traditionally treated commercialisation and adoption in a ‘linear way’ –  “we do the research phase first and then we do the adoption afterwards,” he said.

“So obviously now all organisations in the innovation landscape are thinking how we do a better job, and they’re recognising that the process of adoption doesn’t start at the end.

“It has got to start at the beginning of the project phase.

He said all research organisations including RDCs, universities, State Departments and the CSIRO now had a much higher focus around “delivery of impact”.

“You might say well, it’s not rocket science, it sounds logical to me, but unfortunately we haven’t been doing it well enough,” he said. 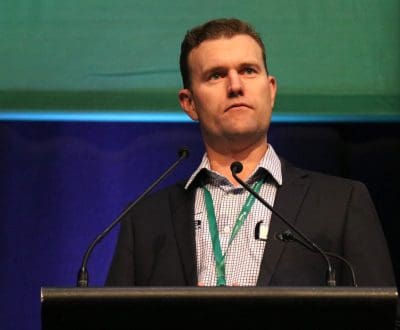 Opening the producer session, MLA general manager – producer consultation and adoption, Michael Crowley, said a change MLA has made in partnership with its producers and is researchers has been to ’embed’ adoption into R&D.

“We’re not investing in R&D without a clear pathway through to adoption and commercialisation of the outcomes of those investments,” he said.

“That is going to shorten up the time from R&D investment through to adoption, and we’re also then aligning our investments in R&D and adoption to directly address the producer priorities that are developed through our regional consultation framework.”

MLA program manager – adoption, David Packer, said the industry did not have the best track record of getting adoption of new research and technology.

“If research is not being adopted, we’re not getting practice change on farm and in the value chain, then we’ve got no return on investment and we’re having no impact on industry

“We need to ensure R&D has a pathway to adoption and where applicable we’re actually embedding the adoption phase within R&D projects so you get a seamless flow once you’re confident in a research output into commercial implementation so we have the greatest opportunity for an outcome.”

He said MLA’s adoption strategy starts with investments in awareness to demonstrate value, and includes initiatives such as the BeefUp forums in northern Australia, the MeatUp forums to kick off in southern Australia in 2020, as well as the Edge network events and Bred Well, Fed Well workshops. Investments are also being made in e-learning platforms and developing short how-to videos for producers unable to attend face to face events.

Strategies include ‘involving and partnering’ through peer to peer, long term (greater than 12 months) supported and experiential learning processes, such as producer demonstration sites and the profitable grazing systems program, which involves 8-10 producers working in groups with the support of a coach over a long period.

MLA has also increased the focus on working with advisors including fam consultants, agronomists, veterinarians, agents and merchandise staff, to help to achieve practice change across the industry.

At the opening Red Meat 2019 social event last night RMAC chair Don Mackay noted that one of the strategies to achieve the goal of doubling the value of Australian red meat sales over the next 10 years will be to double the investment in the extension and adoption space.

The forum also discussed the various was in which producers can influence the direction of R&D expenditure, through their regional research committees which feed into overall research strategies for northern, southern and western Australia.

The forum was the opening session of Meat & Livestock Australia’s two day Red Meat 2019 event in Tamworth, which has attracted almost 700 registrations despite the ongoing challenges producers are facing from drought and fires.