DESPITE greater attention being placed on workplace health and safety across the sector, agriculture remains the most dangerous place to work in Australian industry, recently released statistics show.

While overall trends in workplace injuries are down 29 percent since peaking in 2007, and fatalities down 62pc over the same timeframe, the agriculture, forestry and fishing sector continues to account for a disproportionate number of injuries and fatalities across Australia.

Safe Work Australia compiles its Work-related Traumatic Injury and Fatalities data set each year, providing national statistics on all workers and bystanders fatally or seriously injured at work. The data draws on a range of information sources, including:

Work-related fatalities resulting from diseases, natural causes and suicides are not included.

The reported showed were 3560 serious injury claims across Australian agriculture in 2018. While the number is considerably less than manufacturing (12,925) and construction (13,850), the size of the workforce in each sector must be taken into account.

In the 2018 year, agriculture accounted for 8.6 serious injury claims per million hours worked. Manufacturing, in comparison, accounted for 8.1 claims, and transport and warehousing, 7.7 claims. 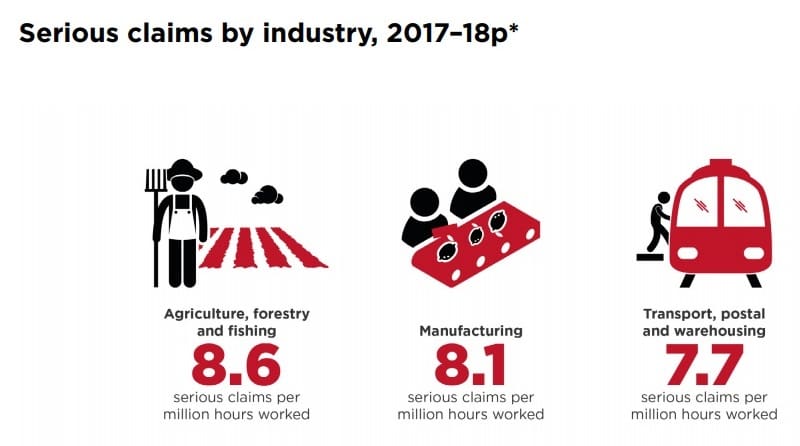 Older workers 60-65 accounted for the highest frequency of serious injury claims among different age groups, but significantly, workers under 20 were disproportionately highly represented, being about 50pc higher than workers 30-34 years of age.

Similar trends are evident in the data on workplace fatalities, listed separately from serious injuries.

Again, agriculture was the most dangerous field in which to work, accounting for 11.2 fatalities per 100,000 workers last year. This was close to double the rate seen in transport and warehousing (5.9), three times the fatality rate seen in mining (3.7), and five-and-a-half times higher than mining (2.0).

In terms of fatalities, vehicle collision was easily the most common cause, accounting for 31pc, followed by being hit by moving objects (17pc) and falls from a height (13pc).

Data in the report refers to serious claims only. Serious claims relate to where the compensated injury or disease resulted in one week or more off work.