WOMEN look set to take on a bigger role in the agricultural sector, with more women than men now studying agriculture and environment related courses as the average age of the Australian farmer hits 61 years old, according to an ANZ Agri Insight report released yesterday.

Marking yesterday as the official International Day of Rural Women, the report fou

nd that women make up just 34 percent of agriculture employees and are estimated to provide about one third of all on-farm income today, compared to a significant 84pc of off-farm income.

However, with the number of women enrolled in agriculture, environmental and related tertiary courses increasing to 56pc, an additional 18,445 female graduates are expected to enter the Australian agricultural workforce compared to 13,646 males.

“Many women have been isolated from the broader industry as ‘silent’ participants on farms, however that trend is slowly changing, as more women gain qualifications in agriculture and related disciplines, and the workforce shifts to an increased formal, paid participation from women,” she said.

“With recent Federal Government changes to the funding for agriculture courses in Australia, it has never been a better time for young women to get into the industry,” Ms Swan said.

On current trends, there was likely to be at least another 48,000 jobs in the Australian agriculture sector by 2030, and of those, 27,000 were likely to be filled by women, including 14,000 in management positions.

The formal, paid employment of women in the Australian agricultural workforce has shown a strong and steady increase for many years, from around 26pc in 1984 to 34pc in 2020, the ANZ report said.

In 1984 women were 73pc of the part-time workforce, but only 15pc of the full-time employed. Similarly, the underemployment rate of females continues to fall and now sits at 8.5pc of employed females, compared with 6.9pc for males. 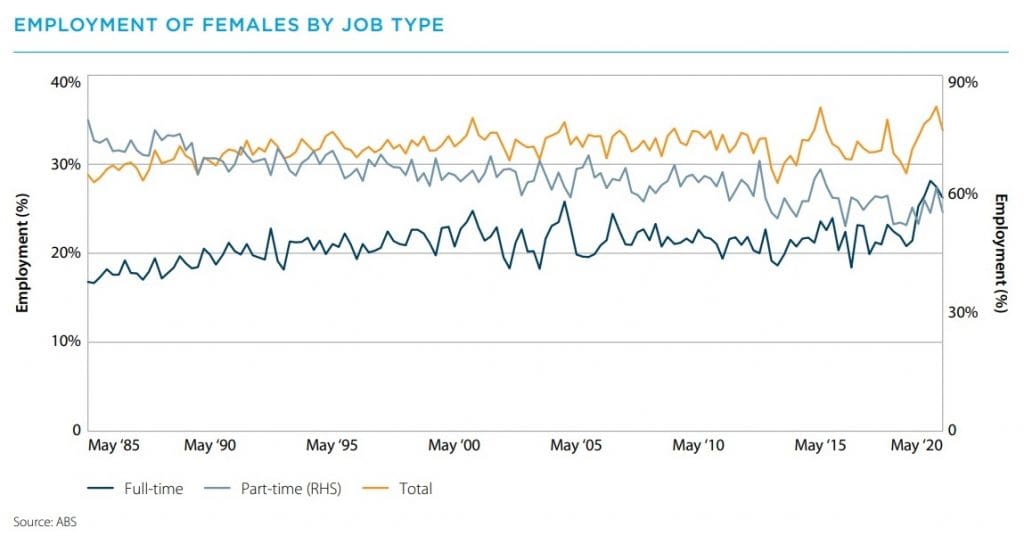 Women made up 28pc of all managers in the agriculture industry, with the latest Agricultural Census in 2016 revealing that more than 50pc of women working in agriculture, were working in a ‘managers’ position. However there is also distinct lack of women’s representation in large corporations and industry bodies, with males making up almost 90pc of rural representative bodies and females only 2.3pc of CEOs in Australian agribusinesses, compared with an average of 17pc across other industries.

Recently, online campaigns such as ‘Buy from the Bush’ and ‘Spend with Us’ have seen women, particularly in drought-stricken or bush-fire impacted areas, able to connect with communities around Australia with potential to supplement their farm incomes selling items direct to city customers.

In its first three months the Buy from the Bush campaign, representing 97pc female owned businesses, provided featured businesses with sales increases of average of 300pc. While the role of women is increasing in formal employment, it is the informal and unrecognised role of women on farms and within the industry which leaves many feeling isolated from their peers and from the support structures in the broader industry, the ANZ report suggests.

The informal role of women takes many different guises ranging from formal paid employment off-farm which contributes to the running costs of many farming enterprises (ABARES estimates that women provide 84pc of all off-farm income) to the contribution made to account management, record-keeping and overarching business advice.

Perhaps the most pervasive problem for women filling those informal roles is that they are not recorded or recognised. Official figures are limited to estimating the amount of domestic work undertaken by women in agriculture as a proxy for the ‘silent’ role of women.

While those figures from the 2016 agricultural census show that 13pc more women in agriculture undertook unpaid domestic duties than the national figure, those figures do not begin to capture the true role of women in the industry

Reducing isolation through education and employment

While significant advances have been made in increasing women’s formal involvement in the agriculture sector, the increase in the percentage of women employed in the sector has stalled in recent years at around one-third of total employment.

There is, however, a trend which is likely to see a new generation of women involved in the sector. While the age of the agricultural workforce continues to increase and many farmers, managers and labourers approach retirement age, many in the industry are asking where the next generation of producers will come from.

Despite a longer-term decline in the number of people employed in ag, the trend since the early 2010s has seen some rebuilding in the number of jobs in the sector. At the same time, the number of women enrolled and completing tertiary studies in agriculture and related disciplines has shown a strong and steady increase. In 2011, there were 22,310 women who had completed a non-school qualification in agriculture. This had increased to 27,384 by 2016 – a 23pc increase over five years.

This compares with an increase of 8pc for men holding non-school qualifications in agriculture over the same period.

On current trends, there are likely to be at least another 48,000 jobs in the Australian agriculture sector – of those, 27,000 are likely to be women and 14,000 of those in management positions.