Queensland Museum Network palaeontologists have excavated Australia’s first head and associated body of a 100-million-year-old long-necked marine reptile in what has been described as the Rosetta Stone of marine reptile palaeontology.

The rare fossil was discovered by a Western Queensland station owner Cassandra Prince, who, alongside two friends, Sally and Cynthia, form a fossil hunting trio called the ‘Rock Chicks’. 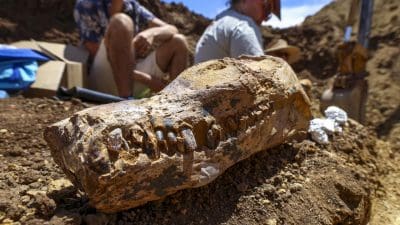 The team of museum palaeontologists recently travelled to the remote site 500km west ofto collect the fossil of the elasmosaur, which is a plesiosaur that co-existed with dinosaurs.

Queensland Museum Network Senior Scientist and Curator of Palaeontology, Dr Espen Knutsen (above), who led the field trip said this would be the first known head and body of an Australian elasmosaur to be held in a museum collection.

“We were extremely excited when we saw this fossil – it is like the Rosetta Stone of marine palaeontology as it may hold the key to unravelling the diversity and evolution of long-necked plesiosaurs in Cretaceous Australia,” Dr Knutsen said.

“We have never found a body and a head together and this could hold the key to future research in this field. 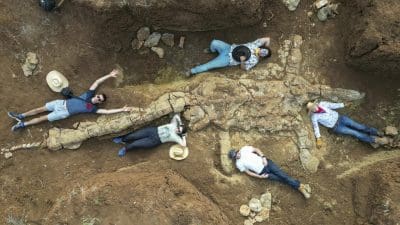 “Because these plesiosaurs were two-thirds neck, often the head would be separated from the body after death, which makes it very hard to find a fossil preserving both together, so we are using CT scanning to give us an insight into these magnificent animals.”

Dr Knutsen’s research into Cretaceous marine reptiles of Queensland is supported by Project DIG, a partnership between Queensland Museum Network, BHP and BMA to unlock knowledge held in the collection for people across the world.

During the early Cretaceous period (between 145.5 and 65.5 mya), much of Queensland was covered in a vast, shallow sea (the Eromanga Sea) and fossil remains of the ocean’s inhabitants, including marine reptiles, such as plesiosaurs and ichthyosaurs are commonly found across the state.

To help answer questions about their origins and ecologies, these new specimens along with modern analytical methodologies will help lift the veil on their prehistoric lives.

Minister for the Arts Leeanne Enoch said Queensland’s remote regions continue to unearth unique and historic fossil finds that help reveal stories of our world from 100 million years ago. 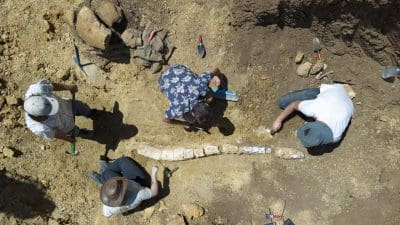 Congratulations to Dr Knutsen, his team and the Queensland Museum Network for uncovering a globally significant palaeontological discovery of an almost complete elasmosaurus which is now located at its new home at the Museum of Tropical Queensland in Townsville,” Minister Enoch said.

“The Queensland Government supports the Queensland Museum Network in its enthusiasm to bring to light new stories, and the recent selection of the museum’s Muttaburrasaurus as our State’s fossil emblem proves the enduring popularity of dinosaur narratives among so many Queenslanders.

“As an important keeping place for over 15 million cultural objects and natural history specimens, the Queensland Museum Network not only plays an integral role in driving innovations in science but its collections, research items and exhibitions are essential to preserving our history to help prepare future generations.

“As we lead up to the 2032 Olympic and Paralympic Games, important discoveries like this Plesiosaur, profile Queensland Museum’s reputation, research and recognition on the global stage,” Ms Enoch said.

“We now hold the only head and body of an Australian elasmosaur in the world, and this significant find will contribute greatly to vital research into Queensland’s Cretaceous past,” Dr Thompson said.

“Queensland Museum Network holds one of Australia’s most complete plesiosaur specimens, nicknamed ‘Dave the Plesiosaur’, which was discovered in 1999, however despite having 80 per cent of its bones, it was missing a head, fins and tail tips.

“Through Project DIG, CT scans and 3D models will help us interpret data and potentially describe a new species.”

This new fossil find could hold the key to unlocking the mystery around Australian plesiosaurs.

Along with the new skeleton, there were also several plesiosaurs and ichthyosaurs discovered and collected on the field trip, which will be transported to Townsville for preparation and further research.

Each year, the Rock Chicks – Cassandra, Sally and Cynthia, meet to search for fossils on the property and during this time have walked hundreds of kilometres on their quest to uncover fossils. During the years they have been thrilled with their finds which have included a plesiosaur each, a kronosaurus, ichthyosaur and several fish and turtles.

Cassandra said they are looking forward to their 2023 hunt and they have a motto of “let’s keep the paleos busy”.

“There are so many people who have helped get these amazing fossils to Queensland Museum including our friends, Tom and Sharon who helped us start digging two of the plesiosaurs,” Cassandra said.

“And we wouldn’t have been able to do this without the help of our little minions Bill, Mark, Remi, Pip, Gwen and Gordon.”

Dr Knutsen is based at Museum of Tropical Queensland in Townsville on a joint appointment with James Cook University.

·       Plesiosaurs, like turtles, are a type of marine reptile. They were not dinosaurs but lived at the same time.

·       There are well over a hundred species of plesiosaurs currently known from across the world. Some had long necks and small heads, some had short necks with giant heads, and everything in between.

·       Like whales, plesiosaurs evolved from land-living ancestors and therefore did not have gills and had to surface occasionally for air. It is unknown how long they could stay underwater for.

·       Most elasmosaurs had slender teeth for catching fish, but not for chewing or crushing. Some plesiosaur fossils have stones preserved in the stomach area, showing they swallowed stones (called gastroliths) to either grind up food in their stomachs or as ballast to aid in diving.

·       Only one species of elasmosaur is currently recognised in Australia, Eromangasaurus australis. However, only a head without a body exists of this of this animal.

·       Dave the Plesiosaur, part of the Queensland Museum Network’s Collection, was discovered near Cape York Peninsula in 1999 and was, at the time of its discovery, one of the most complete plesiosaur skeletons found in Australia with 80 per cent recovered – except its head, fins and tail tip.

Project DIG is a $7.6 million partnership between Queensland Museum Network, BHP and BMA to transform how QMN stores, explores and shares its globally significant collection and research with communities worldwide.

The partnership provides global access to QMN’s invaluable data – access that will see new discoveries and unimaginable collaborations of scientific significance, benefiting innovators, researchers and students and helping to solve complex problems of international significance. The $7.6 million partnership enables Queensland Museum Network to transform how it stores, explores and share its globally significant research and information with students and scientists no matter where they are in the world.

Through Project DIG, Queensland Museum Network, BHP and BMA are working together to give the world access to the museum’s invaluable data – access that will see new discoveries and unimaginable collaborations of scientific significance, benefiting innovators, researchers and students and helping to solve complex problems of international relevance.