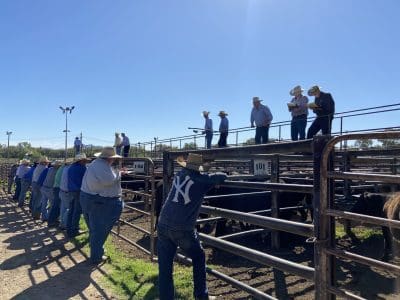 ANOTHER week of widespread rain across the eastern states and high prices at the saleyards has put the squeeze on New South Wales restockers, as supply tightens.

The benchmark Eastern Young Cattle Indicator has started this week with another jump into record territory, closing yesterday at 1,080c/kg carcase weight.

Yesterday’s record was no surprise to agents and buyers at the Gunnedah Saleyards in Northern NSW today, where the red-hot feeder market has been on show for weeks.

This week’s yarding of 1890 was up 1457 head on last week, as the weather cleared at the weekend and allowed trucks better access.

But newly minted president of the Gunnedah Stock & Station Agents Association, Stephen Carpenter, said numbers at the saleyards were well below the average – reflecting the low numbers of cattle in the area.

“There’s still some people who have no cattle leftover and there’s still a lot of heifers being killed so the herd rebuilding is not happening as quick as people think.”

Tamworth-based livestock agent, from Davidson, Cameron and Co, Luke Scicluna also said a lot of producers were electing to sell heifers to lotfeeders instead of joining them.

“There is a lot of heifers that will end up in the abattoir this year, which is amazing because we are trying to build numbers up after the drought,” Mr Scicluna said.

“Most of the calves in the district are July and August drops, so there isn’t any nice runs of local weaners coming on the market yet.”

With a tight supply of light cattle suited to re-stockers, Mr Scicluna and many other NSW producers have been heading to Qld to buy.

“The reason we have gone up there is because there is a lot 240 to 300kg cattle that have a big frame for their weight, so there are good weight gains with all the grass in NSW,” he said.

“The Qld cattle are selling for the same rate per kilo as local cattle, and overall cost more with the freight bill to bring them home.

“But if someone wants 100 steers it’s pretty hard to find big numbers here, because most of the cattle are going to feedlot entry-weight.” 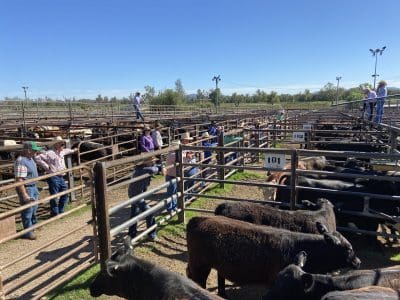 Mr Scicluna said he was watching recent rain across Qld closely and suspected it was going to tighten supply of restocker cattle.

“We have been heading up to Blackall, Longreach and Dalby and we had planned to go back up there next week for a run of sales,” Mr Scicluna said.

“But we will have to see if it is worthwhile because I suspect a lot of the Qld producers will be trying to keep them at home.”

While prices for finished cattle significantly increased at the sale, the price of feeder cattle were similar to recent weeks, which was still at record highs.

Local producer Keith Perrett, who sold a pen of yearling heifers for $5.75c/kg, said the feeder market was hard to go past.

“We normally grow our cattle slaughter weight, but with the feeder market so strong we have been selling them lighter,” Mr Perrett said.

“Anyone who has been purchasing cattle throughout the year and turning them over for the feedlots would have been doing pretty well.”

Mr Perrett said large numbers of Queensland cattle, which were purchased earlier this year and late last year, were starting to show themselves in local markets.

“We’re seeing a different style of cattle coming through the Gunnedah Saleyards, with a lot of crossbreds from Qld,” he said.

Could the prices be peaking? 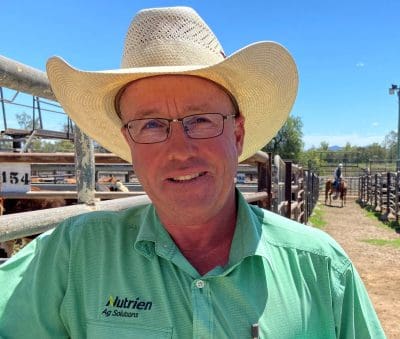 The cattle market has been the source of speculation all year and has been consistently exceeding expectations.

Nutrien Ag Solutions Gunnedah livestock manager Scott Cooper said it was hard to see the prices increasing too much more.

“We’ve reached a level where we might be peaking, it has been fluctuating but a lot of that is due to breed and quality,” Mr Cooper said.

“Traditionally we don’t see too many Bos Indicus cattle here, but there is a lot of them at the saleyards now, they are being accepted by the market and selling well.”

While Mr Cooper suspected the feeder market was peaking, he said he could not see prices dropping any time soon.

“We are going to have a massive summer now, most of the eastern seaboard is good now except for some dry patches in Qld,” he said.

“Limitations on travel to procure stock don’t really exist anymore, especially with the rise of the online market, so there’s so much competition.”