While showers were reasonably widespread this week, the biggest falls have been in the New England, the North Coast and South-East Queensland. With all those areas expecting more significant rainfall before the end of the week.

Grain growers have had the most notable impact from the rain, with falls interrupting harvest and damaging crops.

The Gunnedah Saleyards had to cancel this week due to flooding in the Namoi River and yards like Inverell saw a significant decrease in numbers from last week. The Gunnedah agents will meet on Monday to decide on next week’s sale. Larger weekly sales in southern Queensland like Roma and Dalby have had reduced yardings for several weeks due to rain impact, but have continued to operate.

Jim Ritchie from Nutrien Harcourts in Glen Innes said while the rain had limited summer crop plantings, the rain was good for pastures and was likely to keep a high demand for cattle.

“A lot of the area is still understocked with the really good season we have had and the high prices,” Mr Ritchie said.

“I can’t see people paying much more than what they were for cattle after this rain, I think the market will hold.”

“You wonder where the market would have gone if the cropping areas had the magnificent crops they were expecting,” he said.

“They may have been looking for cattle to go on stubble, but now I’m not sure how that is going to play out.”

Harvest conditions better in the west than the east

The seasonal hopes of broadacre farmers after good winter conditions have turned to fears of how to cope with downgraded crop quality following several weeks of skirting around inclement weather.

There’s no smooth transition of harvest this year from north to south, nor rapid ripening and drying of crops before the headers roll by. The rain forecast map tells the story of two opposite sets of conditions. Western Australia, which presently is about half way through a big harvest appears on the forecast map to have a clear run at getting the crop in the bin.

Last week the main handler in WA, CBH, took in 2 milllion tonnes of the 6Mt presently in the bin from current crop.

By contrast the eastern states have pockets of fine harvest conditions but the forecast for New South Wales is worrying. There is little good to be said for the rain just now.

Flour millers have one chance to secure the wheat for milling for human consumption and their windows of opportunity in the north west and central west have been problematic. 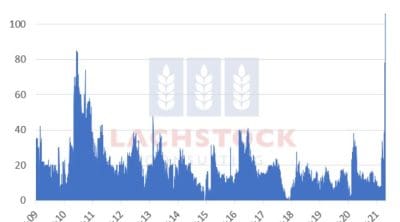 Price premiums for milling grades have gone off the chart this week as wet weather disrupts supply causing downgrades. The numbers shown here are Port Kembla APW1 compared with AGP in $A/t. The previous spike was in the wet 2010 harvest.

Grain markets tell the story of price premiums between stockfeed grade and milling, usually a handful of dollars per tonne, having blown out to something like $100/t.

Similar events are unfolding for brewers and maltsters where clean dry barley is all important. The oilseeds domestic crusher too relies on ready access to local supply of canola.

More rain is on the outlook, with the Bureau of Meteorology yesterday declaring a La Niña weather pattern.

With the countryside already soaked, Stephen Carpenter from the Gunnedah Stock and Station Agents’ Association said he was prepared for more rain impacted yardings.

“It reminds me a lot of 1974 where it doesn’t have to rain much for the river to come up and we have a flood every couple of weeks,” Mr Carpenter said.

“This week was the first time we have cancelled a sale in a long time and we will address next week’s sale on Monday.”

While the flooding caused a delay this week, Mr Carpenter said the long-term impact of the rain was a positive one.

“We have already had such a good season and high cattle prices have put money back in producers’ pockets,” he said.

“This water security will set us up for a long time.”