Teys Australia, the family business built from a single butcher shop into the second largest meat processor and exporter in Australia, was last night inducted into the 2014 Queensland Business Leaders Hall of Fame. 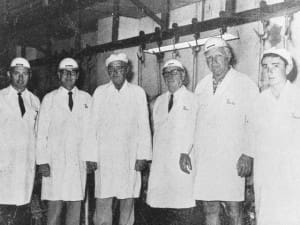 Teys Australia and five other Queensland business leaders from past and present were inducted into the Hall of Fame by Governor of Queensland Penelope Wensley during a black-tie gala event at the Brisbane Convention Centre last night.

The awards celebrate those organisations and individuals who have enhanced the state’s reputation and economy.

When Cid Teys saw his three younger brothers, Cliff, Max and Mick, return from serving in World War II in Papua New Guinea and struggling to find work, he bought a butcher’s shop to start a family business.

Today, 68 years later, that family business operates six processing plants in Queensland, NSW and South Australia employing around 4300 staff and turning over around $2.5 billion a year.

Cid’s son Allan Teys, the current chairman, and his son Brad, the chief executive and third generation to be involved in the company, are proud of how far Teys Australia has come. Fifth generation descendants are already working in the business.

“By about 1954 we had acquired a plant at Beenleigh and we were processing about 300 cattle a week. Today we are processing 32,000 a week,” Allan Teys said.

“It is amazing growth, but everything has been brick-by-brick. So we’ve grown, consolidated, grown again when it made sense, and it’s all on a solid foundation, which gives the company strength.”

The success of Teys has not gone unnoticed and the business has enjoyed partnerships with some of the industry’s heaviest-hitters. A long-standing partnership with the Packer family ended in 2011 when Cargill, the world’s biggest agricultural company, entered into a joint venture with Teys. 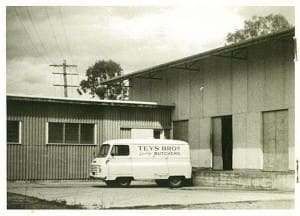 First Teys Bros delivery van 1960. Click on image for a larger view, and see gallery at base of page.

But the company has worked hard to retain the humility typical of its “Queensland character,” Brad Teys said.

“We like to fly under the radar. We don’t blow our trumpet and when we do something right we just sort of put it in the back pocket … that Queensland-based psychology runs through the business,” he said.

QUT deputy vice-chancellor Professor Peter Little said Teys was an inspirational example of how hard work and innovation could transform a small family business into a flourishing industry leader.

“Teys Australia is a quiet achiever with an incredible story of growth in what is a key area of the state’s economy. They are a worthy inductee into the Queensland Business Leaders Hall of Fame,” he said.

“And with an increasing demand for meat from the developing world, the business is well-positioned to continue thriving in the next chapter of its rich history.”

State Librarian Janette Wright said the Queensland Business Leaders Hall of Fame was an important initiative in remembering, recognising and re-telling the stories of businesses and individuals who had played a vital role in the state’s business landscape.

The Hall of Fame space resides within State Library of Queensland, while the digital story collection is available online at www.halloffame.slq.qld.gov.au

Other inductees into the 2014 Queensland Business Leaders Hall of Fame last night included: