Q Fever vaccine demand is only the “tip of the iceberg” 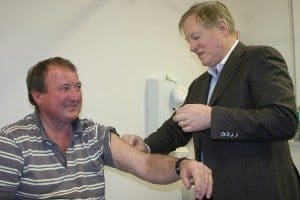 He said the current Q Fever vaccination program being run by the Hamilton (VIC) Medical Group was at least partially kick-started by the recent ABC Landline program about the debilitating disease.

“You don’t have to be in the wool capital (Hamilton) in order to get Q Fever and probably the incidence in this area is quite low. But it is such a serious disease that when you get it, it has such major consequences, both with the acute illness and the follow-on problems, which include a chronic fatigue-type syndrome or the development of heart valve abnormalities,” he said.

“That aspect is so serious that vaccination is being recommended as the way to go and Australia is one of the few places that has a good vaccine program that’s available.

“It has been provided free of charge in the past, but that was for a short period of time (in 2001),” Dr Ford said.

According to the Australian Q Fever register, Q Fever is caused by a bacteria called Coxiella burnetii. The main carriers of the disease are cattle, sheep and goats, but also camels, llamas, alpacas, rodents, cats, dogs, birds, kangaroos, wallabies and other marsupials. The bacteria can survive harsh conditions and remain in the environment for long periods of time, so hay, dust and other small particles may also carry the bacteria.

The Q Fever organism is highly infectious – exposure to as little as one to ten individual bacteria may be sufficient to cause infection in a person.

The register’s website says rural populations are generally considered to be at higher risk than urban populations, but people in the city may still be exposed through contact with wildlife and pet animals or through indirect contact with contaminated soil or other material.

Q Fever symptoms include high fever, chills, headache, extreme fatigue, nausea, muscle and joint pain and severe sweats. Some people have substantial weight loss. Many sick people will require time off work. As many as 10-20 percent of people with acute Q Fever illness may go on and develop signs of chronic fatigue called Post Q Fever Fatigue Syndrome (QFS). A smaller number of people may develop severe illness such as pneumonia or endocarditis and other conditions.

Q Fever’s impact should qualify it for subsidy

Dr Ford said Q Fever’s impact should be regarded as equal to that of other diseases for which vaccinations are provided free to the public, such as for influenza, pneumococcal disease, diphtheria, tetanus, polio, hepatitis B and the human papillomavirus. A vaccine for shingles is to be made available for the elderly next year.

“In terms of the number of people who get it and the seriousness, yes. It’s a low incidence, high-impact problem.”

Dr Ford said Q Fever vaccinations were provided as part of a free vaccine program at Hamilton several years ago.

“By having people talk about it over the last 3-4 months, we’ve realised there is a need which wasn’t being met. So we thought we would run a single vaccine program,” he said.

“We decided we would try with 30 people (at the beginning of August) and that was booked out within 24 hours. We started the second group of 30 people last week and we’ve already got another 30 people for a third lot if we need to run it,” Dr Ford said.

The cost for the screening blood and skin test and vaccination at the Hamilton clinic is about $240 per person, which covered the blood test, pathology, doctor, nurse and vaccine costs.

“What we’ve had is a lot of agricultural-type employers paying for their staff to have it,” Dr Ford said.

Casterton livestock carrier and former shearer Mick Smith got his Q Fever vaccination at the clinic this week and said it should be made subsidised by the government for everybody, especially young people working in agriculture.

Mr Smith believed with sheep and cattle regularly being transported across interstate the risk of Q Fever infection was higher.

Hamilton demand only the “tip of the iceberg”

But despite the willingness of some rural employers to pay to protect their staff from the disease, Dr Ford said the Hamilton program was only treating “the tip of the iceberg” by vaccinating “early adopters” in the area.

“Most people, individuals, and probably the ones most at risk, are not going to pay.”

These would include self-employed shearers, wool handlers and agricultural workers on small farms, he said.

“Don’t forget 60 or 90 people vaccinated is actually quite a small number when you consider the population at risk.”

Dr Ford said the risk of catching Q Fever existed even in semi-urban areas close to farming areas. He quoted the case of a girl who died in suburban Canberra after contracting the disease, possibly from infected dust in dry years.

“With climate change the dust is likely to increase, isn’t it?”

When the last subsidised vaccination program was run, Q Fever was thought to be a disease affecting mainly abattoir workers and livestock handlers, he said.

But the disease has moved from being just an agricultural illness to an environmental disease, making it an issue for people who live in outer suburbia and country towns.

Dr Ford said he was surprised Federal Health Minister Sussan Ley told the ABC last month she would keep a “watching brief” on the disease, but was not prepared to support a vaccination program at this stage.

“I think you would have to argue that it is something that a vaccine should be ready for.”