Keen amateur runners and Queensland feedlot operators Barb and Don Madden will be hitting the pavements of New York on November 1, and are looking for a charity to support along the way.

The husband and wife team from Smithfield feedlot near Proston, in Queensland’s South Burnett district have raised $3000 so far* with donations from Feed Central, Ken Mills Machinery and Smithfield Cattle Co. 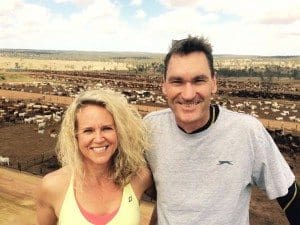 They are now calling for all South Burnett not-for-profit community groups to apply and let them know why they need the money.

Having never run a marathon before, Barb thought it would be a great way to celebrate Don’s 50th birthday and “give them a little challenge.”

“Little did I know, this would be a life-changing event for both of us,” she said.

“Our 12-week marathon program has become our new way-of-life. The 3.30am starts and covering anywhere up to 35km before work is now our new norm.”

Living in Proston, there is only one suitable road to run along, which includes multiple cattle grids and negotiating various forms of wildlife.

Drink stops have been established at the 11km and 21km marks, which involve water bottles tied with wire over a fence post.

Tim Ford from Feed Central liked the concept of two local lotfeeders tackling the NY Marathon, and he wanted to sponsor Barb and Don to run this event.

“We all thought, this money would be better utilised by donating it to a community group within the South Burnett,” Barb said.

“So all we ask is for any interested Incorporated Not-for-Profit organisation to contact us and outline, who they are, what they do and why they deserve the $3,000.”

The winner will be announced Wednesday 28 October, so get creative.

Those wishing to donate to the cause can contact Barb on the same email address.

* Update: Beef Central is happy to report to readers that since today’s daily news alert was issued 90 minutes ago, the Maddens have received a further donation of $1000 from Performance Feeds. That now takes the charity tally to $4100. Are there any other takers?