There have been contrasting results in the Northern Australian grazing property market over the past fortnight, partly driven by both buyer and vendor expectations over price.

The auction of Chudleigh Park, a large scale North Queensland breeding property northwest of Charters Towers, stalled without a bid – or even a single bid-card being registered – when auctioned in Townsville on Tuesday. 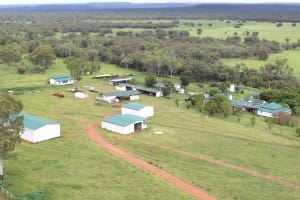 There were no registered bidders when 182,000 Chudleigh Park was auctioned on Tuesday

Vendor, well-known cattleman Peter Camm, bought the extensive property for about $28 million in 2007. The result was regarded as a huge sale at the time, with the broader northern property market losing momentum since then due to market conditions and drought.

Chudleigh was offered on Tuesday with about 18,000 breeders, considerably less that when it last changed hands.

Elders Charters Towers rural property marketing agent Lorin Bishop, who handled the listing, said the auction event attracted a decent crowd, and included three or four stakeholders – all local cattlemen – who have previously shown interest in Chudleigh. At least one was actively bidding when the property was last sold in 2007.

The vendor is yet to put a post-auction reserve on the property, and until that happens, it is difficult to gauge price expectations, as no auctioneer’s bid was posted on Tuesday.

Chudleigh is a large block by local standards, covering some 182,000ha including about 40,000ha of good basalt, plus large areas of well-improved tableland country. Total cattle numbers up to 30,000 head have been run on the property at different times.

As has been seen fairly consistently over the past year or so, any property that was last purchased during the boom 2006-2009 period, is now settling for discounts of somewhere around 30 percent.

One explanation for the disappointing result for Chudleigh may have been a perception that its reserve might still be above $25 million, even with the adjustment in cattle numbers.

In contrast with the Chudleigh auction result, 43,000ha Niall, another well-developed grazing property not far from Chudleigh, sold this week after a tender process for a price understood to be a little less than $5 million, including 3900 cattle.

Buyer was local cattleman, John Lyons, from Wambiana, and there were ‘multiple’ bidders engaged in the tender sale process, instructed through receivers, McGrath Nicol.

Marketing agents Tom Warriner and Rawdon Briggs said Queensland grazing families were re-entering the property market, particularly in the north, due to the increasing strength of the beef sector and low interest rates.

A second Colliers northern listing near Charters Towers, 67,200ha Maryvale, is now closed for tenders, and the consideration period is underway. Instruction from vendors is expected next month. Maryvale attracted ‘a number’ of tender bids, was all Colliers was prepared to say.

Further north, Colliers has seen strong domestic and international inspection interest in another showcase grazing property, 180,000ha Legune, on the coastal plains near the WA/NT border.

The tender deadline for Legune has been pushed out by a month, to June 11, with latest inspections as recently as yesterday, with more planned next week. There are two reasons given for the tender extension: the extent of inspection interest, and the fact it is taking offshore interest groups time to get to Australia to make an inspection of the property.

Legune is owned by a partnership representing four Queensland investors with strong cattle and agribusiness connections. Brian McLean from McLean Farms is the chairman.

With live export steers still making 210c/kg ex Darwin, more Top End grazing property is about to enter the market, as vendors see strategic opportunity to sell while the market is on a pronounced up-cycle.

Colliers will shortly announce marketing plans for another large NT grazing holding, well-positioned to supply the Darwin live export market. It, too, will be offered by tender. Full details on Beef Central in coming weeks.

Colliers International’s Rawdon Briggs, who handled the marketing of Maryvale, Niall and Legune, is convinced that for many typical northern grazing properties, tender presents a better marketing option than auction, in the current market environment.

“The only blocks that seen to be selling currently under auction conditions that I’ve seen are high quality buffel grass country in Central Queensland,” he said.

“For some other asset classes, including larger properties, we think tender is currently a better option. There’s a tendency for buyers to want to take their time looking, and to do their due diligence, which is better aligned with a tender process than auction.”

“Auction will return one day, when demand and supply are different, but we don’t think it will be this year.”

In another recent Charters Towers district property result, receivers for Kilclooney, west of Ingham have sold the property in two parcels for a price understood to total around $3.15 million.

The Kilclooney parcel was bought by David and Sandy Leggatt for $2.3 million, while the East Creek title to the north was settled a few weeks ago to Steele Johnston from Upper Stone near Ingham, went for around $850,000. Agents were Elders.