LIVESTOCK producers have been crowding into halls and conference venues around the country to learn more about their changing responsibilities under new Livestock Production Assurance biosecurity rules and Johne’s Disease management arrangements.

Similar meetings have been attracting full houses and booking out in advance and yesterday’s meeting reflected the same trend, with a capacity crowd of 100 people filling the DPI venue to learn what new biosecurity requirements will mean for them.

From October, new on-farm biosecurity and animal welfare components are being added to the Livestock Production Assurance accreditation process. At the same time new arrangements for managing Johne’s disease in Australia are also being introduced.

For both systems producers are being asked to fill out and file self-assessable on-farm biosecurity plans.

More information on the forthcoming changes and answers to frequently asked questions can be found via the Livestock Biosecurity Network here and on the Animal Health Australia here.

The LBN has done 40 sessions already in Queensland in collaboration with other groups, with another 13 in the pipeline.

In July and August there were upwards of 15 in New South Wales, Victoria and WA, some of which were hosted by LBN, some by NSW Local Land Services and some by Livestock Health and Biosecurity Victoria. There are at least another 30 in the calendar for the remainder of August and through September.

Rachael O’Brien from the Livestock Biosecurity Network said most meetings so far have attracted 90 to 100 people. Over 4000 producers have already attended information sessions in Queensland alone.

The key message for producers is to complete an on-farm biosecurity plan and have it in place by October 1.

How many have filled them out already? Rachael said that in the first 10 workshops held about 450 along producers did their plans on the day.

“At the information sessions most people seem to have it 90 percent sorted in their heads, so it’s just a case of collecting information when they get home to support their answers.”

Some of the issues raised and discussed at yesterday’s forum in Toowoomba included:

There is no “new” NVD, just an electronic version being introduced: 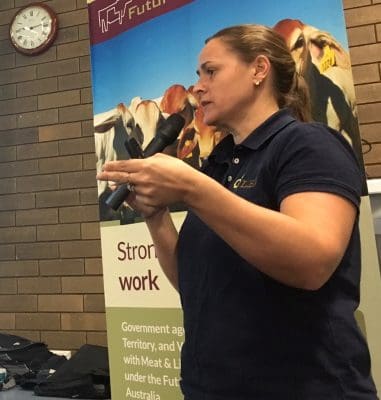 Rachael O’Brien from the LBN said one of the most common questions she was asked is when the new NVD is coming out.

However, there is no new NVD coming out. The only change is the introduction of an electronic version of the same NVD.

Importantly, she said, producers could continue to use their existing NVD books if they preferred.

“That is generally what everybody is panicking about, that the paper versions are going, and they are not, so it is business as usual,” she told yesterday’s audience.

“If you don’t want to use the online version, you don’t have to, that is the take home message.

“If you are somebody that prefers paper then it is still business as usual for you to still buy your NVD books.”

The new system will also help to identify the number of active cattle producers in Australia:

One question that is surprisingly hard to answer in today’s digitally connected, electronically-identified Australian cattle industry is how many active cattle producers there are in Australia.

The latter number is based on the number of Property Identification Codes (PIC) currently in circulation.

However, it is also believed that many PIC numbers currently accredited with the LPA may now be old and no longer active.

One by-product of the new requirement for producers to renew their LPA accreditation will be the role it plays in helping to provide a more accurate picture in future of the actual number of producers and current PICs active in the industry.

If Johne’s is low impact, why does Australia still need to manage it?

It has been acknowledged many times before that Johne’s is a low-impact disease in Australia, and causes no known health impacts to humans.

So why not totally deregulate it? Why still impose the burden of a J-BAS system on producers?

Rachael O’Brien said the key reason Australia’s cattle industry still needs to manage Johne’s is because Australia has export partners and markets that want to cattle to be declared free of Johne’s Disease.

Japan for example is still trying to Johne’s so it does not want Johne’s affected animals entering its country. “So if we didn’t manage Johne’s, that would be a market that would be straight up not available to us,” she said.

“That is why we still have to manage it. There are other places as well that don’t want this disease in their breeding animals.

“Indonesia is another that has more stringent expectations when it comes to taking breeding animals from Australia. So we have to do something about it, which is why JBAS was thought of.”

An integrity system still based on an honesty system: Can all producers be relied upon to tell the truth about their Johne’s status?

Producers yesterday questioned how the new Johne’s Beef Assurance Score system can have integrity if it relies upon people to tell the truth about their own Johne’s status, and to ‘mark their own homework’ in effect.

One producer made the point that the main deterrent to producers doing the wrong thing was that they could be sued by another producer in future. However, this threat was undermined by the fact it was extremely difficult to prove the actual source of a Johne’s infection, given the bacteria’s ability to live for a long time in the environment, and many different sources in transit, at sale or on property could provide possible points of infection.

In response the meeting was told that in Queensland (the state where yesterday;s meeting was held), recent changes to State legislation imposed a “general biosecurity obligation”, which meant that people are expected to take “all reasonable and practical measures to prevent or minimise a risk”. (It is important to note that biosecurity laws can vary from State to State)

“If you know you are infected, you know you have a problem, but you continue to sell animals, and you break someone else’s herd down, then there is come back on you,” Rachael O’Brien said.

Biosecurity Queensland’s David McNab said people could lie, but producers should use their biosecurity plan to identify what they can do on their property to manage the risk of Johne’s disease.

“Decide what your risk is and buy that certain status of cattle,” he said.

Going forward producers had to be careful about what they buy, and, if they choose to bring cattle of a lower J-BAS status onto their property, that they keep them separated from higher J-BAS status cattle.

They were also urged at the meeting when buying cattle from herds of J-BAS 7 or 8 status to ask to see the test results underpinning that status.

In response to a question from the audience Mr McNab acknowledged that small peri-urban producers not involved in the industry professionally but who bought and sold cattle online did represent a potential risk in the biosecurity system.

However, while the LPA was voluntary, the cold hard reality was that even if producers sell cattle on Gumtree without an NVD, the buyers would have the risk of not being able to on-sell the same cattle themselves.

“Because even if someone buys something cheap off Gumtree and they eventually then want to put it through the saleyard, they still need their LPA accreditation, because a buyer can’t buy off someone who doesn’t have an LPA accreditation because they can’t provide the NVD that declares those cattle are HGP-free and chemical residue free etc.

“But, you want to put something in the food chain, you basically you need to be LPA accredited

“That is what it comes down to, you are producing food at the end of the day, all of your product ends up on someone’s plate and if you want to do that, then you need to step it up and that is what the LPA quality assurance system is all about.”