The trade marked certification logo approved by the ACCC. Click to enlarge.

Ceres Agricultural Company turns off in excess of 100,000 MSA-graded cattle each year from 15 properties and a 5000 head feedlot in NSW.

It describes itself as Australia’s largest red meat producer “utilising a hybrid feeding model”, which involves growing and finishing cattle on grass with unlimited access to supplementary grain rations in the paddock.

In opposing Ceres’ application, industry groups argued the use of ‘grainfed and grassfed’ in the proposed Trade Mark would be misleading to consumers, because hybrid grass and grain production systems did not meet the minimum requirements of existing industry grassfed or grainfed certification programs.

Consumers were prepared to pay a premium for grassfed product, the Cattle Council submitted, and it would be a concern if products produced under a ‘grain and grass fed’ system could be marketed as grass fed, when they had clearly had access to grain.

ALFA told the ACCC there is strong industry consensus around the description of products that are unable to be certified as grass fed or as grain fed. National Feedlot Accreditation Standards (NFAS) required that beef must have been produced from cattle fed in an NFAS Accredited Feedlot for not less than 100 days to be called ‘grainfed beef’.

AUS-MEAT said it was important that beef labeled as ‘grain fed’ be sourced from production systems consistent with this long-established industry-accepted definition of grainfed beef.

The industry groups argued there should be a single set of standards adopted by the entire industry and prescribed by law.

However, the ACCC overruled the industry groups and accepted Ceres Agricultural Company’s application:

“The ACCC does not consider that use of the ‘grain and grass fed’ descriptor would suggest to consumers that products bearing the Ceres CTM are compliant with these other grain- only or grass-only standards,” the ACCC wrote in its judgement.

“It is clear from the descriptor that the cattle’s diet is not based on a solely ‘grain fed’ or solely ‘grass fed’ production system or diet.

“Rather, it conveys that the cattle’s diet has consisted of a mix of grain and grass.”

Approval of the CTM by the ACCC only relates to use of the CTM in Australia. 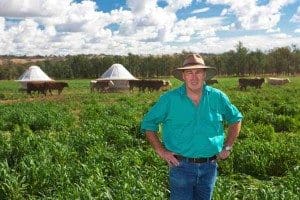 Ceres Ag’s Mark Mason in one of the 300 pasture-based finishing cells at Gunyerwarildi, near Warialda.

Ceres Agricultural Company manaing director Mark Mason said the company was “very pleased with the outcome and the opportunities it will create for us”.

As a result of the ACCC approval, the Registrar of Trade Marks at IP Australia advertised its acceptance of the “Certified Free Range Grain and Grass Fed” CTM last Thursday, February 8.

There is now a two month opposition period where parties and members of the public can oppose the registration of the CTM. If no party objects, it becomes a registered CTM.

Ceres has previously explained that its ‘hybrid’ production system enables it to turn off large volumes of consistently high quality beef at a fraction of the cost of conventional grain feeding systems.

An opportunity for the ‘vast middle ground’

The company estimates that similar production systems are used by the majority of the 60,000 plus cattle producers in Australia, and says producers, processors and retailers have long indicated a market demand for a certification scheme for hybrid feeding options.

There has certainly long been a debate about whether beef from this vast “middle ground” of cattle that are not pure grassfed or pure grainfed should be able to be branded or marketed under terms such as ‘grain assisted’ or ‘grainfed and grassfed’ for example.

The issue draws fierce debate from proponents on both sides whenever it emerges.

Lot feeder and former ALFA president Kev Roberts has argued that lot feeders “fought bloody hard” to be able to use the term grainfed to differentiate their product as a clearly defined segment, underpinned by rigorous standards and independent third-party audits.

Any development of a ‘grain assisted’ tag or similar would muddy the waters for true grainfed beef, he has told Beef Central in the past: “My fear, under any ‘grain assisted’ tag is, how much grain? How long spent on grain? It’s going to be impossible to police, and could in fact damage the very solid reputation that true Australian grainfed beef has in the marketplace.”

However others have argued that this is an important truth in labeling issue: Don’t consumers have a right to know how a product was raised, and whether a piece of beef originated from cattle there were 100pc grassfed, certified grainfed, or raised on a mixture of grass and grain, they ask?

Ceres: Industry didn’t act so we did

Ceres Agricultural Company says it has been working with the industry to try to develop a certified trade mark for hybrid feeding systems since 2005.

The company said it was advised in 2014 by MLA to ‘go it alone’, because there was no industry funding available for such a program, nor was there an appetite within the industry to establish any form of differentiation for grain assisted type cattle, despite producer and customer interest.

Ceres said in its application the industry had had years to develop such an initiative. After working with other producers to engage with industry groups and motivate them to undertake such an initiative, Ceres said it had lost patience and decided to pursue a certification system of its own.

“It is only as a result of discussions with MLA and out of sheer frustration with the fact that not one of the many industry bodies were willing to discuss such an initiative, that Ceres invested in its own private standard in order to meet the demands of its customers and the industry generally.”

‘A meaningul standard to differentiate grass and grainfed beef’

Ceres Agricultural Company told the ACCC its proposed ‘Free Range Grain and Grass Fed’ Certification Trade Mark will provide a meaningful standard to differentiate the vast majority of products within the red meat industry which are produced on a hybrid pasture and supplementary grain feeding model.

It was developing the mark to meet market demand and ensure consumers have access to clear information regarding the feeding system used in production.

Ceres Agricultural Company managing director Mark Mason told Beef Central that other producers will be able to sell their cattle under the trade mark provided they comply with the production standards that underpin it.

The program will also be independently third-party audited, he said.

The system would require participating producers to meet requirements that ensure the health and welfare of cattle, allow cattle to roam in a free range environment, confine cattle only for purposes of health and welfare rather than intensive production, and to access a diet of both grain and pasture to ensure optimum performance and health animal health and welfare outcomes.

It would also have requirements surrounding environmental, traceability, eating quality and food safety outcomes. Other versions of the trade mark would allow further differentiation along breed lines and or further raising claims such as freedom from HGPs and/or antibiotics.

Ceres Agricultural Company told the ACCC that its certification for grainfed and grassfed cattle would promote competition: “Restricting consumer information regarding the production methods used by most Australian producers, including via certification under the FPAS Standard, would substantially limit competition in the sector.”

The ACCC noted in its review that industry had over the past two years, through the Australian Meat Industry Language and Standards Committee, developed an Animal Raising Claim Framework for Beef Production Systems in Australia in consultation with all sections of the industry. This would include a new “Fodder Fed” standard to cover the type of production systems contain in the Certified Free Range and Grass Fed CTM rules.

The ACCC said it noted that Ceres’ work to develop its standard pre-dated the establishment by industry of the Fodder Fed standard.

“The ACCC considers that producers should be able to compete by innovating or differentiating themselves by establishing, adopting and/or promoting different standards provided that the CTM rules accord with consumer expectations about what the CTM means.

“Adopting an approach that prevented a new CTM being registered if there was already a widely accepted CTM in place would inhibit producers’ ability to do so and would be inconsistent with the Trade Mark Act.”

The ACCC noted in its summary that there is currently no prescribed standard for grain fed or grass fed production systems concerning beef cattle raised for domestic consumption.

ACCC: Not our role to choose between different standards

The ACCC said it was not its role to choose between different sets of standards.

It said it was satisfied in this case the Certified ‘Free Range Grain and Grass Fed’ CTM rules provide that cattle are free to roam in open pastures most of the time while consuming a mixed diet of grain and grass.

“Industry through the Australian Meat Industry Language and Standards Committee (AMILSC) continues to engage with the ACCC to ensure that the Australian red meat industry standards are well understood and utilised appropriately in our domestic and export markets,” Mr Bloxsom said.

“Industry looks forward to meeting with the ACCC later this month to discuss the current approval process of agricultural CTM Applications.”